The company on Tuesday announced plans to buy back up to 10 per cent of company shares after reporting full-year revenue of $1.54 billion (up 21 per cent) and a net profit decline of 34 per cent to $211.1 million. Seven West Media’s preferred measure of success – earnings [before interest, tax, depreciation and amortisation] – climbed 35 per cent to $342.2 million.

“These results mark the strongest financial performance by our company in over a decade and reflect the successful completion of the group’s three-year strategy,” Seven West Media boss James Warburton said. 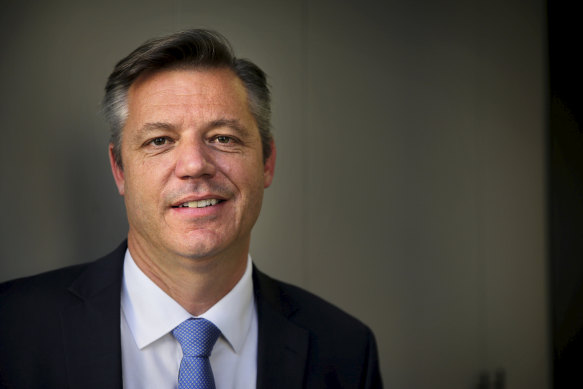 Seven chief executive James Warburton said the result was the strongest for the company in a decade.Credit:James Alcock

However, investors were not impressed by the numbers, with Seven West shares slumping over 6 per cent in mid-morning trade to 48 cents.

Seven West Media, which owns Channel Seven and The West Australian, did not provide a detailed outlook to investors and analysts amid volatile advertising market conditions. It said excluding the Olympics, the advertising market was down 2 per cent year-on-year. However, Seven’s most recent results were above guidance and consensus estimates.

The company said it had approved a buyback of up to 10 per cent of shares on issue, which will be conducted over the next 12 months. The buyback, which involves a company buying shares from investors in a bid to increase the value of its share price, will be funded by Seven’s debt facilities.

“The Board believes this buyback is a prudent allocation of capital given where our share price is trading, but we will also continue to actively assess growth opportunities, be it acquisitions or investments in organic initiatives where they create shareholder value,” Warburton said.

Net debt at the end of the financial year was $256.5 million, which increased due to the acquisition of regional affiliate partner Prime Media Group last December. Seven expects operating costs of between $1.2 billion to $1.22 billion for the next financial year and is targeting a 39 per cent share of total TV revenue.