Democrats are looking down the barrel of contested Senate primaries in three races that represent their best opportunities to win GOP-controlled seats in 2022.

In Wisconsin, Pennsylvania and North Carolina, multiple candidates are lining up top-flight campaign teams and raising the sums necessary to put together serious campaigns. While there’s no guarantee any of the races will turn contentious or end up calamitous, it’s an unfamiliar situation for a party used to essentially anointing candidates in the most important Senate races.

With the Senate spilt 50-50 and Republicans expecting to mount serious challenges to four Democratic-held seats in 2022, whom the party nominates in the trio of swing states is likely to be critical to its chances of keeping control of Congress’ upper chamber in what is all but certain to be an unfriendly political environment.

“It’s a smart play for 2022 to get as many viable candidates into a race as you can, so the people who win those primaries are proven winners,” said Martha McKenna, a Democratic ad maker and former deputy executive director of the Democratic Senatorial Campaign Committee. “This isn’t going to be an election year when you can win on a fluke.”

While competitive Democratic Senate primaries in recent years are not unheard of, most have occurred in either safely blue states or states where the party had little chance of winning. Few attracted substantial investment from outside groups. DSCC-endorsed candidates have lost just one primary in the past decade, with an overwhelming majority winning by 10 percentage points or more.

But this cycle’s stronger Senate fields ― bolstered by Democrats who won during the 2018 midterm wave and have often already attracted meaningful outside support ― have forced the DSCC to take a step back from picking and choosing in primaries, opening the door for outside groups backing women, progressives, Black candidates and others to potentially shape the party’s Senate candidate slate. 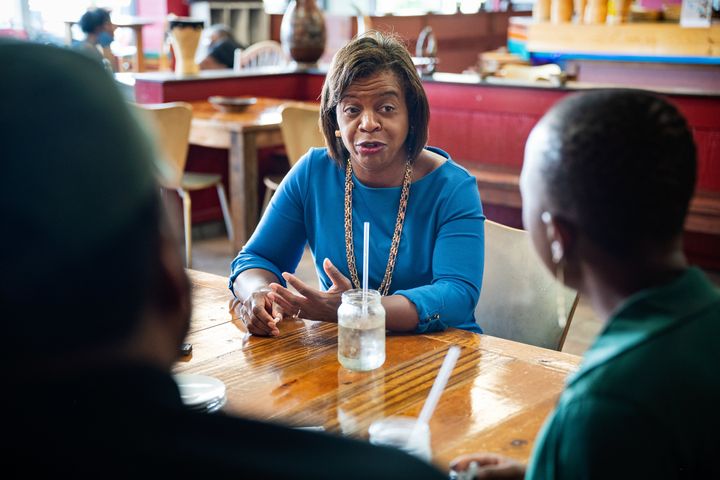 Democratic Senate operatives have long prided themselves on their ability to sing from the same hymnal, often one dictated by Senate Majority Leader Chuck Schumer. This year’s primaries, however, will force them to tolerate more discordant notes.

“It’s been a really long time since Senate Democrats had this number of competitive primaries,” said one Democratic operative who has worked on top Senate races for years. “The Senate consultant world, which is already famously parochial, hasn’t had to do this for a while. People are going to need to learn how to ride the bike again.”

The marquee primary so far is in Pennsylvania, where the seat is open after GOP Sen. Pat Toomey’s retirement. The national reputations of Lt. Gov. John Fetterman and Rep. Conor Lamb are already generating waves of coverage portraying the Keystone State as the home of the next ideological war between progressives and moderates within the Democratic Party.

Moderates have won most of the intraparty clashes since President Joe Biden’s election, but progressives are planning on highlighting the role centrist Democrats have played in downsizing the president’s agenda and preventing progress on voting rights in order to argue they would be more reliable supporters of the president.

“Progressives have as much of a claim to the mantle of Biden Democrat as the moderates do,” said Sean McElwee, the co-founder of Data for Progress and an adviser to the Fetterman campaign. “The history of the past seven months has shown that Biden is the progressive here, and that it’s Joe Manchin who is pulling the agenda to the right. It’s clear to me that a Biden Democrat is a progressive Democrat.”

(McElwee’s mention of Manchin is not a coincidence: Lamb held a fundraiser with the West Virginia senator earlier this year.)

Fetterman and Wisconsin Lt. Gov. Mandela Barnes are seen as progressives’ two best chances to win Senate seats, even if both men face some competition for left-wing votes in their respective primaries. (State Rep. Malcolm Kenyatta has earned the endorsements of multiple progressive groups in Pennsylvania, while Outagamie County Executive Tom Nelson is running as a populist in Wisconsin.)

Other candidates are also adopting progressive priorities ― every candidate running in all three states supports reforming the Senate’s 60-vote filibuster rule, and none of them have betrayed hesitation with Biden’s agenda. Some are going further: Wisconsin state Treasurer Sarah Godlewski has begun pitching her support for an Elizabeth Warren-inspired wealth tax.

But looking at these races through strictly ideological lenses also oversimplifies the complicated world of Democratic primaries ― where identity and attitude often matters as much as issue stances. Democrats in Pennsylvania warn not to underestimate Val Arkoosh, the chair of the Montgomery County Board of Commissioners. Arkoosh is the only woman in the field, and the only candidate from Philadelphia’s suburbs.

In an interview, Arkoosh played up her background as a physician, something she argued would be a political benefit in a coronavirus-era election, and her experience as a local government leader.

She also pointedly noted that 40% of Democratic primary voters were from southeastern Pennsylvania. (Geography can matter more in Pennsylvania primaries than elsewhere, in part because candidates’ home counties are printed on the ballot.)

“I would expect in 2022 it would be an even higher percentage,” she said.

While eager to embrace a geographic identity, she demurred when asked about her ideological positioning. “I just don’t see this playing out as one of lanes or labels,” she said. “I think voters want the candidate who is going to have the grit and the fortitude and stick-to-itiveness to do the hard work that it takes to get legislation passed in Washington.”

Arkoosh raised just over $1 million in her first quarter of the race. While that number trails the more than $6 million raised by the better-known Fetterman, Arkoosh also has the backing of EMILY’s List. The group, which backs Democratic women who support abortion rights, is willing to spend heavily in primaries.

EMILY’s List is backing candidates in all three primaries. It’s supporting former North Carolina Supreme Court Justice Cheri Beasley in her race against state Sen. Jeff Jackson; and backing Godlewski in a crowded primary in Wisconsin. The group’s presence makes it far less likely the DSCC intervenes in any of the primaries ― the two groups are loath to battle each other.

Still, the DSCC’s decision to step back from primaries does not mean it is absent from recruiting. In Florida, the group paid for a poll to help convince Rep. Val Demings, a former police chief in Orlando, to run for Senate instead of governor. It has also pointedly not ruled out endorsements later on in the cycle.

The GOP, which is dealing with contested primaries of its own, is hoping the Democratic primaries cause sufficient chaos to damage the party’s chances.

“Democratic Senate primaries have devolved into a crazed dash to the left as candidates across the country try to out-woke one another,” said Jack Pandol, a spokesman for the Senate Leadership Fund, a super PAC that backs Republicans. “All eyes are on the Democratic establishment and whether they will attempt to squash progressives or simply co-opt their extreme ideas.”