Washington, DC (CNN)By 2020, robots were supposed to be driving our cars and delivering food and other goods to our homes.

These technologies would have proven beneficial in a year defined by the Covid-19 pandemic, where contactless delivery and driverless cars would help keep humans out of harm’s way. But none of these long-promised technologies are ready for widespread public use — and now an opportunity appears to be slipping away.
“I almost view it as a solved problem,” Tesla CEO Elon Musk said of autonomous driving back in 2015. Three years later, in February 2018, Musk said one of Tesla’s vehicles would “probably” be able to drive autonomously across the United States in “three to six months.” Amazon CEO Jeff Bezos was similarly gung-ho on drone delivery in a 2014 interview. He called having drone delivery available in 2015 “a little optimistic,” but added, “Could it be four, five years? I think so.”

But, as of this writing, Tesla has yet to release software capable of handling the entire driving task. Amazon has yet to debut a drone or sidewalk robot delivery service for widespread delivery use.
Sidewalk robots, drones and self-driving cars are largely on the sidelines as the pandemic spurs Americans to stay home and order everything online. Amazon and other delivery dependent companies like Instacart have hired tens of thousands of workers to help pack and deliver groceries and packages instead.

Robotics supporters are quick to point out that it doesn’t have to be that way. With a robot on the job, every delivery is contactless. Social distancing comes naturally.

Every robot has its limits

For years, experts have warned that robots could replace millions of jobs, such as delivery workers. But as the pandemic has shown, these technologies could also help keep humans safe.
“You’ve taken at least one gnarly part of the equation out,” said Sterling Anderson, co-founder of Aurora, which develops self-driving technology and has been invested in by Amazon. “You no longer have a human exposed at quite the rate. On the logistics side, this is a tremendous opportunity.”
Today drones, sidewalk robots and self-driving cars are already being tested for deliveries in at least six states and the District of Columbia. But they only account for a tiny fraction of goods delivered. Amazon, for example, which delivers 10 billion items a year worldwide, says it’s delivered thousands of packages with its sidewalk robots in Snohomish County, Washington, and Irvine, California. 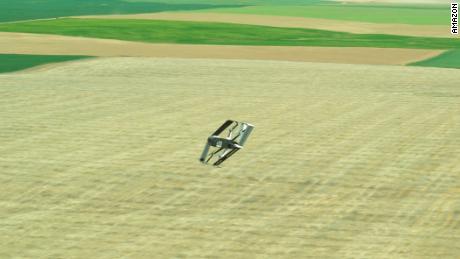 Amazon’s drone delivery service, branded as Prime Air, announced that it made a single delivery four years ago, however.
In May 2019, Jeff Wilke, CEO of Amazon Worldwide Consumer, said the company expected to deliver packages by drone “within months.” But almost a year later, it still hasn’t happened.
“We continue to make progress on Prime Air and look forward to the day when we are fulfilling customer orders in 30 minutes or less,”Amazon Robotics vice president Brad Porter said in a statement shared with CNN Business. “We’re working closely with the FAA and other regulators to make that a reality.”
Pony AI, a Fremont-California-based startup, is using its self-driving cars to deliver packages in Irvine, California. But it only makes about 200 deliveries a day, a similar load to what one human-driven UPS truck does on a busy day.
While the pandemic has created a huge opportunity for robots, the technology isn’t mature enough to seize the moment, experts say. Robots haven’t yet proven they’re safe enough to operate fully independently. 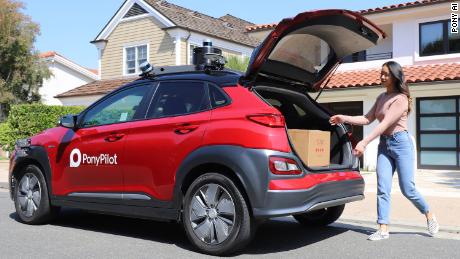 Companies must rely on humans to supervise delivery robots, to prevent mistakes and help the robot out of confusing situations. Pony AI, for example, still has a safety driver sitting behind the wheel, and another human watching its fleet from its offices. Cruise, the self-driving subsidiary of General Motors (GM), has two test drivers riding in its self-driving cars during delivery trips as a safety precaution. As a result, labor costs make operating a robot delivery service cost-prohibitive.
“You might as well get a 10-year-old car, put a person in it and do the same thing,” said Oliver Cameron, CEO of Voyage, which develops self-driving vehicles and offers a ride service in Florida.

While the pandemic represents a missed opportunity to implement these technologies on a mass scale, the engineers working on this technology say they see a silver lining. They believe the pandemic will accelerate the development and social acceptance of robots, as the general public sees how useful they are.
“Moments like these are in many ways tragic. People die,” said Sebastian Thrun, who led Google’s self-driving car program for six years and is now the CEO of Kittyhawk, an electric flying vehicle company. “But they’re also moments that might lead to real innovation. We’ve always done well once we have a situation that causes great pain. We’ve always tried to learn from it.” 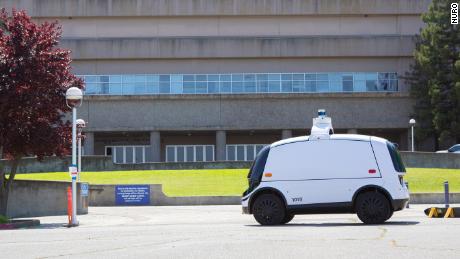 Earlier this week, in Sacramento, California, the Silicon Valley-based delivery startup Nuro lent one of its sleek autonomous pods to deliver medical supplies to a sports arena that has been converted into a makeshift medical facility. Medical workers won’t have to touch the vehicle, according to Nuro, as a remote human operator is watching for a “thumb up,” signal, indicating they should open the vehicle’s doors.
In Ghana, drones from the Silicon Valley startup Zipline are transporting Covid-19 tests. UPS (UPS) recently tested drone delivery in Virginia to see how the robots could help in responding to a pandemic. Wing, the drone division of Google’s parent company, Alphabet (GOOG), has operated a delivery service in Christiansburg, Virginia, since October 2019, and has said it has seen an uptick in deliveries during the pandemic.
Tom Moss, COO of Skydio, which makes an autonomous drone, believes the pandemic will be a catalyzing event for robotics. Ohio’s highway department is using Skydio’s drones for bridge inspections, which helps keep its employees out of close proximity from one another. 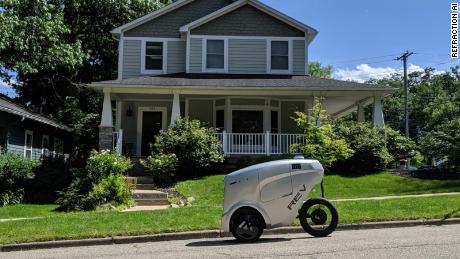 In Ann Arbor, Michigan, eight self-driving robots that resemble bicycles from the startup Refraction are making 50 to 100 deliveries a day, according to CEO Matthew Johnson-Roberson. He said the startup is ordering 20 more robots and hopes to deploy them soon.

The startup has seen an increase in investor interest during the pandemic, Johnson-Roberson said.
“There’s never been a better time to have an autonomous vehicle on the streets than right now,” Johnson-Roberson said. “I don’t see a time when it’s going to be more useful to keep people from having contact with each other.”
Source: Read Full Article