New York (CNN Business)“Mulan” was designed to be a blockbuster in China. But so far, the Disney film is off to a pretty anemic start at the Chinese box office.

According to the studio, the live-action remake of the 1998 animated classic brought in an estimated $23.2 million opening in China this weekend. To put that number into context, “The Lion King,” another live-action remake of a Disney animated film, opened to $54 million in the country last year, according to Comscore (SCOR). The film also brought in less money than Warner Bros.’ “Tenet,” which opened to roughly $30 million in China last weekend. “Mulan” has made roughly $38 million internationally overall so far.
“Mulan’s” opening is disappointing since the film was built for success in China. The film, which stars Yifei Liu, is led by an international cast and tells the story of a legendary female Chinese warrior who disguises herself as a man to fight for her country.

“For a film that was tailor-made for the Middle Kingdom, this lackluster debut has it coming apart at the seams,” Jeff Bock, senior analyst at entertainment research firm Exhibitor Relations, told CNN Business. 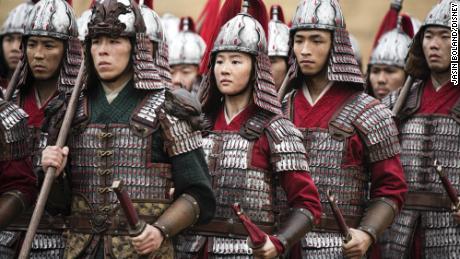 The reasons why the film, which cost $200 million to make, failed to launch in China is likely due to several factors. Predominantly among them is the coronavirus pandemic, which has ravaged the theater industry. About 90% of theaters in China are open and theaters limited to half capacity.

However, according to the analytics firm Gower Street, China is the nation closest to rebounding to pre-pandemic levels and has already had a blockbuster of its own with “The Eight Hundred,” a film produced by China’s CMC Pictures. That film has accumulated more than $300 million in China since its opening in late August.
It also didn’t help that “Mulan” has been mired in controversy.
In the credits of the film, Disney thanked a Chinese government agency accused of human rights abuses in Xinjiang for its help in making the film. This revelation provoked a storm of criticism and caused a backlash online.
Christine McCarthy, Disney’s chief financial officer, acknowledged that the uproar over the film had caused “issues” for the company at a Bank of America conference on Thursday.

And last year, Liu expressed her support for Hong Kong police as they faced allegations of excessive violence against protesters. That led pro-democracy activists in Hong Kong to call on people to boycott the film.
China, the second-biggest movie market in the world, is especially vital to “Mulan’s” success since the film did not have a theatrical release in the US.

After multiple delays, the studio released the film only on its new streaming service Disney+ in the US. To watch the movie, Disney+ subscribers had to pay $30 on top of their subscription fee.
The company has not yet revealed how many people paid for the film on Disney+.
Source: Read Full Article