Supreme Court Justice Ruth Bader Ginsburg, who died Friday at 87, will be the first woman to lie in state at the U.S. Capitol, allowing mourners to come pay tribute to the trailblazing feminist litigator.

After civil rights legend Rosa Parks died in 2005, she lay in honor at the Capitol — a distinction given to private citizens, as opposed to government officials like Ginsburg. Ginsburg, who was the first Jewish woman on the Supreme Court, will also be the first Jewish person to lie in state at the U.S. Capitol.

House Speaker Nancy Pelosi (D-Calif.) announced Monday that the ceremony for Ginsburg, who was the second woman to sit on the nation’s highest court, will be held Sept. 25. It will be by invitation only, to prevent the spread of the coronavirus.

In U.S. history, only 33 people, all of them men, have lain in state at the Capitol, most of them presidents, congressmen or military leaders. Most recently, Democratic Reps. Elijah Cummings (Md.) and John Lewis (Ga.), both civil rights leaders, lay in state after their deaths in 2019 and 2020 respectively.

Only four civilians have lain in honor at the Capitol, including two U.S. Capitol police officers, evangelist Rev. Billy Graham and Parks. 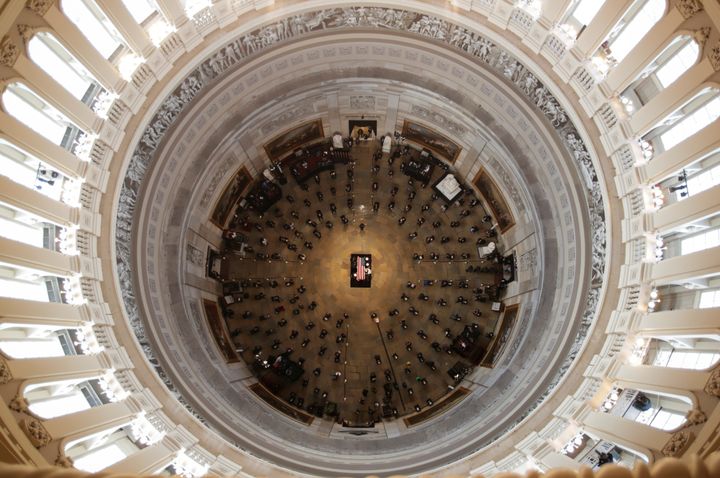 There are no rules or laws that determine who will lie in state, according to the architect of the Capitol — the distinction is determined by the House and the Senate.

With the death of Ginsburg, who was one of the Supreme Court’s more liberal justices, the question of who will replace her has dramatic implications. The court is now split between three liberal justices and five conservatives. If President Donald Trump is able to get another conservative justice confirmed, that would cement conservatives’ hold on the nation’s most powerful court.

Ginsburg’s last wish, dictated to her granddaughter just days before her death, was reportedly that she “not be replaced until a new president is installed.” The justice knew that the matter of her replacement will have major bearing on health care, abortion rights, civil rights and more.

Related News:
Business News:
To Buy or Not to Buy? U.K. House Prices Haven’t Been This Hard to Predict in Years
As 737 Max Returns, the 777X Drags on Boeing Earnings
Biden Announces New Steps To Boost Vaccine Supply
New 23andMe Tool Assesses Risk of Covid-19 Becoming Severe
Only 1 in 10 companies expect all their staff to return to the office when the pandemic dies down, a new report suggests
Recent Posts
This website uses cookies to improve your user experience and to provide you with advertisements that are relevant to your interests. By continuing to browse the site you are agreeing to our use of cookies.Ok