More than 330 Western companies have announced plans to exit or suspend their operations in Russia or stop investing in response to its invasion of Ukraine. The Russians aren’t amused and are threatening to retaliate. 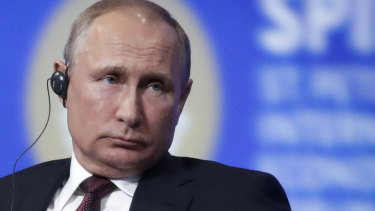 The growing exodus of western companies is another blow to Russia’s decimated economy.Credit:AP

There’s a moral dimension to the extraordinary rush to stop investing or doing business within Russia – a protest against its invasion in keeping with the heightened consciousness international companies now have of the ethical frameworks within which their investors and employees now expect them to conduct their business.

There’s also a set of financial reasons. Russia, for most international companies, isn’t a major market. It’s certainly far less important than their operations in the West. Given the severity of the sanctions the West has imposed on Russia no rational chief executive or their board would want to risk breaching them by continuing to operate within Russia.

Nor would they want to risk the consumer and political backlash they might experience in their more important markets.

The near-40 per cent collapse in the value of the rouble and the inability (thanks to Russia being kicked out of the SWIFT global financial messaging system) to convert roubles to dollars, euros, yen or any other functional currency other than, perhaps, China’s renminbi is another major impediment to business-as-usual.

Moreover, Russia is not going to be a good place to invest for quite some time. Its already-high inflation rate has taken off – it’s up two per cent in a month with some projections that it will peak at 20 per cent or more – and its economy is tanking.

The Institute of International Finance, and others, are forecasting declines of up to 15 per cent in Russia’s GDP this year. That would wipe out 20 years of economic growth.

A sustained suspension of activity in Russia by Western companies, coupled with the sanctions, will undo three decades of integration between Russia and the West and return its economy to what has often, derisively, been described as just a big gas station. In future, however, it could also have far more limited markets for its oil and gas.

Vladimir Putin has conceded that the mass exodus of western companies is damaging and labelled it part of an effort by the West to “wreck” the Russian economy. He’s not, however, going to passively accept the corporate flight.

The Russian authorities have already seized 515 aircraft that had been leased to Russian carriers to prevent them being repossessed, although with the big US and European aircraft manufacturers having cut off parts, maintenance and tech support and Russia’s carriers now unable to fly to most developed world destinations, that’s more retaliation than a response that will protect Russia’s economy. 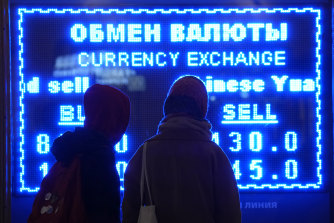 The Institute of International Finance, and others, are forecasting declines of up to 15 per cent in Russia’s GDP this year. That would wipe out 20 years of economic growth.Credit:AP

Putin has threatened to find “legal” responses that would allow Russia to nationalise the assets and operations of companies exiting Russia – to seize their assets – legalise patent and intellectual property theft and arrest any corporate executive in Russia who criticises the government.

He plans to take control of businesses with 25 per cent or more foreign ownership that close or suspend their operations and introduce “external management” (effectively administrators) to keep the businesses operating while they put together assessments of their assets and liabilities. The owners would have six months to sell their shares (in what would be a Russian and Chinese buyers’ market) or restart the business.

For some companies, loss of access to Western management expertise and supply chains would effectively make them worthless in Russian hands. Losing access to Ikea’s flat packs, or Porsche’s cars, for instance, would destroy their Russian businesses. Russian brewers might be able to steal Heineken’s branding, but would it still be Heineken beer?

Marks & Spencer and other retailers have a sizeable presence in Russia through Russian franchisees or others over whom they have no jurisdiction. They can’t stop them operating but they can, and Marks & Spencer has, cut off their supply of products.

Even some of the companies, like Unilever, Proctor & Gamble and Danone, that have pledged to keep operating to protect their employees and ensure essential goods are available to Russian consumers, have also foreshadowed a halt to new investment.

Expropriation of western companies’ assets might look like a rational response on paper but the effects of the withdrawal of the companies, their expertise and their capital and the supply chains supporting their businesses will be material.

Should Russia seize western companies’ assets and businesses or steal their intellectual property the West has the capacity to respond.

There is a lot of mutual destruction occurring from Russia’s invasion and the West’s response. There will be heavy costs for both sides from the sanctions and other efforts targeting Russia’s economy and financial system.

The sanctions on Russia’s central bank effectively froze more than half of Russia’s $US640 billion ($890 billion) of foreign exchange reserves. While only just over $US100 billion of those are in US dollars, when combined with euro and yen-denominated reserves there’s probably close to $US350 billion, at least, that Russia’s finance minister, Anton Siluanov, says Russia has lost access to.

Those reserves invested in assets offshore (other than, perhaps, the $US85 billion or denominated in China’s yuan) might be simply frozen today but they could be made available as compensation to companies whose assets have been expropriated or patents stolen in future.

The White House has said there would be “steps we would take” if the Russians did try to nationalise foreign companies. The foreign exchange reserves and any assets of Russian state-owned companies in the West would be obvious targets for retaliatory measures.

There is a lot of mutual destruction occurring from Russia’s invasion and the West’s response. There will be heavy costs for both sides from the sanctions and other efforts targeting Russia’s economy and financial system.

For the West, however, those costs – higher energy prices and inflation or the losses companies might suffer in Russia – are less direct and far more widely distributed than the economic pain Russia will experience from the massive hit to its economy and currency, the hyperinflation it appears likely to experience and the lost access to much of the war chest Putin thought would insulate his economy from any response by the US and its allies to the invasion.