Dealing with broken bones, bogged vehicles, aircraft engine failures and calling in the Royal Flying Doctor Service are all in a day’s work for Graham and Sandra Scott who own Australia’s most remote pub.

When the couple wanted a change from farming six years ago they bought an outback pub. Selling one of the family farms near Mansfield in Victoria, they moved to the top end of South Australia, near the Northern Territory border. 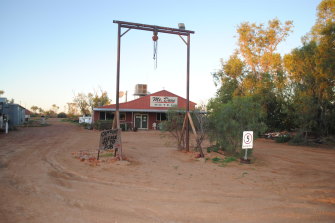 The Mt Dare pub, the last stop before the Simpson Desert.Credit:Simon Johanson

“We were looking to do something towards the end of our working life other than farming, and we needed a change, but we thought we wanted to travel,” Graham says.

Instead, they lodged at Mt Dare on the border of the Simpson Desert, where their closest neighbour is 70 kilometres away, in a family-run pub. Their daughter Shaynee and two sons help with the business.

The hotel, south of Finke and the Old Ghan trail, at the end of a rough 4WD track is a popular watering hole for visitors to the Simpson’s dry, red, sandy desert, the world’s longest parallel dune system that stretches across 176,000 square kilometres of Australia’s red heart.

Its extreme remoteness means the pub is equipped with two dirt airstrips, a light aircraft and an all-terrain Mercedes Unimog truck. Its wide verandahs, workshop, accommodation units and campground are surrounded by a high levy bank to fend off occasional flood waters from the desert.

Like its city counterparts, it was hit by the vagaries of COVID. “We were down 90 per cent,” says Shaynee. 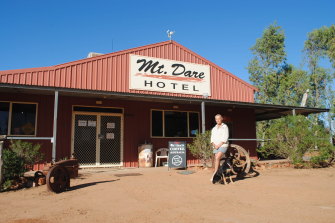 “And then we had the floods hit as well. It’s been a bit tricky for us,” but despite that “we love it, we absolutely love it,” she says.

The family are first responders for the western side of the Simpson Desert and surrounding areas.

The pub is equipped with a Royal Flying Doctors Service medical kit that includes a defibrillator, high-grade painkillers and other essential survival resources.

“We might have the Flying Doctor in to evacuate someone six times a year,” says Graham. “We do get a lot of broken bones coming to us. We get them back here and then put them on a plane.”

It’s not just humans getting harmed in the harsh desert landscape. The rolling red dunes also take a heavy toll on vehicles. “Overall we might do 20 recoveries out of the desert a year,” he says.

“Mostly it’s some form of mechanical breakdown. It could be anything from gearboxes, suspension problems, to a broken chassis.” 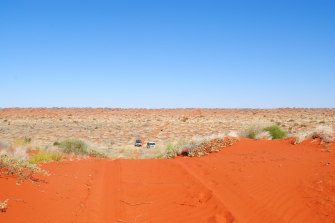 The pub runs a mechanic’s workshop off the same generator that powers the hotel.

Outback publicans are a “town under one roof,” says hotel broker Peter Moore, who flies potential buyers around the red centre to inspect pubs in his Piper Cherokee Six aircraft. “You’ve got to provide every possible service that you would expect in a small town,” he says.

He transacts about four outback hotels each year. They are generally cheaper to purchase and more profitable than their city or regional counterparts, but owners need to manage harsh and demanding conditions: heatwaves, floods, breakdowns and isolation.

“True outback pubs, you’ve got to be a bit unique to own them,” he says. He should know: he now owns and runs the nearest pub to Mt Dare, the Pink Roadhouse in Oodnadatta 200 kilometres away.

Back in Mt Dare, Graeme says many aspiring four wheel drivers have a desert crossing on their bucket list but don’t fully understand how tough the Simpson is, adding he actively discourages some from trying to cross it.

“I can give you a written guarantee we will be recovering you because you won’t make it,” he tells them.

And it’s not cheap extracting vehicles broken or stuck 300 kilometres from the pub in the desert’s heart. A retrieval for a mistake or mishap can cost owners up to $8000.

Last year a family with three children showed up at Mt Dare with no fresh water and ordinary road tyres on their car.

They had a reservation for Birdsville caravan park on the other side of the desert which Google maps told them was 15 hours away, Shaynee says.

“They thought, if we allow a day we’ll be fine,” she says. “They tooted at us going past, but luckily they saw the sign and turned around.”

Others aren’t quite so fortunate.

The Zavros family from Perth made headlines last November after being winched to safety from the desert by a rescue helicopter and taken to Coober Pedy. Their vehicle got bogged and was stranded for days, running low on supplies.

‘True outback pubs, you’ve got to be a bit unique to own them.’

Alice Springs, six to seven hours away in a 4WD, is the source of Mt Dare’s supplies. “That’s our corner store,” says Shaynee. “The only thing we get delivered here is fuel.”

Taipan snakes, the country’s most venomous, frequent the scrub around the hotel along with an array of colourful native birds – Budgies, Finches, Black Cockatoos, Corellas and Galahs.

One memorable occasion three years ago, Graham and Shaynee were flying a newly acquired light aircraft when it suffered catastrophic engine failure and was forced into an emergency landing.

“It was an interesting experience,” Graham, who was the pilot, dryly notes.

Another time, after a heavy rain event, Shaynee recalls her dad heading off in the Unimog towards Alice Springs uttering the ill-fated words that “he’d never bogged the Mog”.

“But the first time he went out, he bogged the Mog,” she says. It required a rescue crew from a neighbouring station to dig him out.

But the extreme isolation doesn’t mean the pub’s not busy.

In winter, when travellers are moving through the desert, it can serve up to 150 meals a night, although in high summer when access to the Simpson Desert is shut, patronage dwindles to next-to-nothing because of the oppressive 50 degree heat.

Graham credits an outback ethos where locals unstintingly help each other with making desert life enjoyable.

The pub’s neighbours – the families and station hands that run New Crown, Andado, Hamilton and Mount Sarah stations – although many miles away, are “just fantastic”, often flying in by light plane for a cuppa and chat.