Robert Charles remembers Colin Powell: ‘One of the greatest men to live during my lifetime’

Former Assistant Secretary of State under Colin Powell Robert Charles remembered his former colleague Monday as a “great man” who didn’t take things personally and was a “friend to all.”

“This was probably one of the greatest men to live during my lifetime,” Charles told “Fox & Friends” following news of Powell’s passing from COVID-19 complications at age 84.

“This is a man who in many ways personified the best of all of us… He was decent and honest with people. Integrity was always at the forefront. He was a self-critic as easily as he was anything else. He never took things personally. I can’t tell you how many times something bad would cross his desk, and he’d say, ‘Well, it’s just someone having a bad day. So on we go with our job.'”

Charles, who served under Powell from 2003-2005 as assistant secretary of state at the U.S. State Department’s Bureau of International Narcotics and Law Enforcement Affairs, said he was not aware of Powell’s COVID-19 diagnosis.

“I’m sort of at a loss, really, for words,” he said. “This is a guy who truly walked the walk. He lived the words that he spoke. He was everything that you would have hoped in — if he was a relative, you would have loved to have him as a relative. As a boss, he was ever a listener but as honest as the day is long, always optimistic.” 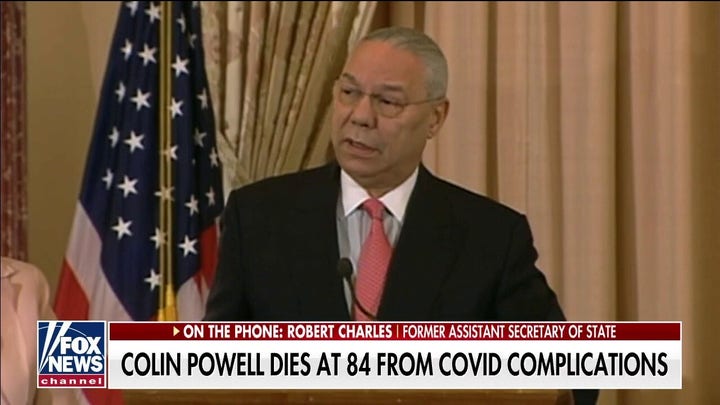 Charles recalled Powell writing his young daughter a handwritten note after she brought a bag of apples to the office.

“If you are good with your people, they will be good with you,” he said. “If you trust them, empower them and have the integrity to constantly be honest with them and honest with yourself, about yourself and about what they do, absolutely anything can be done… God knows this is a man who was beloved.”

“He made absolutely rock-solid decisions that, if he hadn’t, this country would be in a much worse position than it’s in.”

Charles said numerous people have told him over the years they wished Powell ran for president.

“He’s an example,” he said. “There is nobody who was a better leader and no one who was more admired, no one who was more personally, I think, cherished. And that’s the tragedy – is that leaders of that kind are rare. We won’t see the likes of Colin Powell again for some time.”