Democratic Georgia state Rep. Vernon Jones, who has previously aligned himself with Republican lawmakers, will be part of the lineup of speakers at the 2020 Republican National Convention (RNC).

During the four-night convention, the Democratic Georgia lawmaker will try to rally support behind incumbent President Trump and Vice President Mike Pence who are running against Democratic presidential nominee Joe Biden and his running mate, California Sen. Kamala Harris.

The overall theme of the event will be “honoring the Great American Story."

Jones was elected to his current position in 2016 and represents portions of metro Atlanta’s DeKalb and Rockdale counties. However, he made waves back in April when he broke party ranks and endorsed Trump.

The politician stated that he's backing the Republican president because of his support for criminal justice reform and historically Black colleges and universities. 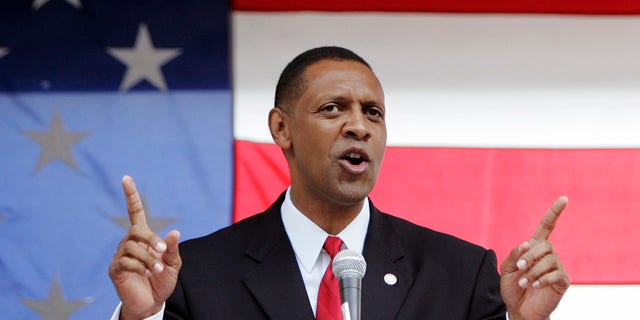 Vernon Jones speaks to supporters as he announces his candidacy for the US Senate on July 21, 2007 in Marietta, Georgia. (AP Photo/Todd Bennett)

"It’s very simple to me. President Trump’s handling of the economy, his support for historically Black colleges and his criminal justice initiatives drew me to endorse his campaign… " he said. "There are a lot of African Americans who clearly see and appreciate he’s doing something that’s never been done before… When you look at the unemployment rates among Black Americans before the pandemic, they were at historic lows. That’s just a fact. "

The endorsement resulted in swift blowback from fellow state Democrats, many of whom publicly said they were making donations to Rhonda Taylor, a community activist running for Jones’ seat in the state’s Democratic primary set for June 9. State Sen. Nikema Williams, chair of the Democratic Party of Georgia, had issued a statement calling Jones an “embarrassment.”

As a Georgia state representative, Jones has aligned himself with Republican lawmakers several times. Since his time in office, he has become one of the president’s “key surrogates” in the state.

Although Jones — who once said he would resign from his post — will complete his term, he has withdrawn his candidacy for re-election.