Mining giant Rio Tinto is targeting an increase in iron ore output in 2021 as prices rise to record highs, but warns the impact of a regulatory fallout from its destruction of the Juukan Gorge rock shelters last year remains unknown. 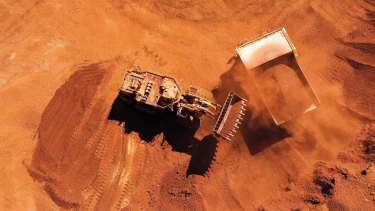 However, Rio cautioned investors that the iron ore target remained subject to weather, market conditions and the fallout from the miner's destruction of ancient caves in Western Australia's Pilbara region last year.

"The future impact on our Pilbara iron ore operations, mine developments and heritage approach from the reform of the Aboriginal Heritage Act 1972 remains unknown," Rio said.

"We will maintain a high level of engagement with traditional owners regarding current and proposed plans for mining activities."

UBS analyst Glyn Lawcock said the market focus would be on Rio's 2021 iron ore guidance and "whether the Juukan Gorge incident has impacted Rio's ability to produce".

Following months of hearings, a joint parliamentary committee probing Rio Tinto's destruction of the 46,000-year-old Juukan Gorge rock shelters released a list of recommendations last month. Among its calls were a WA-wide pause on all new approvals under the state's Aboriginal Heritage Act to disturb or destroy culturally significant sites and for existing approvals to be reviewed.

The price of iron ore, Australia's most valuable export, has surged in recent months to more than $US170 a tonne, driven by booming demand from Chinese steel mills and weaker-than-expected output from Brazilian producers.

Rio Tinto on Tuesday reported that it had shipped 88.9 million tonnes of iron ore from WA in the December quarter, slightly ahead of analysts' expectations.