Mr Wyatt, 47, retired from WA’s state parliament earlier this year after serving as treasurer and Aboriginal affairs minister. He joined the board of oil and gas producer Woodside on Wednesday and will join the Rio Tinto board as a non-executive director on September 1. 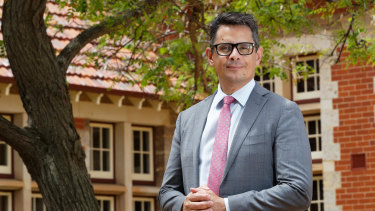 Ben Wyatt will join the board of mining giant Rio Tinto.Credit:Trevor Collens

“With family links to the Pilbara and an impressive track record in public life, Ben’s knowledge of public policy, finance, international trade and Indigenous affairs will significantly add to the depth of knowledge on the board at a time when we are seeking to strengthen relationships with key stakeholders in Australia and around the world,” outgoing Rio Tinto chairman Simon Thompson said.

Rio Tinto’s decision to blow up the Juukan Gorge rock shelters last year to make way for an iron ore mine expansion left the land’s traditional owners devastated, sparked global condemnation, triggered a federal parliamentary inquiry and cost the job of Rio’s former chief executive Jean-Sebastien Jacques. Mr Thompson has announced he will step down within the next year following the fallout from the debacle.

Although it was legally sanctioned, blasting the site went against the wishes of the Puutu Kunti Kurrama and Pinikura (PKKP) people, who said they were not made aware of Rio’s plan to proceed until it was too late to call it off. Rio has conceded multiple communication failures in its engagement with the PKKP and “missed opportunities” that could have prevented the debacle.

More than a year later, Rio’s board and new senior management remain in the process of pursuing sweeping improvements to its approach to cultural heritage and seeking to restore meaningful relationships with Australian community stakeholders including First Nations peoples.

Mr Wyatt, who has Yamatji heritage, on Friday said he had been “deeply saddened and disappointed by the events at Juukan Gorge”.

“But I am convinced that Rio Tinto is committed to changing its approach to cultural heritage issues and restoring its reputation, particularly in Australia and WA,” he said. “I am looking forward to working with the board in building on the momentum for change generated by the new leadership team.”

Rio Tinto, which is dual-listed in Australia and the United Kingdom, has faced simmering criticism from investors and political leaders including Mr Wyatt who said part of its problems stem from losing touch with Australia despite its iron ore mines in the Pilbara accounting for more than 80 per cent of overall earnings.

Some of Rio Tinto’s most prominent local investors have been leading a push for a “more Australian-focused” board with greater sensitivity to the country and its cultural identity.

The rock shelters at Juukan Gorge had evidence of continual human occupation tracing back at least 46,000 years. Ancient artefacts unearthed at the site following the 2013 government approval for its destruction – including grinding and pounding stones, a 28,000-year-old marsupial bone sharpened into a tool and a 4000-year-old belt made of plaited human hair with DNA linking directly to today’s PKKP people – had placed the caves among the most significant archaeological research sites in Australia.