Rio Tinto chief executive Jean-Sébastien Jacques will meet face-to-face with the Puutu Kunti Kurrama and Pinikura people in the Pilbara to apologise over the company's Juukan Gorge rock shelter blast.

A spokesman for the miner confirmed Mr Jacques arrived in Perth two weeks ago and had just completed two weeks in hotel quarantine. 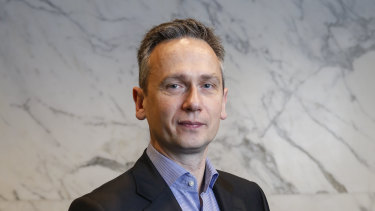 Rio chief executive Jean-Sebastien Jacques’ is in WA for a meeting with the traditional owners of the Juukan Gorge.Credit:Bloomberg

"After the mandatory period in quarantine he was able to spend time with Rio Tinto colleagues in the Perth office," he said.

"He is now headed to the Pilbara where he will have an opportunity to engage with traditional owners and connect with the Rio Tinto iron ore team."

The destruction of 46,000-year-old heritage sites at Juukan Gorge in May triggered widespread condemnation of Rio Tinto and its engagement with traditional owners.

A joint parliamentary committee into the blast has revealed shocking details around the decisions made in the lead up to the blast, including that there were three other options to expand the Brockman 4 mine that would have avoided the gorge.

Rio Tinto opted for a fourth option that contained about $135 million of high-grade iron ore.

On August 28 a former archeological advisor to Rio Tinto, Professor Glynn Cochrane, said meaningful traditional owner consultation was replaced by tick and flick exercises around the same time Mr Jacques took over the company in 2016.

Mr Jacques is visiting the Pilbara to offer his apologies to the PKKP in person and discuss potential remedies.

Unlike other resources bosses such as Kerry Stokes and Santos chief executive Kevin Gallagher, Mr Jacques did not seek an exemption to WA's hard border quarantine requirements. Since the pandemic hit Australia health authorities have been particularly cautious with travel to and from Aboriginal communities.

WA mining sector employees have also been subject to some of the strictest testing regimes in the state with elaborate screening processes in place since March.

"They have a fair way to go but we certainly will be very much facilitating the kind of approaches the PKKP want to do and once we have a clear view of that, we will be very positively disposed to rebuilding this relationship," he said.