How has a chain of videogame stores become a sensation? What’s a short squeeze? And why are hedge fund managers so nervous about it all?

It’s got the makings of a Hollywood flick: an online band of rogues piles into a beaten-down stock to take on Wall Street short-sellers, and deliver a firm “up yours” to the investment establishment.

And, remarkably, as things stand, it actually worked.

Those with even a passing interest in the financial world will no doubt have clocked the drama around GameStop, investors tapping into the online forum Reddit, hedge funds and the sharemarket.

So why is an obscure American video game retailer creating such as buzz? Why are online communities of investors mobilising? And why are professional fund managers now looking over their shoulders?

What is GameStop and why is everyone talking about it?

GameStop is a chain of US video-games stores publicly listed on the New York Stock Exchange. They’re the parent company of the Australian chain EB Games, which can be found in shopping centres and malls across the country.

Like many brick-and-mortar retailers, GameStop has struggled through the coronavirus pandemic, especially as consumers can download games direct to their consoles these days instead of purchasing a physical disc or cartridge.

But against the odds, GameStop shares have surged. They were worth about $US3 in April and by mid-December had hit $US16. In January, things really heated up.

Shares in the company rose more than 1000 per cent to a peak of $US483 ($629) as a community of online share traders – organised via the Reddit forum r/wallstreetbets – piled into the stock.

For these at-home traders – whose approach is often considered “less sophisticated” by institutional investors – buying up GameStop shares hasn’t necessarily just been about making money.

The beaten-down games retailer has become something of a moral symbol that has galvanised retail investors and evoked echoes of the Occupy Wall Street movement.

Essentially, Redditors are taking what they consider a righteous stand against the investment establishment and short-selling US hedge funds. 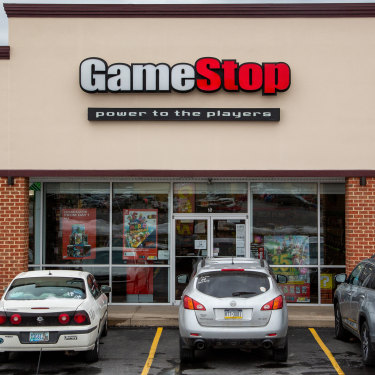 “GameStop: power to the players”: a GameStop store in Pennsylvania. Credit:Getty Images

Wait, what is short selling?

Short selling is a common – but controversial – strategy where investors bet on a company’s share price falling.

A short seller usually pays a fee to borrow shares in a company from a long-term shareholder that they consider to be overvalued, or due for a drop. They then quickly sell these shares back on the market.

If all goes according to plan, the company’s share price will drop and the short seller will buy back the on-loan shares at a cheaper price. They then return the shares to their owner, pocketing the difference.

For example: A short seller borrows $1000 worth of shares in Company A from a banker. They sell the on-loan shares for $1000, hoping the price will fall after they do so.

Company A’s share price does indeed drop amid pessimism around the company, with the $1000 parcel of shares now worth only $400.

The short seller buys the shares back for $600 less than what they sold them for. They return them to the banker, pocketing the $600 profit (less the fee paid to borrow them).

Short sellers have long been considered controversial, including in Australia. While many people view them as a necessary part of financial markets – they have historically helped expose fraudulent behaviour and also provide liquidity – some short sellers have been accused of manipulating markets and ambushing companies.

In the case of GameStop, US hedge funds Melvin Capital and Citron Research were notorious for their “short” positions in the company, and were betting on it decreasing in value during a tough time for physical retailers. So they were hurt badly when GameStop’s share price defied the odds to rise instead of fall, creating a huge “short squeeze”. That is when short sellers rush to close out their positions at the same time, causing a huge upward spike in the share price. 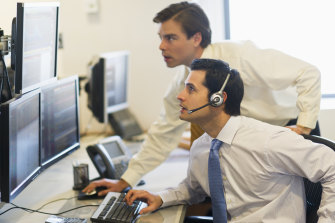 And what is a hedge fund?

Hedge funds are typically private investment vehicles that make risky bets using techniques such as short-selling, or by using financial derivatives and other sophisticated trading strategies. They are distinct from more traditional managed funds.

But hedge funds actually typically get the money for these bets from superannuation funds and their overseas equivalent pension funds which are looking to diversify their portfolios.

What is a short squeeze?

The downside to short selling is that while there are gains to be made, the losses are technically infinite.

You still have to buy them back and return them to their owner.

In the case of GameStop, the company’s share price was driven higher by online traders in an organised effort to smite the hedge funds who were short.

In the end, Melvin Capital and Citron Research both admitted defeat and closed their short positions on the company, buying the shares back at a much higher price than they sold them and suffering huge losses.

As you can imagine, landing such a blow on mega-rich institutions was met with glee from the retail trading army. “Traditional” investors, meanwhile, exhibited a mix of outrage and shock.

Online campaigns against short sellers are nothing new but this latest Reddit-fuelled frenzy has sent shivers down the spine of institutional investors, many of whom called for regulators to step in and prevent this from happening again. 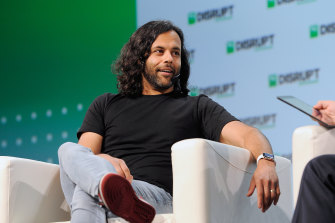 Robinhood co-founder and co-CEO Baiju Bhatt on stage during a conference in San Francisco in 2018.Credit:Getty Images

Robinhood is a smartphone-friendly investment platform founded by Silicon Valley entrepreneurs Vladimir Tenev and Baiju Bhatt in 2013. It was one of the first firms to offer commission-free trading to Millennials in the US, allowing users to trade stocks and options without having to pay fees with each trade.

The app is also an early pioneer of online fractional investing, meaning users can buy a “piece” of a whole share in a company from as little as $1.

Robinhood had been steadily growing over the past five years but started to gain new momentum at the start of 2020, when it added millions of new accounts as locked-down Millennials in the US turned their focus to the sharemarket.

The Robinhood app is not available to Australian consumers, although there are a range of ways that Australian investors can buy US shares. These include via the online brokerage platforms of the big four banks as well as through competitors such as Superhero, which, like Robinhood, are aimed at younger consumers and are focused on low-cost trading. 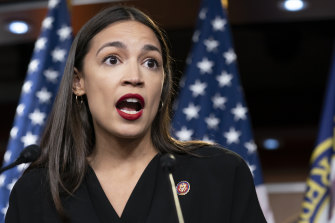 Alexandria Ocasio-Cortez: “This is unacceptable.”Credit:AP

Why were trading in GameStop shares suspended?

In a statement overnight, Robinhood told its users that “in light of recent volatility”, it was restricting trading on a range of stocks including GameStop, Blackberry, AMC Entertainment and Nokia so that users could only sell these stocks, not buy them.

Other trading sites including Interactive Brokers followed suit, also putting restrictions on trading. The trading platforms have cited market volatility caused by the jumps in stocks like GameStop as a reason for the pause. The chairman of Interactive Brokers Thomas Peterffy told CNBC his company was acting to protect the integrity of the market and there were concerns that the onslaught of trading of stocks could impact on clearing systems for shares.

The pause in trading has sparked fury both online and from both sides of US politics, with Democrat Alexandria Ocasio-Cortez and Republican Ted Cruz both questioning the freezing of trades.

Investors and politicians are questioning whether Robinhood is acting in its own interests by restricting trades, however. Reports via Bloomberg suggest the firm has drawn down hundreds of millions of dollars in lines of credit to protect itself in the face of the volatility.

Tenev told Bloomberg Daybreak that no external parties had asked the company to put buying limits on some stocks. 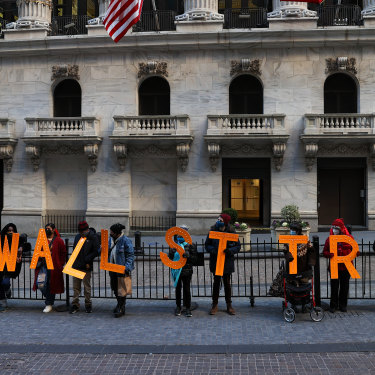 What are regulators doing about this?

On January 27, the Securities and Exchange Commission issued a short statement regarding the “on going market volatility” but did not name any companies directly.

“We are aware of and actively monitoring the on-going market volatility in the options and equities markets and, consistent with our mission to protect investors and maintain fair, orderly, and efficient markets, we are working with our fellow regulators to assess the situation and review the activities of regulated entities, financial intermediaries, and other market participants,” acting chair Allison Herren Lee said.

The US has laws against market manipulation, which bans investors from spreading false information about a stock to increase its price. It’s possible that the US regulator could scrutinise posts in the wallstreetbets subreddit to determine if some of the posts egging on the purchase of GameStop and other stocks breach the law.

However, legal experts in the space have told a range of outlets including The Wall Street Journal that proving market manipulation is very difficult.

What are professional investors saying?

There’s a big split in how professional investors and wealthy entrepreneurs are viewing what’s happening with GameStop.

On the one hand, many are cheering on the reddit traders, pointing out that it is time that everyday investors make their voices heard by finding a new way to play in a complicated system that has often given advantages to professional investors.

Billionaire US entrepreneur Mark Cuban backed the buying of GameStop this week, saying the situation “gives the little guy an edge”. He confirmed said his 11-year-old had made money on Wallstreetbets.

Tesla founder Elon Musk has also been encouraging the trading frenzy in a number of tweets this week.

Chief executive and co-founder of Australian online trading platform Superhero, John Winters, says it’s clear Millennial investors are increasingly well informed and want to “control their own destinies” by investing at a time where cash is giving a lower return than shares.

“I expect we’ll see speculation like this more frequently given the amount of capital flowing into global markets,” he says.

Australian money managers have been warning retail investors that there are risks involved in following the online rush. It’s not clear how long a stock like GameStop can stay at these lofty highs, and whether online traders will continue to buy up indefinitely.

“We all have a pretty good sense of where this ends up,” technology portfolio manager at Platinum Asset Management, Cameron Robertson says.

″I would be encouraging people not to risk money they can’t afford to lose.”