As businesses complained they couldn’t find workers earlier this year, Republican governors cut federal unemployment benefits, including an extra $300 per week that they claimed caused workers to refuse low-paying jobs.

So far, the programs have had a seemingly small impact, according to data provided by states that responded to a HuffPost survey this week.

Arizona told HuffPost it has distributed 760 bonuses, and has nearly 6,000 completed applications.

Colorado is the outlier, having paid out $14 million in bonuses to more than 11,000 applicants, nearly matching the state’s total decline in unemployment claims from May to September.

Connecticut has sent 1,500 payments so far, having received 11,000 applications.

In Maine, 448 workers were “provisionally eligible” as of Aug. 20, the deadline for employers to submit applications on behalf of their new hires.

“We are still in the early stages of processing grant payments, as new hires must first work eight weeks, and then the employer must provide documentation of their wages,” a spokesperson for Maine’s Department of Labor said in an email.

Montana has approved only 1,061 return-to-work payments out of 5,000 applications as of Thursday morning, according to its public data dashboard.

Virginia projected it had reached 500 workers by the end of August, having dispersed $300,000 to 84 small businesses that made payments to eligible workers. Virginia’s incentive is smaller than others — a $500 match to small firms that themselves offer $500 hiring bonuses.

Labor departments in Kentucky, New Hampshire and Oklahoma did not provide bonus information.

Overall, in the six states that provided data, 15,284 workers have been able to get a bonus, most of them in Colorado.

That’s out of nearly 92,000 workers in those states who stopped receiving unemployment from May to September, with an increase of about 173,000 employees in those states during that time, according to Matt Darling, an employment policy expert at the Niskanen Center, a libertarian-leaning think tank.

“It’s a small impact,” Darling said. “It looks like a lot of people that should have gotten this haven’t gotten this.” 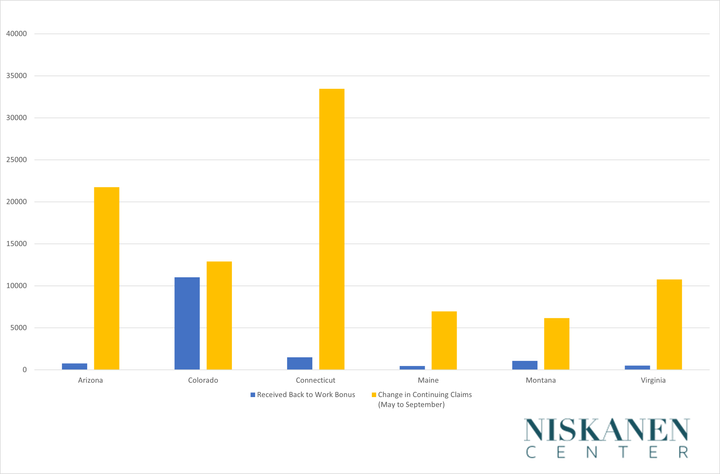 Not everyone who stopped receiving benefits or who gained a job would necessarily have been eligible for a bonus. And the programs haven’t closed yet in all states, so more workers will likely receive bonus payments in the coming weeks as states work through their application backlogs. But red tape could be a major obstacle to more people receiving the payments.

The reason Colorado has proved to be such a success could be the simplicity of its program. When workers get a new job, they opt in to the bonuses on the same portal they used to get unemployment insurance, and report their employer and wages one time.

Connecticut has received its maximum number of applications and stopped accepting new requests in mid-September. The state said it would award the one-time $1,000 bonuses to the first 10,000 workers who got a job over the summer and kept the post for eight weeks. So far, 1,500 people have been approved as having met eligibility requirements.

“Review of applications continues, with another round of checks scheduled to be mailed in the next week or two,” a spokesperson said in an email.

Arizona offers a $2,000 bonus for workers who stopped receiving unemployment before May 15 and worked at least 320 hours between May and September at an hourly wage of less than $25. The state requires applicants to provide pay stubs and employer contact information for eligibility verification.

The paperwork in Arizona might be a bit of an obstacle ― the state said nearly 18,000 applications have been started but not completed. But a spokesperson said the state expects “the expediency by which the bonuses are issued to significantly increase in the next few weeks.”

Montana’s initiative offers one-time payments of $1,200 for people who stopped receiving unemployment insurance and held a job for at least four weeks between May and November.

“We need to incentivize Montanans to reenter the workforce,” Gov. Greg Gianforte (R) said in May. “Our return-to-work bonus and the return to pre-pandemic unemployment programs will help get more Montanans back to work.”

It’s not clear whether the program has had much impact on hiring. The state’s unemployment numbers did not significantly drop after Gianforte pulled federal benefits and instituted the return-to-work bonuses.

The state still has more than 4,000 people receiving unemployment benefits as of the beginning of September, a number that has been steadily declining since March, before the incentive program was announced.

Nationally, there’s been very little data to back Republicans’ concerns that the federal unemployment benefits were a disincentive for Americans to get back to work.

Over the summer, businesses, particularly in the hospitality industry, were hiring at a rapid pace. And wage increases in the restaurant industry, in large part to make up for the depressed wages during the pandemic recession, proved to be a good way to get people back to work. That growth stagnated in August with a disappointing jobs report showing hiring had stalled.

The economy is still missing millions of jobs that existed before the pandemic, and millions of Americans are now receiving significantly less financial support without the federal benefits, which expired this month in the states that hadn’t already canceled them.

HuffPost readers: Did you apply for a return-to-work bonus? Tell us about it ― email [email protected] Please include your phone number if you’re willing to be interviewed.