As Democrats celebrate parents across the country receiving their first checks through the child tax credit, Republicans aren’t quite sure how to respond.

Several Senate Republicans told HuffPost they didn’t have strong feelings about the policy, which was a significant part of Democrats’ American Rescue Plan.

“I’m gonna surprise you ― I don’t really have an opinion on that right now,” Sen. John Cornyn (R-Texas) said.

Last week, tens of millions of American households received payments of up to $300 per child, which they will continue to get each month through the end of the year. Democrats intend to expand the program in their next big legislative package, and they have been bragging about it in a series of press conferences.

At an event on Tuesday with moms who had benefited from the policy, House Speaker Nancy Pelosi (D-Calif.) hailed the credit as “Social Security for our children,” linking it to one of the federal government’s most popular programs of all time.

Initial polling has shown the advance child tax credit is incredibly popular among Democrats and Independent voters, and even wins support amongst a strong contingent of Republican voters.

“Every Democrat voted for this tax credit and every Republican voted no,” Rep. Ted Lieu (D-Calif.) said.

And the impact is already being felt in households across the country — particularly as low- and working-class families can more fully benefit from the credit for the first time. 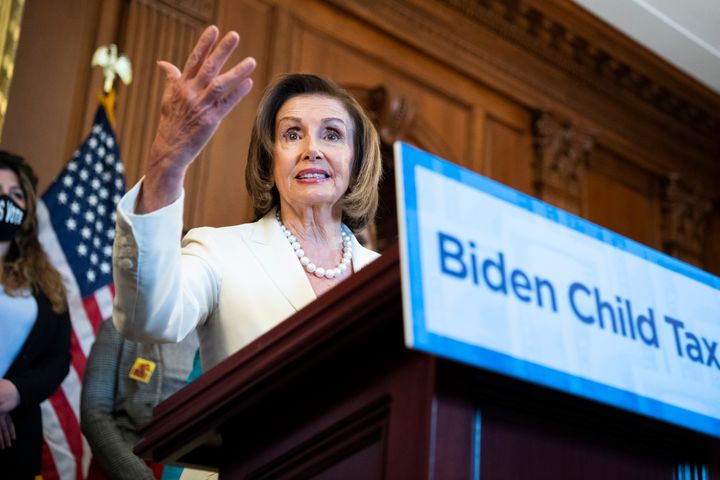 Daniella Knight, a mother of three from Annapolis, Maryland, shared her story at the Democratic press conference, saying the money she received last week will pay for the surgery her 4-year-old needed to dislodge an object from his nose. Knight is a member of MomsRising, a grassroots organization that advocates for better family policies.

“If we didn’t have the child tax credit, then we would have had to rethink camp,” she told HuffPost. “A surgery is very important. We definitely have to pay for that.”

Although they don’t love to discuss it, Republicans helped make the monthly benefits happen. They increased the value of the credit from $1,000 to $2,000 per child in their 2017 tax law, essentially laying the foundation for Democrats to transform it from an annual reduction of tax liability into a monthly benefit. If it hadn’t been for the Tax Cuts and Jobs Act, the budgetary cost of boosting the credit to $3,600 and making it fully available as cash would have been much more significant.

“We expanded it in 2017. We pushed for that. It was my initiative. I even threatened to vote against the tax bill that didn’t include it,” Rubio said. “But what’s in place now is basically just a cash benefit irrespective of whether you’re employed or not. You can call it a tax credit, but that’s not what it is.”

Senate Minority Leader Mitch McConnell (R-Ky.) has also accused Democrats of trying to “break the link between work and income” by making the child tax credit available to people with no earnings.

But not every Republican is sticking to McConnell’s line.

Sen. Rick Scott (R-Fla.) suggested the policy should be more targeted toward the poorest Americans so as to add less to the national debt. Parents earning as much as $150,000 annually currently qualify for the full benefit.

“I think it ought to be focused on the people that need help,” Scott said.

Sen. Mitt Romney (R-Utah), who proposed a similar program earlier this year, suggested Democrats should have immediately made the program permanent instead of saying they’ll do so later.

“Mine was paid-for and permanent, which I strongly prefer,” Romney said when asked how he thinks the current version of the child tax credit is going.

In February, Romney proposed the Family Security Act, which would give families up to $350 per child every month. Instead of a tax credit, Romney’s plan paid the benefits through the Social Security Administration. The proposal would have paid for the benefits partly by consolidating and eliminating other safety net programs, like the entirety of the Temporary Assistance for Needy Families program.

Under Romney’s plan, the benefits would be capped at $1,250 per month, and couples with combined incomes above $400,000 would get less — which would cover basically 90% of all families. The senator didn’t have any Republican co-sponsors on his plan.

Sen. Mike Crapo (R-Idaho), the top Republican on the Senate Finance Committee, which oversees tax policy, noted that Democrats have plenty of other tax proposals that he is more concerned about.

“It’s frankly not one that I am targeting as one of the most egregious proposals that they have,” he said, referring to the child tax benefit. “It kind of depends on the totality of the other tax changes.”

The tepid opposition from Republicans is an early sign that Democrats are succeeding in making an expanded child tax credit — one that serves as an anti-poverty measure in addition to a benefit for middle-class Americans — a more permanent feature of the U.S. tax code.

It’s a policy that’s increasingly hard to object to, particularly as the coronavirus pandemic continues to highlight just how popular direct payments are.

“There were times in my life when I felt really selfish about being a teacher and staying in teaching because I was always living right at the edge,” said Sarah Taylor, a teacher in Stafford, Virginia. “I wasn’t able to help my 26-year-old get established in her adult life. She had to pay her own way. Between the relief funds and with this, maybe I will be able to help my 15-year-old and 16-year-old.”

Taylor also said she expects the benefit will help her classroom. She lost three times as many students in her high school classes over the last year as she would in a normal year because her students, all English language learners, had to prioritize demands at home.

“They had to be at work and help their families survive financially,” Taylor said. “Some of them were doing it to provide child care for siblings. This child tax credit will allow some of them to stay in school and focus on school.”