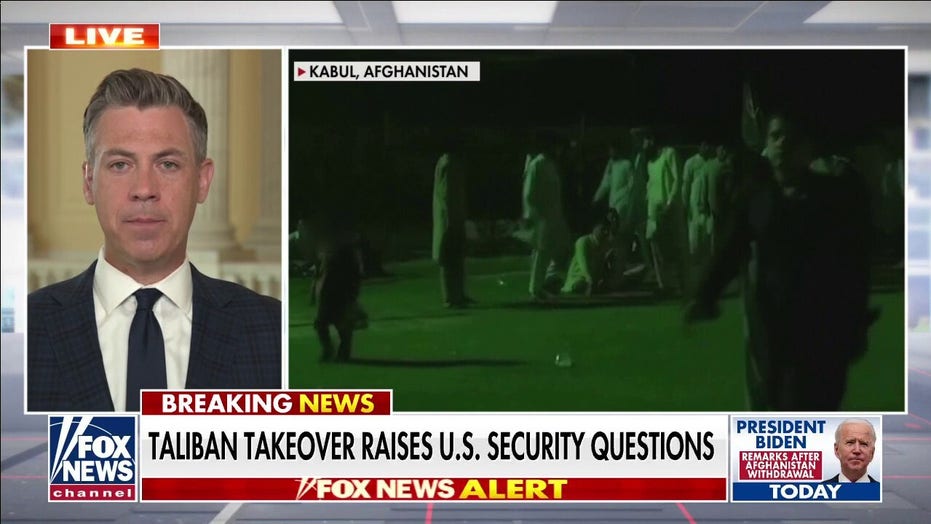 Rep. Banks: Biden admin ‘will continue their victory lap’ while Americans are still ‘trapped’ in Afghanistan

Rep. Jim Banks, R-Ind., on Thursday sent “a message” to House Speaker Nancy Pelosi and President Biden with a new poster outside his office.

The poster shows a photo of Biden that spread across social media and appeared on the cover of the New York Post earlier this week in which he seems to be checking his watch during a Sunday ceremony for the 13 U.S. service members killed in an ISIS-K suicide bombing near the Kabul airport in Afghanistan on Aug. 26.

“It’s time to bring every American home!” the poster from the Republican Senate Committee reads.

The president is facing pressure from lawmakers and U.S. citizens alike to help the likely hundreds of American citizens and Special Immigrant Visa (SIV) holders and their families estimated to still be trapped in Afghanistan return home after the last U.S. troops left the country on Monday.

White House press secretary Jen Psaki sidestepped a question by Fox News’ Jacqui Heinrich during a press briefing Tuesday about criticism of the president’s conduct during the dignified transfer ceremony for the fallen troops, asking specifically about the photo of Biden looking at his watch.

“I would say his message to all of the family members, who were there — those who were not even in attendance — is that he is grateful to their sons and daughters, the sacrifice that they made to the country,” Psaki said. “That he knows firsthand what it’s like to lose a child and the fact no one can tell you anything, or say anything, that there’s no words that are going to fill that hole that is left by that.”

Pentagon press secretary John F. Kirby said last week that while the military mission in Afghanistan is over, the United States will continue to get the U.S. citizens and Afghan allies left behind out of the country.

“We don’t believe the effort is concluded,” he said.