President Donald Trump on Monday reportedly used federal police to tear-gas Christian priests, along with hundreds of peaceful protesters gathered to demand an end to police brutality against Black Americans.

Clergy were passing out water and snacks to protesters in front of St. John’s Church, Lafayette Square, an Episcopal parish in Washington, D.C., before law enforcement officials in riot gear reportedly fired tear gas and flash-bangs to disperse the crowd so that Trump could walk to the church for a photo-op. Lafayette Square is a park that lies directly north of the White House.

Rev. Gini Gerbasi, rector of a different St. John’s Episcopal Church in the city, said she and seminarian Julia Joyce Domenick were tear-gassed and driven off of church property by police.

“I was coughing, her eyes were watering, and we were trying to help people as the police – in full riot gear – drove people toward us,” Gerbasi wrote in a Facebook post late Monday night.

The patio of the church had been “holy ground” and a place of rest for protesters, Gerbasi said, but Trump turned it into a “battle ground” and a “cheap political stunt.”

“I literally COULD NOT believe it,” she wrote. “PEOPLE WERE HURT SO THAT HE COULD POSE IN FRONT OF THE CHURCH WITH A BIBLE!”

U.S. Secret Service agents, Park Police and National Guardsmen participated in the clearing of Lafayette Square, according to The Associated Press. For “operational security reasons,” the Secret Service declined to answer HuffPost’s questions about how and why the clergy were cleared from church property. A National Guard Bureau spokesman also declined to answer specifics about the dispersal.

The U.S. Park Police did not respond to HuffPost’s request for comment on whether clergy were tear-gassed and driven from church property. 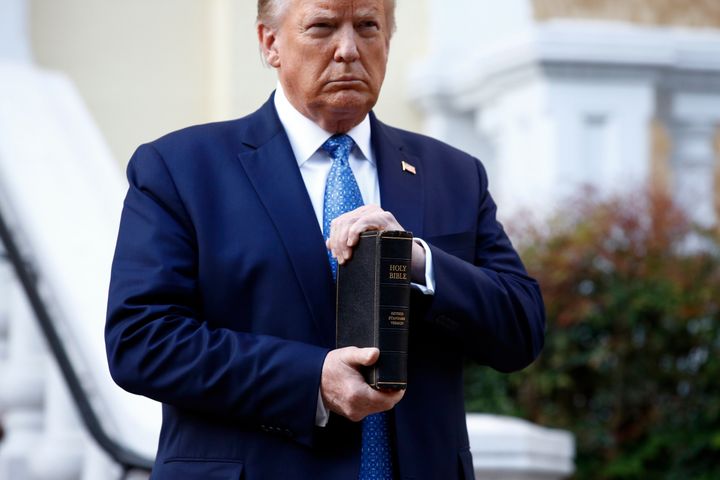 Domenick also wrote a Facebook post Monday night, in which she described how she was feeling: “Angry. Disbelief. Sick. In Pain.” She said she was at St. John’s Church with several friends from seminary, responding to a call from the Episcopal Diocese of Washington for people of faith to gather “in prayerful solidarity” with protesters.

The protest was peaceful until law enforcement officials rushed the crowd, according to Domenick.

“No warning…Screaming, flash grenades, and tear gas came at us. People ran as fast as they could around the corner of the church. Within minutes all of the church volunteers were met with a crowd running from the police and the police swarming the church property,” she wrote on Facebook.

“We were gassed for a photo op,” Domenick added. “Is ANY life valuable to him? Is it all about ratings?” 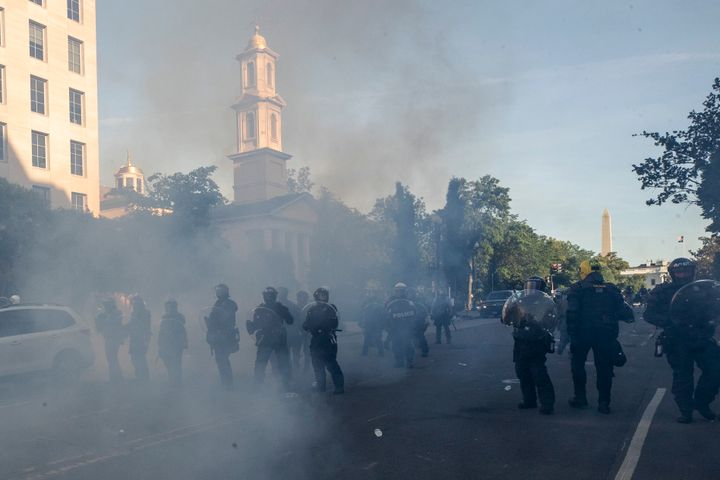 St. John’s Church is over 200 years old and has been nicknamed the “church of the presidents.” Every president since James Madison has attended at least one service there, according to the church’s website. The parish is part of the Episcopal Church, a progressive denomination that has often stood at odds with the president’s policies.

The basement of the church’s parish building was set on fire Sunday night during protests over the police killing of George Floyd, a Black man from Minneapolis who died last week after a white police officer knelt on his neck.

St. John’s Church responded to the damage to its building by pledging solidarity with the protesters. Rev. Mariann Budde, the Episcopal bishop of Washington, told HuffPost on Monday that clergy from her diocese gathered by the church to offer water, snacks and prayer to protesters.

“There’s a huge difference between loss of life at the hands of a police officer as part of a systemic pattern of racism, and being concerned about the basement of a church,” Budde said. “We’re trying to keep our focus on the major issues.”

Gerbasi told Religion News Service that at least 20 other clergy showed up at St. John’s Church on Monday to help with the diocese’s outreach efforts. She said she connected with the Black Lives Matter medical team, which was on hand with eyewash in case they faced tear gas.

Law enforcement began expelling people from the park before the 7 p.m. curfew imposed by D.C.’s mayor. At that point, Gerbasi wrote on Facebook, people started running toward the patio of St. John’s Church for medical supplies. Clergy and protesters were then “driven off” the patio by police.

“I was coughing with tear gas in my clergy collar, and my gray hair, and my old-lady reading glasses, so that that man could stand there and hold a Bible in his hand and look Christian,” Gerbasi told CBS affiliate WUSA9. “And it would be far more Christian if he would behave according to the words in that book instead of just carrying it around with him as a prop.” 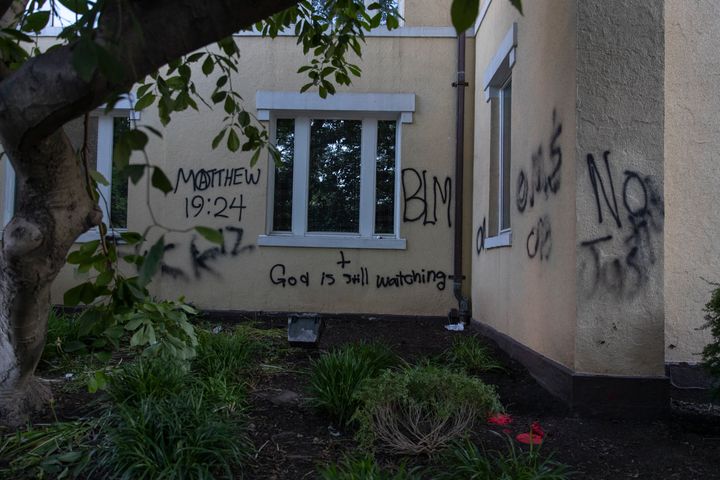 The White House declined to say if Trump believes the clergy’s removal from church property infringes on their religious rights.

“The perimeter was expanded to help enforce the 7 p.m. curfew in the same area where rioters attempted to burn down one of our nation’s most historic churches the night before,” White House deputy press secretary Judd Deere said in a statement to HuffPost. “Protesters were given three warnings by the U.S. Park Police.”

Budde said she had no idea that Trump planned to stage a photo-op outside a church in her diocese.

“I am going to do everything in my power to disassociate our church from what the president did tonight,” she said.

Rev. Michael Curry, the presiding bishop of the Episcopal Church nationwide, accused Trump of using a church building and the Bible for “partisan political purposes.” 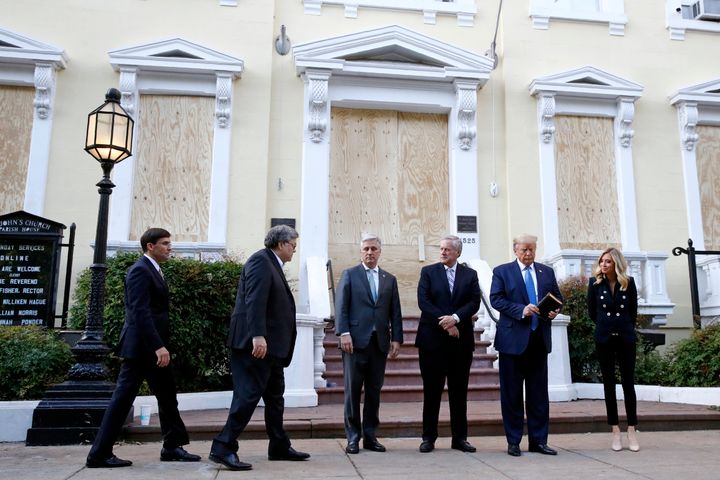 Andrew Whitehead, a sociologist at Clemson University, told HuffPost that the president’s actions align perfectly with the goals of Christian nationalism, a phenomenon that he studies. Christian nationalism hinges on the narrative that the United States has a special covenant with the Christian God. This increasingly prominent ideology is most commonly found amongst Trump’s white evangelical supporters.

“Trump was signaling to Americans who embrace Christian nationalism that he will forcibly protect them and their vision for the United States,” Whitehead said. “Trump’s use of religious symbolism symbolically baptized his authoritarian speech.”

Those who embrace Christian nationalism won’t be concerned that the church Trump stood in front of doesn’t support his actions, Whitehead said. If anything, he said, they likely view the clergy and parishioners of that church as outside the faith because they don’t support Trump.

“In order to explain away that the clergy were tear-gassed, my guess is that they will appeal to how we are supposed to submit to authorities,” Whitehead said. “They will say that those clergy should have cleared out on their own accord.”