President Donald Trump’s reelection campaign released an ad Thursday that falsely implies a former governor, Obama administration Cabinet member and U.S. ambassador to China is a Chinese government official — indirectly reinforcing an insidious pattern of Asian Americans being seen as “other” and being asked to prove they’re American.

The racist, xenophobic and nativist ad features a montage of presumptive Democratic presidential nominee Joe Biden meeting with Chinese government officials during his time as vice president, and attempts to suggest Biden “stands up for China.”

It briefly shows footage of Biden with Gary Locke, who at the time was the U.S. ambassador to China — falsely implying that Locke, a third-generation Chinese American, is a Chinese government official.

“The shot with the flags specifically places Biden in Beijing in 2013. It’s for a reason. That’s the Hunter Biden trip. Memory Lane for ol’ Joe,” Trump campaign spokesperson Tim Murtaugh tweeted in response to Atlantic reporter Edward-Isaac Dovere, who pointed out Locke’s inclusion in the ad. Murtaugh was referring to Biden’s son Hunter, who has faced scrutiny for business deals in China and Ukraine.

Locke, who was born and raised in Seattle, served two terms as the governor of Washington before going on to be a commerce secretary and U.S. ambassador under President Barack Obama.

Biden’s campaign said Friday that the ad was a “repugnant depiction of a great American, who Joe Biden is honored to have the support of.” 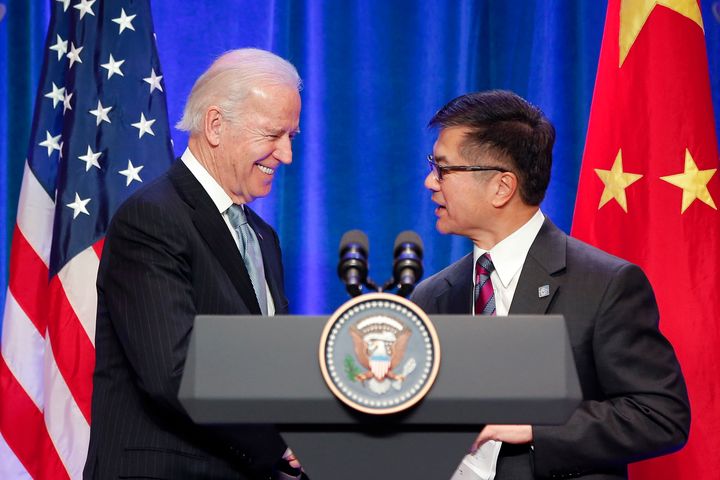 The ad, which accuses Biden of cozying up to China, frames the issue around the coronavirus pandemic. It shows Biden criticizing Trump’s decision to restrict travel from China, which the president’s allies have held up as an example of a swift response to the pandemic ― even though Trump downplayed the threat of the virus, gutted government agencies and teams that would have been vital to the response and used racist rhetoric to describe the global outbreak.

The implications of Locke’s inclusion in the ad and the false suggestion that he is a Chinese government official are all too familiar for Asian Americans, who often get mistaken for other Asian Americans and get lumped together. Others often dismiss this as simply an innocent mistake.

Moreover, it’s yet another illustration of the ways that Asian Americans have faced racist, xenophobic and nativist attacks throughout U.S. history ― like perpetually being seen as “other” and being asked to prove they’re American, even if their family has been in the U.S. for generations. The most infamous example: During World War II, Japanese Americans were accused of being spies for Japan, then rounded up and put into concentration camps.

“Asian Americans constantly fight the perception that we’re not real Americans and owe our loyalties to another country,” former Obama Cabinet secretary Chris Lu tweeted in response to the ad Thursday night. “Gary Locke was born in the U.S. and has served this country with distinction. By suggesting that Locke is a foreigner, Trump insults all non-white Americans.”

The ad comes at an unnerving time for Asian Americans, who have been the targets of increased racist harassment and hate crimes because of the COVID-19 outbreak.

Trump and his allies, including administration officials, GOP lawmakers and right-wing media hosts, have repeatedly referred to COVID-19 using racist rhetoric like the “Chinese virus” and “Wuhan virus,” drawing attention to the coronavirus’ origin even as it spread across the world. Asian Americans have faced racist stereotypes involving disease since at least the 19th century, including being described as “the yellow peril.”

Former 2020 Democratic presidential candidate Andrew Yang — who caused backlash last week when he wrote an op-ed asserting Asian Americans should combat racism by trying to “show our American-ness in ways we never have before” — also criticized the ad. He called it Trump’s attempt at “rewriting history as if he effectively responded to the virus,” and said it was “utter garbage.”

“Goddamn this shit is infuriating,” Yang tweeted. “Gary Locke is as American as the day is long.”

During his closing speech as U.S. ambassador to China in 2014, Locke addressed the dualities with which Asian Americans often grapple, describing himself as “thoroughly American.”