“Today I’m formally announcing an exploratory committee for the U.S. Senate,” Booker said Monday in a video and an accompanying release. “We will transform Kentucky, and Rand Paul, you know it, too.”

Paul, the libertarian-minded Republican senator and ally of former President Donald Trump who was endorsed by Trump last week, has said he’ll run next year for a third six-year term in the Senate.

Booker, once a longshot for the 2020 nomination against establishment favorite and eventual nominee Amy McGrath, saw his campaign surge last spring amid protests in Kentucky and nationwide over police brutality against minorities and systemic racism. 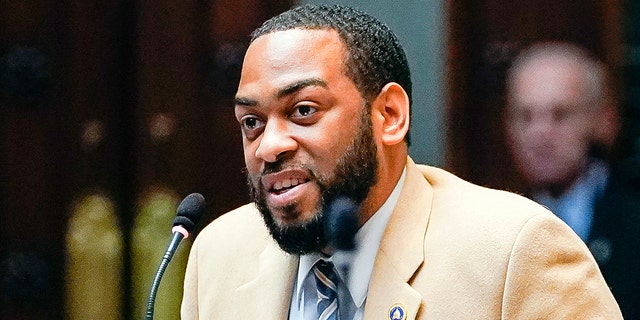 The demonstrations were sparked by the death of Black man George Floyd in Minnesota – as well as the death of Breonna Taylor, a 26-year-old Black emergency medical technician who was fatally shot in her apartment by police in Louisville, Booker’s hometown.

Booker referenced the fatal shooting of Taylor in Monday’s video, pledging to build a society “where we all rest easy without worrying about our front door being busted down.”

Booker also reprised his “hood to the holler” 2020 campaign theme, which highlighted what Black Kentuckians in urban areas and low-income Whites in the rural mountains of eastern Kentucky, which he termed the “people in forgotten places,” had in common.

Booker pledged in his video to strive for a world where “we come together united, from the hood to the holler, Black, White, Brown, to live in a Commonwealth where everyone can thrive.”

He also spotlighted that he would push to “adopt a Green New Deal for Kentucky” and “guarantee quality healthcare for every man, woman, and child.”

Booker’s forming of an exploratory committee – a step short of launching a campaign – allows him to fundraise, travel the state and much more as he tests the waters without having to formally declare his candidacy.

While Booker appears to be the early favorite in the Democratic nomination race, he would be a distinct underdog in the general election in a state that hasn’t elected a Democrat to the Sente in nearly three decades.

An eye surgeon who was first elected to the Senate in the Tea Party wave of 2010, Paul clashed with Trump during the 2016 Republican presidential primaries. Paul accused Trump of being a “fake conservative” and a “delusional narcissist and an orange-faced windbag.” Trump, in turn, insulted Paul as “a spoiled brat without a properly functioning brain” and mocked the senator’s appearance.

But Paul became one of Trump’s biggest backers, and last week landed an endorsement from the former president.

“Rand Paul has done a fantastic job for our Country, and for the incredible people of Kentucky,” Trump said in a statement. “He fights against the Swamp in Washington, the Radical Left Liberals, and especially the destructive RINOS, of which there are far too many, in Congress.”