A leading Australian corporate lawyer is set to be grilled in court alongside casino giants Crown and The Star over their alleged links to one of Australia’s biggest ponzi schemes.

The attempt by corporate investigators to force well-known lawyer and businessman John Landerer and representatives of Star and Crown to attend court examinations is the most serious escalation yet in the probe by liquidators into the spectacular $600 million collapse of the iProsperity property group. 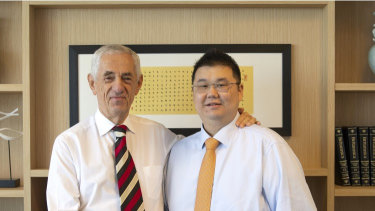 Star and Crown are likely to face questions about at least $54 million transferred by iProsperity’s founders, Michael Gu and Harry Huang, and their associates into casino accounts.

Landerer, whose own property firm recently hired former NSW deputy premier John Barilaro, is under scrutiny over millions of dollars in loans he and his businesses were claimed to have received from the iProsperity group at a time Landerer was advising it about some of its property ventures.

But Landerer, Star and Crown are not the only leading Australian business figures and firms now facing intense scrutiny from liquidators about their knowledge of, or involvement in, iProsperity transactions under investigation.

A major online bookmaker, CrownBet/BetEasy (now part of the SportsBet group) is another big corporate name dragged into the scandal, with investigators suggesting millions of dollars in stolen investment funds may have been wagered on sporting events. The group was contacted for comment.

The shift in focus by corporate investigators from iProsperity’s fugitive founders, businessmen Gu and Huang, to its business partners and facilitators comes as the NSW corruption commission simultaneously investigates if iProsperity bribed a Sydney mayor to win planning concessions.

According to one figure with deep knowledge of iProsperity’s operations, but who is not authorised to speak publicly, the story of the firm’s collapse points to how easily corporate crime can be committed in Australia.

“Gu and Huang came here, gamed the system, and left very wealthy men. ASIC and the tax office did very little to stop them.”

It wasn’t long after the spectacular $600 million collapse of the iProsperity property group that the forensic accountants tasked with tracing its missing funds began to uncover some odd transactions.

The two iProsperity bosses, Gu and Huang, were corporate nobodies when 26-year-old Gu announced himself in 2015 as one of Australia’s hottest developers, with access to a seemingly unlimited stream of funds from wealthy Chinese individuals. Gu, a former telco salesman, encouraged high-wealth Chinese nationals to back his companies in order to gain access to Australia’s “Significant Investor Visa” scheme (SIV), which previously offered visas for those willing to invest at least $5 million.

Untried and untested, Gu and Huang attracted capital by spruiking their involvement in major property developments and hotels. At one point, they claimed to be investing in a Novotel hotel and the Canberra Casino.

When iProsperity collapsed in 2021 amid revelations they had repeatedly lied to creditors as the company floundered, sustained by conning new investors to part with millions of dollars, media interest focused on how Gu and Huang had diverted company funds to buy luxury homes and expensive cars and even Vanuatu passports. For a Ponzi scheme scandal, this wasn’t unexpected.

“Gu and Huang came here, gamed the system, and left very wealthy men. ASIC and the tax office did very little to stop them.”

As for the passports, Huang and Gu were planning to flee Australia, as they successfully did in 2020.

What intrigued the asset hunters from corporate recovery firm Cor Cordis was the role of other and far better known corporate players in the demise of iProsperity.

One of the people that liquidators think could help them in their further investigations is Landerer, a wealthy and well-connected Sydney corporate lawyer and businessman who recently sold his Vaucluse house for $62 million.

The liquidators plan to call Landerer to public examinations to quiz him over his role at the group, including his knowledge of dealings by Gu and Huang and, most importantly, whether he was a shadow director of the group. 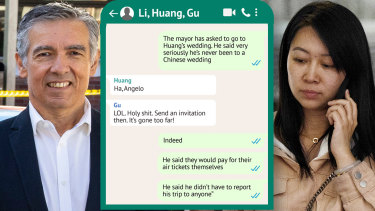 Liquidators believe that Landerer, who in February employed Barilaro as executive director of his company Coronation Property, provided legal advice to iProsperity and some of its associated entities and had involvement in the businesses – something Landerer has long denied.

If liquidators can prove Landerer was a shadow director of the group they might be able to argue that he should be held personally liable in the same way an official director of a company would be in a liquidation.

Contacted by The Age and the Herald this week, Landerer denied any involvement as a director of the iProsperity group of companies. “I was not a director or a shadow director. There is no evidence at all that I was,” Landerer said.

“I never signed anything as a director. I never attended any director meetings. It’s all bullshit.”

Landerer was also adamant that he was not a regular legal adviser to the duo or the iProsperity group. “I did not do a lot of work for them at all. That’s incorrect to say.”

But Cor Cordis isn’t convinced that Landerer doesn’t have more knowledge than he is letting on, according to its confidential report. The report details two personal loans between Landerer and iProsperity totalling $1.5 million. Liquidators also say iProsperity’s books and records also show Landerer’s private company Regina Equities received a $9 million loan from the company, the bulk of which has been repaid.

Liquidators allege Landerer received a $1 million loan from iProsperity that was never repaid. They have sent letters of demand to Landerer asking that he repay the debt that with interest now stands at $4.2 million. Landerer confirmed this week that a separate $500,000 loan issued by iProsperity to Landerer was repaid by the Sydney businessman in full.

“I was not a director or a shadow director. There is no evidence at all that I was… It’s all bullshit.”

The report shows that Landerer has told liquidators that he does not owe the money to iProsperity and instead owes money to another man, David Gong, who was a customer of the iProsperity Group.

“Mr Gu and Mr Gong made a deal so that the loans I had were transferred from iProsperity to Mr Gong. I’ve now got the liquidators and Mr Gong asking me to pay.

“I’m not going to pay twice, so they’ve got to figure it out. I don’t mind either way.”

The Cor Cordis report also reveals that the insolvency firm believes court examinations of employees of The Star Sydney casino and Crown Casino are needed to determine if either venue turned a blind eye to red flags that Gu and Huang were potentially betting with money stolen from iProsperity when they moved tens of millions of dollars into casino accounts. 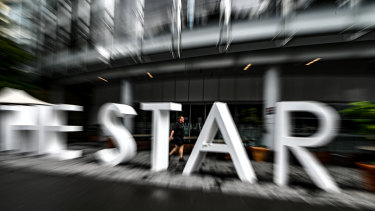 The issue of Star executives failing to properly inform the board is a key failure the inquiry has exposed.Credit:Flavio Brancaleone

The federal court liquidators’ examinations will also probe whether either casino ignored money laundering laws and procedures when they feted Gu and Huang as high rollers.

Star and Crown’s relationship with iProsperity has already come under sustained scrutiny, with The Age and the Herald reporting last year how both casinos may have ignored warning signs about the pair as they gambled huge amounts in high roller rooms.

The media reporting prompted scrutiny last month into the same issue, albeit limited to Star’s dealings with Gu, during public hearings ordered by the NSW gaming regulator into Star’s fitness to hold a gaming licence.

In its report, Cor Cordis reveals it has identified “in excess of $40 million” transferred into Crown Casino accounts by Huang between October 2016 and June 2020. At least a quarter of these funds are suspected to have been stolen from iProsperity.

Cor Cordis believes that over $14.5 million was moved into Star accounts by iProsperity’s founders and employees, including at least $10 million possibly misappropriated from iProsperity.

The Cor Cordis report says it wishes to grill Star and Crown staff to determine if “the casinos had the requisite level of knowledge that they were receiving iProsperity funds obtained in breach of directors’ duties for iProsperity to have a claim against the casinos.”

A spokesman for Star Entertainment Group declined to comment while the NSW inquiry into the casino group’s dealings with organised crime and money launderers is ongoing.

“The Bell Review is still in progress, it would be inappropriate to make any comment at this time.”

In a statement, Crown said that it wasn’t aware of any request for its staff to attend liquidation hearings. It also said: it had spent a year implementing “sweeping reforms to improve governance, compliance, responsible gaming and the management of financial crime risk.”