Americans want to get back to work: Scott Walker

Former Wisconsin Gov. Scott Walker, a Republican, argues reopening the economy in stages is a smart decision, as long as people continue to practice social distancing.

Get all the latest news on coronavirus and more delivered daily to your inbox.  Sign up here.

While many Americans are filled with fear, Melissa Ackison says the coronavirus pandemic has filled her with anger. The stay-at-home orders are government overreach, the conservative Ohio state Senate candidate says, and the labeling of some workers as “essential” is arbitrary.

“It enrages something inside of you,” said Ackison, who was among those who protested Republican Gov. Mike DeWine’s orders at the statehouse in Columbus with her 10-year-old son. She has “no fear whatsoever” of contracting the virus, she said Thursday, dismissing it as hype.

The Ohio protest was among a growing number staged outside governors' mansions and state Capitols across the country. In places like Oklahoma, Texas and Virginia, small-government groups, supporters of President Donald Trump, anti-vaccine advocates, gun rights backers and supporters of right-wing causes have united behind a deep suspicion of efforts to shut down daily life to slow the spread of the coronavirus.

As their frustration with life under lockdown grows, they’ve defied social distancing rules in an effort to put pressure on governors to ease them.

Some protests have been small, promoted via Facebook groups that popped up in recent days and whose organizers are sometimes difficult to identify. Others are backed by groups funded by Republican donors, some with ties to Trump.

The largest so far, a rally of thousands that jammed streets in Lansing, Michigan, on Wednesday, looked much like one of the president's rallies — complete with MAGA hats and Trump flags — or one of the tea party rallies from a decade ago.

The signs of frustration come as Trump has pushed for easing stay-at-home orders and tried to look ahead to restarting the economy. He unveiled a framework for governors to follow on Thursday, but acknowledged the governors will have final say on when their state is ready. Health experts warn that lifting restrictions too quickly could result in a surge of new cases of the virus.

But the president and some supporters are impatient. Thousands of people in their cars packed the streets of Lansing to protest Democratic Gov. Gretchen Whitmer’s stay-at-home restrictions. Outside the Capitol, some chanted “Lock her up,” a throwback to Trump’s calls during the 2016 election about his rival Hillary Clinton. 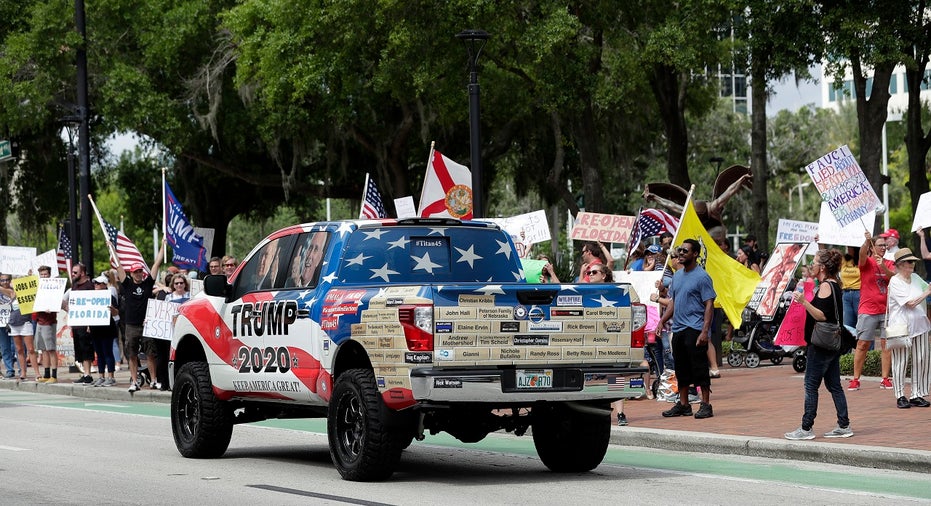 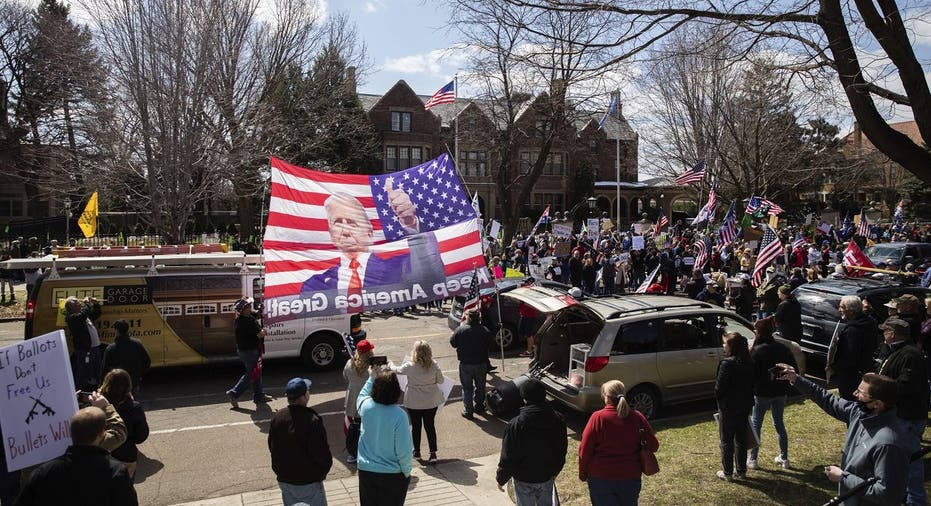 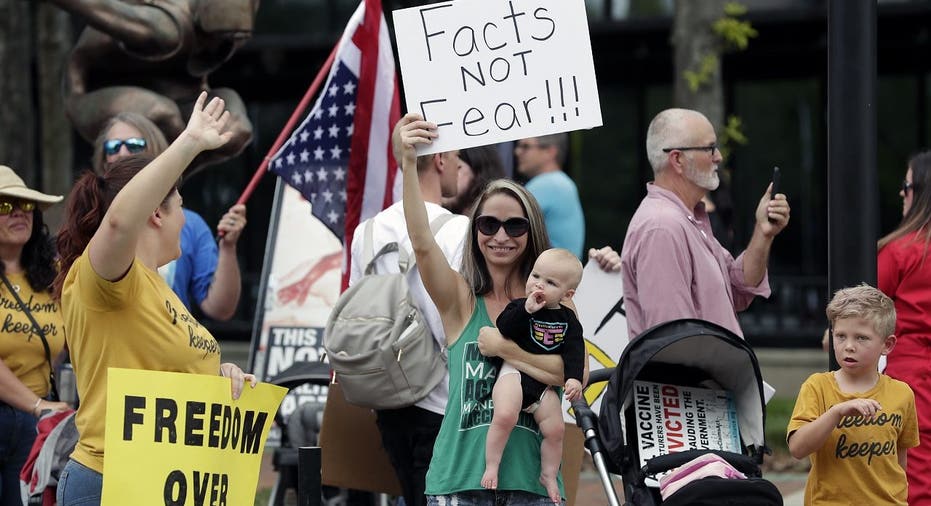 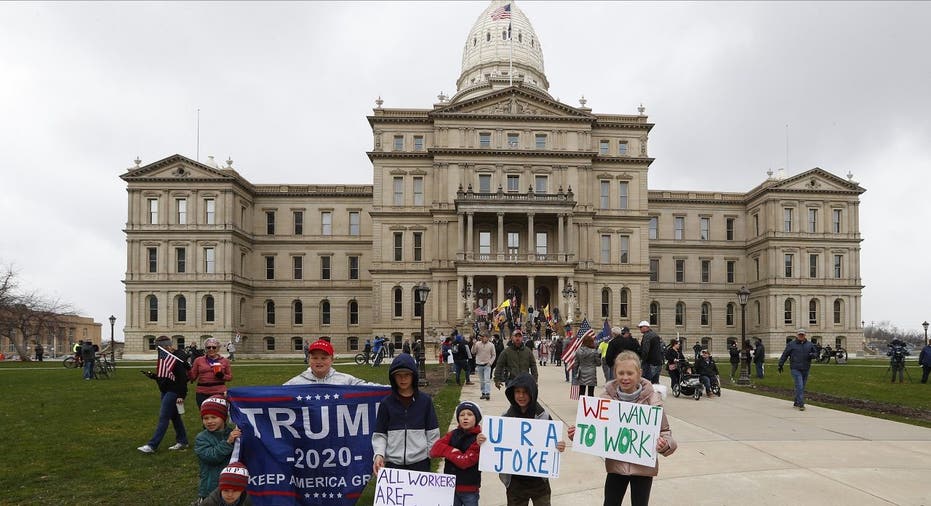 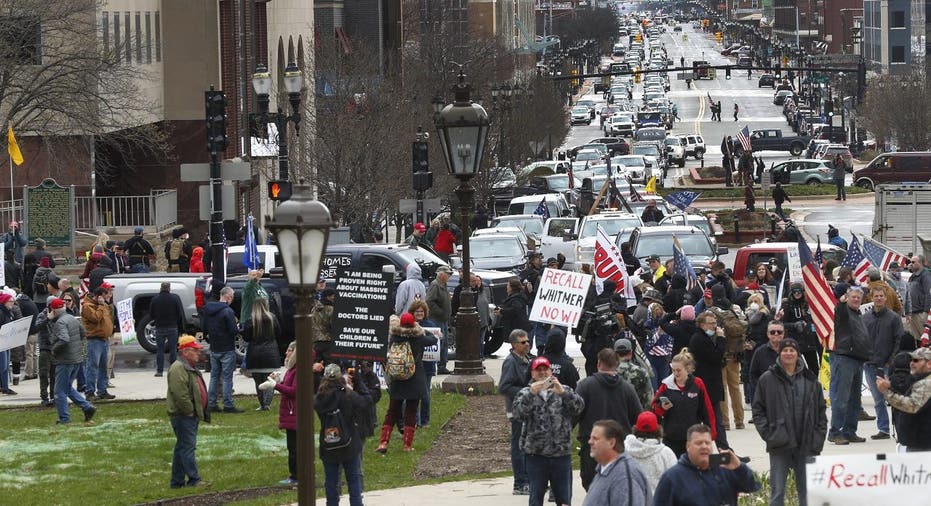 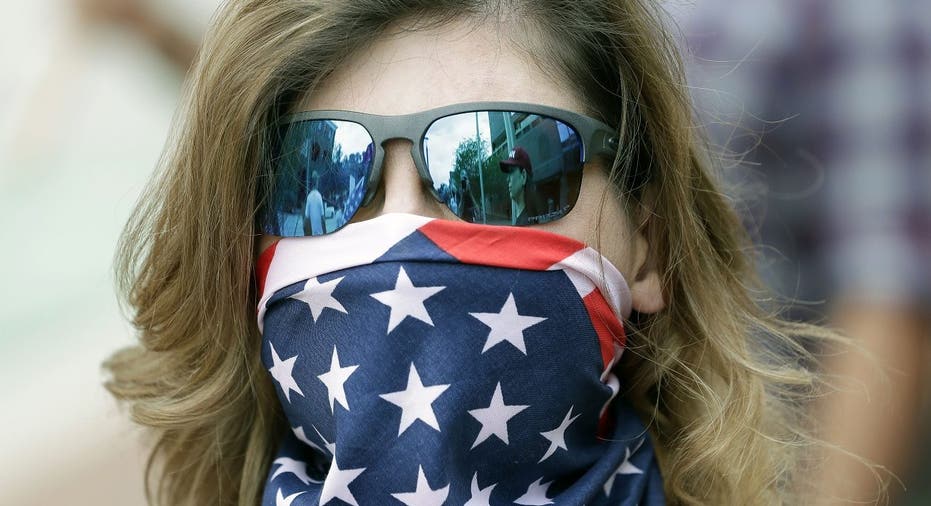 Asked about the protesters, Trump expressed sympathy with their frustration — “They’re suffering … they want to get back” — and dismissed concerns about health risks of ignoring state orders and potentially exposing themselves to the virus.

“I think they’re listening. I think they listen to me,” he said. “Nobody wants to stay shut.”

On Friday, he egged the protesters on, tweeting for supporters to “LIBERATE” three states with Democratic governors: Michigan, Virginia and Minnesota.

But the protests expose resilient partisan divisions, particularly in battleground Michigan. The protest there was organized by the Michigan Conservative Coalition, a group founded by a GOP state representative and his wife, Meshawn Maddock, who is on the advisory board for an official Trump campaign group called “Women for Trump" and is also the co-founder of Michigan Trump Republicans.

Another group promoting the event, the Michigan Freedom Fund, is run by Greg McNeilly, a longtime political adviser to the DeVos family, who are prolific Republican donors and have funded conservative causes for decades. McNeilly was campaign manager for Dick DeVos, the husband of current U.S. Education Secretary Betsy DeVos, during his failed 2006 bid for governor.

Whitmer was among the governors who expressed concern about the gatherings, saying it put people at risk and could prolong the shutdown. Michigan recorded over 2,000 deaths from COVID-19 as of Thursday, and close to 30,000 confirmed infections. Roughly one-quarter of the state’s workforce has filed for unemployment.

But it's not just Democratic governors feeling the heat. A procession of cars swarmed the Republican-dominated statehouse in Oklahoma City on Wednesday, with signs that said “stop killing our economy" and “time 2 work.”

Carol Hefner, an Oklahoma co-chair of Trump's 2016 campaign, helped organize the event. She characterized it as a "rally" — not a protest.

“We’re not New York. Their problems are not our problems,” Hefner said. “We are rallying around our governor and our state to encourage the opening up of our businesses.”

Other gatherings are linked to fringe groups. Protesters outside the Texas capitol in Austin on Thursday chanted “Free Texas” and “Make America Free Again” during an event broadcast live by InfoWars TV, part of a company owned by conspiracy theorist and radio host Alex Jones.

The Ohio event earlier this week brought together a collection of anti-vaccine advocates, Second Amendment supporters, tea party activists. A Columbus Dispatch photo of Ackison and others yelling through glass doors of the statehouse rocketed around the internet.

Ackison said that while she views DeWine’s efforts as constitutional overreach, she would be fine if Trump were to act with similar authority to force governors to bring states back online.

“We put President Trump in office for a reason," she said. "If he’s not able to give a convincing enough argument to these governors that they need to open up, then he needs to do something to take action.”

The protests were advertised on Facebook by groups like Reopen Virginia and End the Lockdown PA. A protest in Richmond, Virginia, on Thursday grew out of a conversation in the Facebook group Virginians for Medical Freedom, which often turns out at the capitol to oppose vaccine-related measures.

Kelly Mullin brought her sons to teach them a lesson about liberty. Mullin said she believes the risk posed by coronavirus depends on your health and that people can take basic steps to protect themselves, including getting enough sleep, eating organic produce and getting outside.

“I mean, that’s where our tax dollars should be going. Eat broccoli,” she said.

Infectious-disease specialists say there is no evidence that eating specific foods can prevent or kill the virus. Most people with coronavirus experience mild or moderate symptoms, and people with health issues such as asthma and older people are at greater risk of death from COVID-19.