A homegrown football hero and businessman supported by his longtime friend Donald Trump, Herschel Walker has an attractive profile for Republicans looking to reclaim a U.S. Senate seat in Georgia.

But as he decides whether to run, a more complex picture is taking shape. An Associated Press review of Walker’s statements over the years, along with a cache of public records, some including previously unreported details, reflects a pattern of turbulent and sometimes threatening behavior that could dog Walker’s Senate bid.

The documents detail accusations of threats Walker made on his ex-wife’s life, exaggerated claims about private-sector success and erratic behavior that disturbed his business allies. The account come on top of Walker’s previous disclosures about his history of struggling with mental illness.

That worries some Republicans in Washington and Georgia as they chart a path back to a Senate majority in the 2022 midterm elections. Their concern is that the 59-year-old political novice could win the GOP nomination with his fame and Trump’s help, but falter against Democratic Sen. Raphael Warnock. Georgia’s first Black senator, Warnock won a special election in January and will seek a full six-year term next year.

Walker “certainly could bring a lot of things to the table,” Georgia Gov. Brian Kemp, a Republican, said in a recent interview. “But as others have mentioned, there’s also a lot of questions out there.” 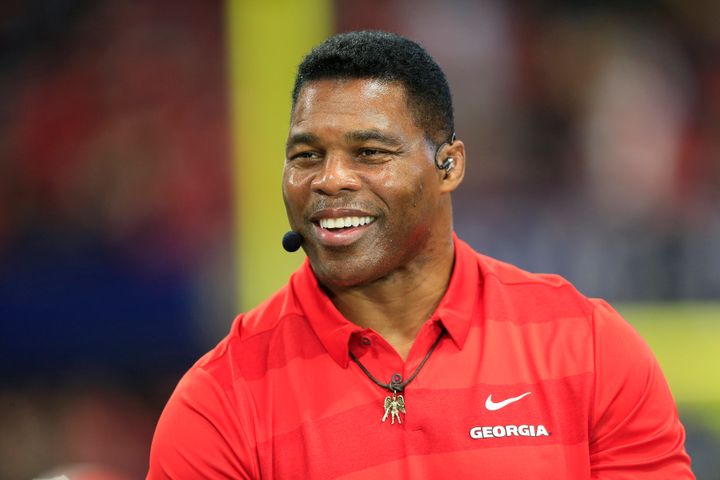 A native of tiny Wrightsville, between Atlanta and Savannah, Walker has yet to announce his intentions. He’s consulted with Georgia political players but has no visible operation in the state and resides in Texas. In a cryptic social media video last month, Walker revs the engine of a car and says, “I’m getting ready, and we can run with the big dogs,” before revealing a Georgia license plate.

The move amplified chatter about his potential candidacy but also drew a spotlight on his past.

Walker disclosed his mental illness in a 2008 book, “Breaking Free,” detailing a diagnosis of dissociative identity disorder. In that account, Walker told of as many as a dozen personalities — or “alters” — that he’d constructed as a defense mechanism against the bullying he suffered as a stuttering, overweight child.

The National Alliance on Mental Illness describes the disorder as “alternating between multiple identities,” leaving a person with “gaps in memory of every day events.” It notes men with the disorder often “exhibit more violent behavior rather than amnesia.”

In his book, Walker acknowledged violent urges. He wrote that he played Russian roulette, and recalled sitting at his kitchen table in 1991 pointing a gun, loaded with a single bullet, at his head. “I wasn’t suicidal,” Walker explained, but “just looked at mortality as the ultimate challenge.”

Walker pitched a turnaround story, saying he decided in 2001 that “it was time to stop running and face some harsh realities.” He cited therapy and his Christian faith as influences.

His watershed moment: driving his car to confront a man who’d “messed up my schedule” and thinking about what it’d be like to shoot the man. Walker changed course, he wrote, after seeing a bumper sticker with the message “SMILE. JESUS LOVES YOU.”

Yet Walker’s violent behavior continued well after the 2001 revelation and his efforts to get help, according to court records obtained by the AP.

Walker’s ex-wife, Cindy Grossman, noted his outbursts in their divorce proceedings, telling of “physically abusive and threatening behavior.” In 2005, four years after she’d sued for divorce, Grossman returned to the court for a protective order after Walker repeatedly voiced a desire and an intent to kill her and her boyfriend.

According to a previously unreported affidavit from Grossman’s sister, Maria Tsettos, Walker called looking for his ex-wife while she was out with her new boyfriend. Tsettos took the call and said Walker became “very threatening” when told of Grossman’s whereabouts. In Tsettos’ recollection, Walker “stated unequivocally that he was going to shoot my sister Cindy and her boyfriend in the head.”

Walker contacted Tsettos another time and repeated the threats in graphic terms, and, according to Grossman’s account to the court, Walker confronted her in public later that day: He “slowly drove by in his vehicle, pointed his finger at (her) and traced (her) with his finger as he drove.”

In granting a protective order against Walker, a Texas judge stripped Walker’s rights to possess a firearm for a time.

Walker, contacted through his sister as well as his longtime attorney, did not respond to AP inquiries. Grossman and Tsettos also did not reply to requests for comment.

Concerns about Walker’s behavior carried into his chicken business, now known as Renaissance Man Food Services, according to court filings.

In a recent court case, Walker indicated the company averaged about $1.5 million in yearly profit from 2008 to 2017. Meanwhile, Walker’s business associates testified in the same case that he doesn’t own chicken processing plants, as he claims. Instead, they described him as a licensing partner who lends his name to the enterprise.

Records generated in a 2018 wrongful termination suit — the employee ultimately lost — depict Walker as a temperamental and unreliable partner.

Walker persistently complained that his business partners were trying to cheat him out of money, the documents say. And they indicate he repeatedly fought with his associates over his focus on branching into frozen waffles, which he believed would be a future moneymaker for the company.

In a deposition, Walker dismissed his former employee as a “puppy.”