President Biden delivered an address to a joint session of Congress on Wednesday night, giving his most high-profile speech to the nation yet on the eve of his 100th day in office. 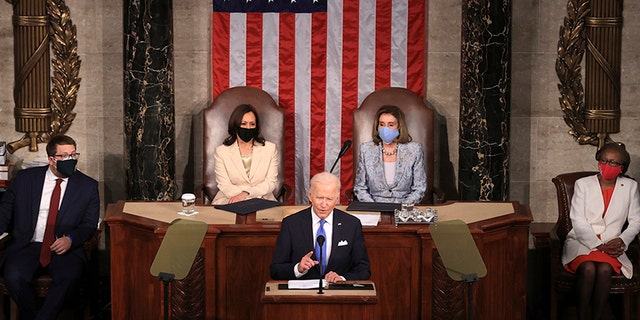 President Joe Biden addresses a joint session of Congress, Wednesday, April 28, 2021, in the House Chamber at the U.S. Capitol in Washington, as Vice President Kamala Harris, left, and House Speaker Nancy Pelosi of Calif., look on. (Chip Somodevilla/Pool via AP)

Here are the top five moments from Biden’s address to a joint session of Congress Wednesday night.

Biden’s walk to the front of the House chamber was eerie.

Normally at addresses like this, presidents are mobbed by dozens of lawmakers seeking just a couple seconds of air time on national television. Presidents shake hands, dole out slaps on the shoulder and smile as they take usually multiple minutes to make it up the aisle.

Biden Wednesday, however, was not visibly smiling — he was wearing a mask as he walked into the chamber despite that he is vaccinated.

Biden dealt fist bumps to a handful of lawmakers, including Republicans. He got a pat on the back from Sen. Patrick Leahy, D-Vt., and elbow bumped with Senate Majority Leader Chuck Schumer, D-N.Y. But there were more open seats in the chamber than lawmakers.

And with just those few short detours, Biden was at the front of the chamber in just a few seconds.

The volume of the applause was also jarring. It sounded more like a subdued golf clap than the typical raucous cheering which resembles the atmosphere of a college football game.

“Good to be back,” Biden said after he was announced by House Speaker Nancy Pelosi, D-Calif. Biden attended several joint speeches and State of the Union addresses when he was the vice president to Barack Obama.

Biden’s remark resembled a similar one from former President George W. Bush in his 2007 State of the Union, just after Pelosi was first elected speaker.

“Tonight, I have a high privilege and distinct honor of my own — as the first President to begin the State of the Union message with these words: Madam Speaker,” Bush said to a standing ovation.

A dose of hope

Biden touted the rapidly increasing percentage of Americans who are getting vaccines, saying that almost 70% of seniors are fully vaccinated and that all Americans are eligible for vaccines.

The president recounted a discussion he had with a nurse who delivers vaccines.

“A mass vaccination center in Glendale, Arizona, I asked the nurse, I said, ‘What’s it like?” Biden said. “She looked at me she said, ‘It’s like every shot is like giving a dose of hope.'”

Biden told a separate story about a letter he got from a mother who, “just cried, cried out of joy,” after getting her vaccine because she has a child with an autoimmune disease and was worried about bringing the virus home.

Biden got ovations from both sides of the aisle on multiple occasions Wednesday night. But in other moments the partisan divide in the chamber was clear.

The rest of the world is not waiting for us. I just want to be clear, from my perspective, doing nothing is not an option.

Senate Minority Leader Mitch McConnell, R-Ky., remained in his seat and did not clap as Democrats applauded Biden while he touted the passage of his coronavirus stimulus. Republicans only sparsely stood after Biden delivered a line on cutting child poverty in half via the stimulus, called the “American Rescue Plan.”

Biden was also greeted by a smattering of boos when he mentioned raising the minimum wage to $15. He got a rather icy response from Republicans when he pushed for bipartisan negotiations on his “American Jobs Plan,” a spending plan the White House is selling as an infrastructure effort.

“I’d like to meet with those who have ideas that are different, they think are better. I welcome those ideas,” Biden said. “But the rest of the world is not waiting for us. I just want to be clear, from my perspective, doing nothing is not an option.”

In response to that line, only a couple of Republicans stood. Very few applauded.

Biden also took on the polarizing issue of gun reform, calling out the National Rifle Association (NRA), a group most Republicans have a favorable opinion of, by name. He also panned the idea that people need magazines that can hold more than a handful of bullets.

“What do you think, deer are wearing Kevlar vests?” Biden said to a handful of laughs.

“After 20 years of valiant valor and sacrifice, it’s time to bring those troops home,” Biden said of the American troop presence in Afghanistan.

The response to that line was not the most vigorous of the evening. But members on both sides of the aisle clapped.

In that moment, Biden was declaring before Congress that he plans to end a war that has dragged on for nearly 20 years, sending multiple generations of American soldiers overseas.

Biden has committed to getting all American troops out of the country by September 11.

Somebody’s cell phone went off during Biden’s address at approximately 9:43 p.m. It was audible on the television broadcast.