Qantas is facing renewed pressure over its approach to industrial relations with the pilots union accusing the airline of “strong-arm” tactics in their latest negotiations.

The grievances were aired on the ABC’s Four Corners program on Monday night as the airline begins to stabilise after a period marred by staff shortages, flight delays and lost baggage, which have left many passengers and aviation unions dissatisfied with chief Alan Joyce’s performance. 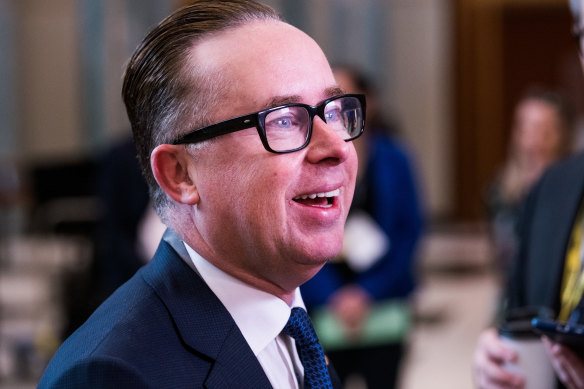 Qantas chief Alan Joyce at the jobs and skills summit in September.Credit:James Brickwood

The Australian and International Pilots Association accused Joyce and the carrier of threatening outsourcing to secure a recent short-haul enterprise agreement with the pilots to fly the new Airbus aircraft.

The association’s president, Tony Lucas, said the airline’s job security threats were a “poor way” to conduct negotiations and urged Qantas to consider a staff-inclusive industrial strategy that would improve engagement for the betterment of the business.

“Unfortunately, this is the tactic Mr Joyce and his team continue to use, not just with our association but with many other unions representing Qantas staff.”

Qantas denies it ever considered outsourcing short-haul flying if the pilots association voted down the agreement and said it communicated this to the pilots.

“To be clear, we never said a no vote would mean this flying would be outsourced. Had either pilot group not been able to provide us with the working arrangements needed to get a return on our investment, another entity within the Qantas Group that was able to do this would have done the flying,” a spokesperson said when the issue first arose in June.

Lucas said he hoped the airline would amend its approach to industrial relations ahead of negotiations with its domestic pilots due to commence in the coming months.

Joyce was famously blasted by its customers and the unions for grounding its entire fleet for 72 hours during an industrial dispute with its pilots, ground staff and engineers in 2011. Since then, Joyce’s relationship with many unions has been tense.

Despite mounting calls for Joyce’s resignation, this sentiment is not echoed by some shareholders who have argued Joyce should continue to steer the airline through the pandemic and welcomed the carrier’s $400 million buyback announced in last month.

Wilson Asset Management’s portfolio manager, John Ayoub, said the calls for Joyce’s head have been magnified unjustly: “It’s a case of a squeaky wheel getting oil.”

Wilson Asset Management owns a 0.4 per cent stake in the carrier.

“The issues the aviation industry is experiencing are global and aren’t fixed by getting rid of Joyce. A lot of its global competitors are quasi-government bodies, so I think if you compare Qantas to other listed airlines, he’s doing very well,” Ayoub said.

“This is the most difficult period for aviation and the way Qantas has come out is testament to Alan and his team.”

Joyce’s aggressive cost-cutting program at the start of the COVID-19 pandemic – which included axing 9400 jobs – has been blamed for Qantas’s poor performance. He’s been under pressure from the head of the Transport Workers Union, Michael Kaine, to resign but dismissed the call in August while delivering the company’s 2022 financial results.

“I think I’ve had more rapid resignation requests that any other chief executive or public figure out there. It’s not unusual, it’s part of the job,” Joyce said.

“The board asked me to continue in this job to get through this crisis. We will get through the current problems… and I think at the other end of this, Qantas will be stronger than it was before it went in.”