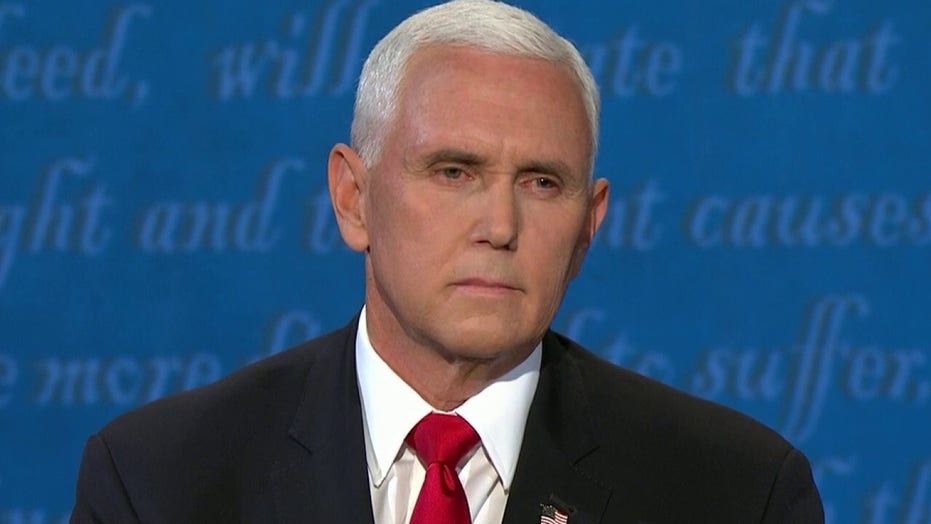 A vice-presidential debate in which the two candidates were divided by plexiglass began, fittingly, with the coronavirus.

“The greatest failure of any presidential administration in the history of our country,” Kamala Harris said.

The Democratic plan “looks a little bit like plagiarism,” and that’s something Joe Biden knows about, said Mike Pence.

Harris said the administration “covered it up,” and falsely said that President Trump had called the virus a hoax. The vice president said, without evidence, that tens of millions of doses of vaccines would be on the way before year’s end.

When Pence tried to interrupt Harris, the California senator said, “Mr. Vice President, I’m speaking,” and was able to continue. That and their softer tone signaled a more respectful debate than the Trump-Biden slugfest in Cleveland.

Their voices were calm and measured, even when they were using strong rhetoric, and they rarely looked at each other. Pence even congratulated his opponent on the “historic nature” of her nomination.

If Trump and Biden staged a cable shoutfest, the conversation between Pence and Harris at times resembled a PBS forum (except that Harris sometimes shook her head as Pence spoke). But Page had trouble getting Pence to stop running past the time limits as the night wore on, and failed to demand that either candidate answer questions they chose to ignore.

The debate was essentially a draw, with both candidates hitting their talking points aimed at the top of the ticket. That would translate into a slight edge to Harris, a freshman senator and national newcomer up against an incumbent vice president and former governor.

Harris avoided a pitfall that caused a previous stumble when moderator Susan Page of USA Today asked if she would take the vaccine. Harris said she would if doctors recommend it but not on Trump’s recommendation. Pence, ignoring the next question, said that for her to “continue to undermine confidence” in a vaccine was “unconscionable.” With that hard shot, and words about the Obama administration’s handling of swine flu, Pence was on offense for the first time.

Harris also ignored the next question to recite her record as the first female district attorney in San Francisco and the first woman of color to be California attorney general.

As the night wore on, Harris threw more first punches at Trump, noting he’d paid only $750 in federal income taxes in his first year in office. Pence, often counterpunching, said the president had been a businessman who paid “tens of millions of dollars” in taxes.

Pence won a round when Harris spoke of her running mate repealing the Trump tax cut on day one. That allowed the veep to declare that “Joe Biden’s going to raise your taxes,” throwing in the Green New Deal that Harris backed during the primaries but Biden opposed. The senator had to repeat Biden’s pledge not to boost taxes on anyone earning less than $400,000, which she should have mentioned at the outset.

SUBSCRIBE TO HOWIE'S MEDIA BUZZMETER PODCAST, A RIFF OF THE DAY'S HOTTEST STORIES

But Harris won the next round by saying Biden had helped pass ObamaCare, which the administration is challenging before the Supreme Court. “If you have a preexisting condition,” she said, ticking off cancer, diabetes and heart disease, “they’re coming for you.” Pence was left to call the law a “disaster,” say Trump has an undisclosed plan and would “protect preexisting conditions,” a key element of the Obama law.

The two traded jabs on foreign policy, but things heated up when Harris, citing reports by the Atlantic and others, said Trump had asked of fallen soldiers, “What’s it in for them?” Pence, in perhaps his most emotional moment–and the one time he battled Page over time limits–said his son is a Marine Corps captain and the president “reveres” soldiers.

In the one instance he posed a question directly to Harris, Pence won a late exchange by asking: “Are you and Joe Biden going to pack the court?” Harris reached back to Abraham Lincoln in 1864 in arguing that Amy Coney Barrett should not be confirmed, but never answered the question, which allowed the vice president to declare that they would add seats to the high court. Biden and Harris need to figure out an answer to this legitimate question.

At the same time, Pence plainly ducked a question on abortion when asked what Indiana should do if Roe v. Wade is overturned.

There may have been heightened interest in this debate because one running mate has the coronavirus and the other is 77, but the runup to the Salt Lake City faceoff lacked the excitement that has surrounded the Trump-Covid drama. Based on advanced media coverage, there was more interest in the performance of Harris as a fresh face and racial trailblazer than in the steady but familiar arguments to be mounted by Pence.

The VP debate probably didn’t move the needle for their respective tickets, but for Harris, roughly holding her own means she did nothing to undermine the former rival who picked her.