MANCHESTER, N.H. ― Former Vice President Mike Pence acknowledged Thursday for the first time his break from his ex-boss over the Jan. 6 insurrection, but he still did not blame Donald Trump for inciting the violent attack that nearly got him killed.

“As I said that day, Jan. 6 was a dark day in the history of the United States Capitol,” Pence told about 360 Republicans gathered for the Hillsborough County Lincoln-Reagan Dinner. “You know, President Trump and I have spoken many times since we left office, and I don’t know if we’ll ever see eye to eye about that day. But I will always be proud of what we accomplished for the American people over the last four years.”

Pence got a standing ovation for that declaration, and he went on to urge Republicans to not let what happened divide the party.

The remarks were his most detailed public discussion of Trump’s attempt to overthrow American democracy and remain in power despite losing the 2020 election by 7 million votes. Pence was the linchpin of Trump’s last-ditch scheme, and the former president had demanded that Pence reject vote tallies from a half dozen states, which would have left Trump with a higher total in the Electoral College so that he could claim victory.

Neither the Constitution nor the Electoral Count Act gives the vice president any such authority, and Pence repeatedly told Trump so over a period of weeks. The final such conversation came late on the morning of Jan. 6, just before Pence took the dais in the House to ratify the election results.

Notwithstanding this, Trump told thousands of followers he’d assembled at a rally near the White House that he hoped Pence would do as he asked ― and two hours later lashed out at his vice president for refusing to do so. “Mike Pence didn’t have the courage to do what should have been done to protect our Country and our Constitution,” Trump wrote at 2:24 p.m., as hundreds of his supporters were breaching police lines and storming into the U.S. Capitol. Many of them reacted to Trump’s tweet with chants of “Hang Mike Pence” as they roamed the building searching for him while Secret Service agents worked to evacuate the vice president to safety.

“Thanks to swift action by Capitol Police and federal law enforcement, the violence was quelled, the Capitol was secured and that same day we reconvened the Congress, and did our duty under the Constitution and the laws of the United States,” Pence said Thursday. 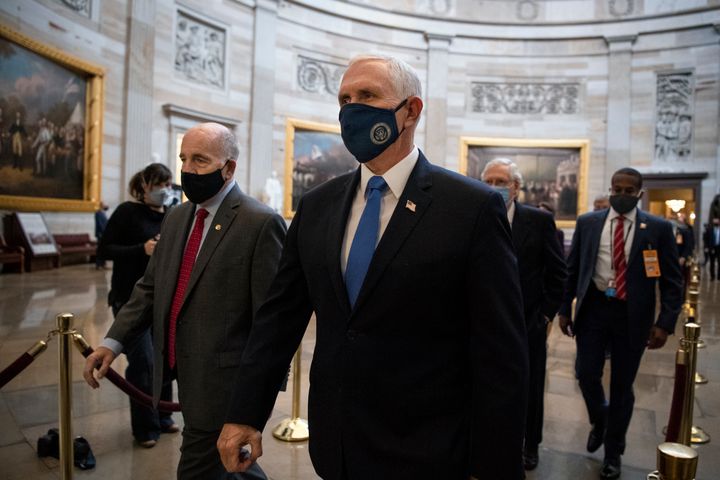 He did not, however, detail what Trump had asked him do. Nor did he get into the weeks of Trump’s repeated lies that the November election was “stolen” from him, a narrative that laid the groundwork for the insurrection.

Rather, Pence repeatedly praised Trump and his leadership starting 4½ minutes into his 37-minute speech and at one point even compared him to Ronald Reagan: “He said, ‘People say I’m a great communicator. Well, I’m not a great communicator, I just communicate great things.’ President Donald Trump did the same.”

In his only previous public remarks on the topic, at a speech to Christian conservatives in South Carolina on April 29, Pence described Jan. 6 as a “tragedy at our nation’s Capitol” and lumped it in with the pandemic, “civil unrest” and a “divisive election” as difficulties the country had faced in the past year.

He repeated that line Thursday, in his first visit to the first-in-the-nation presidential primary state since leaving office, but as a preface to his new statements.

Pence earlier in the day met with New Hampshire Gov. Chris Sununu and state Senate Republicans after meeting with potential donors in Boston upon arriving in New England. According to the county party, which includes the state’s biggest city, attendance at the dinner far exceeded the previous high of 220, and it grossed about $75,000.

How Pence’s new approach will play with a primary voting base that remains enamored with Trump is unclear as he prepares for a potential 2024 run for the GOP presidential nomination himself.

“There’s a lot of negative feelings out there about that,” said Paul Somero, a state House member from a rural part of Hillsborough County, repeating a falsehood commonly believed by many Trump supporters that Pence had the authority on Jan. 6 to give Trump a second term. “I learned after he didn’t do it that he could have done it.”

But Alex Talcott, a real estate lawyer from nearby Durham, said that Pence’s action that day does not turn off Trump supporters. “I think that tonight’s turnout proves that it does not. He’s actually respected by both wings of the party ― the Trump wing and the non-Trump wing.”

Trump was impeached a record second time just one week after Jan. 6 for inciting the attack on the U.S. Capitol, although Senate Republicans chose not to convict him ― an action that would have prevented Trump from running for federal office again, which Trump has said he is considering.

Senate Minority Leader Mitch McConnell (R-Ky.) and most other congressional Republicans last week blocked the creation of a bipartisan Jan. 6 commission to investigate the assault.