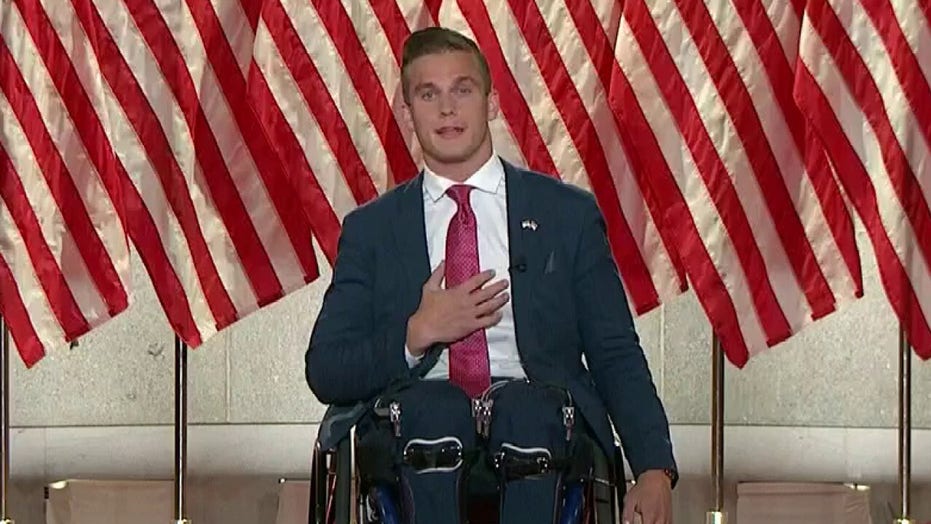 Madison Cawthorn urges Americans to be a radical for freedom, liberty and for our republic

Cawthorn, who was partially paralyzed in a 2014 car accident and uses a wheelchair, closed his speech by urging Americans not to "cower to a mob," and to "kneel before God but stand for our flag.

Alcindor, who is also a contributor to NBC News and MSNBC, responded by tweeting: "Madison Cawthorn made it a point to stand, suggesting that all Americans to should stand during the pledge of allegiance & national anthem. It was a direct rebuke of actions by ppl — including black [sic] athletes who are currently sitting out games — protesting police brutality."

"How on earth could you possibly turn the rather moving act of a FREAKIN' PARAPLEGIC rising for the national anthem into some weird BLM trip?" Attorney and National Review contributor Jeff Blehar tweeted. "When someone holds the door open for you, is that a rebuke of BLM too? My patience for takes like this has reached its limit."

"The activist below found a way to turn a paraplegic standing up in his wheelchair an act of white supremacy," Daily Caller reporter Chuck Ross tweeted.

"Nowhere did Cawthorn state his standing was a “direct rebuke of actions by ppl — including black athletes who are currently sitting out games — protesting police brutality. And Yamiche Alcindor is not a journalist," conservative commentator Stephen Miller said.

"If you thought, 'certainly nobody could attack this man in a wheelchair for standing up at the end of his speech,' you haven't met our completely insane White House press corps, currently viciously attacking a paralyzed man for not sharing their far-left political views," The Federalist senior editor and Fox News contributor Mollie Hemingway tweeted.

Earlier this summer, Alcindor was criticized for attempting to refute President Trump's claim that protesters who had been destroying statues have no knowledge about the statues they're destroying.

"Protesters say they understand who the statues commemorate," she wrote, "and that images of those people–many who owed enslaved people–should be gone."