The parents of the former U.S. Marine jailed in Russia are calling for his release ahead of the Geneva summit where leaders Vladimir Putin and President Joe Biden will be meeting on Wednesday.

Trevor Reed, 29, has been placed in a Russian prison for nearly two years. The couple are hoping that Biden and Putin come to an agreement at the Geneva summit on Wednesday to have Reed released.

Joey and Paula Reed received a letter from their son, Trevor Reed, dated June 7 that he had contracted the coronavirus in Russia’s prison cell.

The letter, written in Russian and translated by Reed’s longtime girlfriend Lina Tsybulnik to his family, said he had chest pain and intermittent coughing.

According to Joey Reed, Trevor was complaining that he was sick in messages to his parents during the month of May. 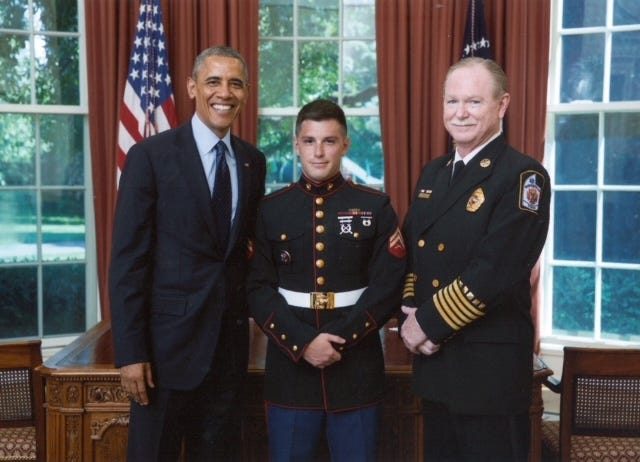 Trevor Reed was a former U.S. Marine who served at Camp David under the Obama Administration. (Photo: Joey and Paula Reed)

Geneva summit: With US-Russia relations at low point, Biden, Putin each bring a wariness to meeting

As of right now, Reed is isolating but receiving no medications. This is just one of the hardships he is facing in the SIZO-5 detention center. 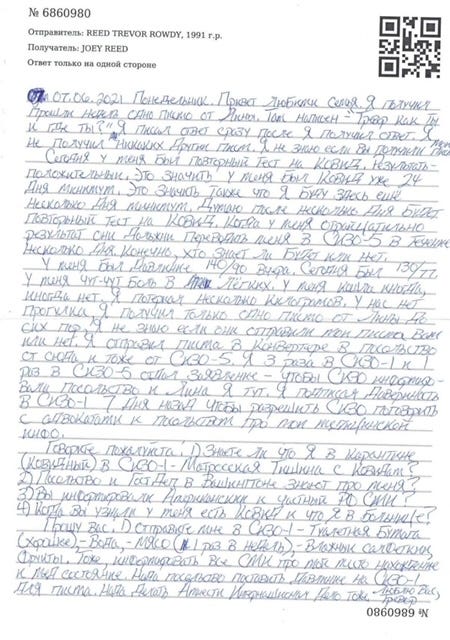 A letter sent by Trevor Reed to his family written in Russian. It is dated June 7. (Photo: Joey and Paula Reed)

Trevor Reed was convicted in the Golivinsky District Court in Moscow on July 30, 2020, according to a background memo received from media consultant Jonathan Franks. He was attending a birthday party in 2019 with Tsybulnik when he became intoxicated.

On their way home the next morning, Reed became nauseated and got out of the car on a busy street. After the police arrived, they told Tsybulnik that they would take Reed to the police station to figure out what to do with him. She followed the police car to the station, and the police said she could come back around 9 a.m. after he sobered up.

According to the police, Reed had grabbed the arm of a police officer driving the vehicle to the station and swerved the car to enter the oncoming lane. He was charged with assault, but over the course of the trial, video evidence shows that police car never swerved, according to Joey Reed.

“Our lawyers had government experts analyze the video and put out a big long report saying that the car never slowed down and never stopped. It never swerved and never did anything abnormal,” Joey Reed said.

He had appealed to the Moscow City Court.

From Eagle Scouts to the Marines

Joey and Paula Reed describe Trevor to be “honest” and “always wanting to tell the truth.”

“We would leave our children with their grandparents, and first thing in the morning, he would tell us ‘Mom, Dad, grandma gave me ice cream before we went to bed last night,” Paula Reed recalls laughing. “He was always very honest.” 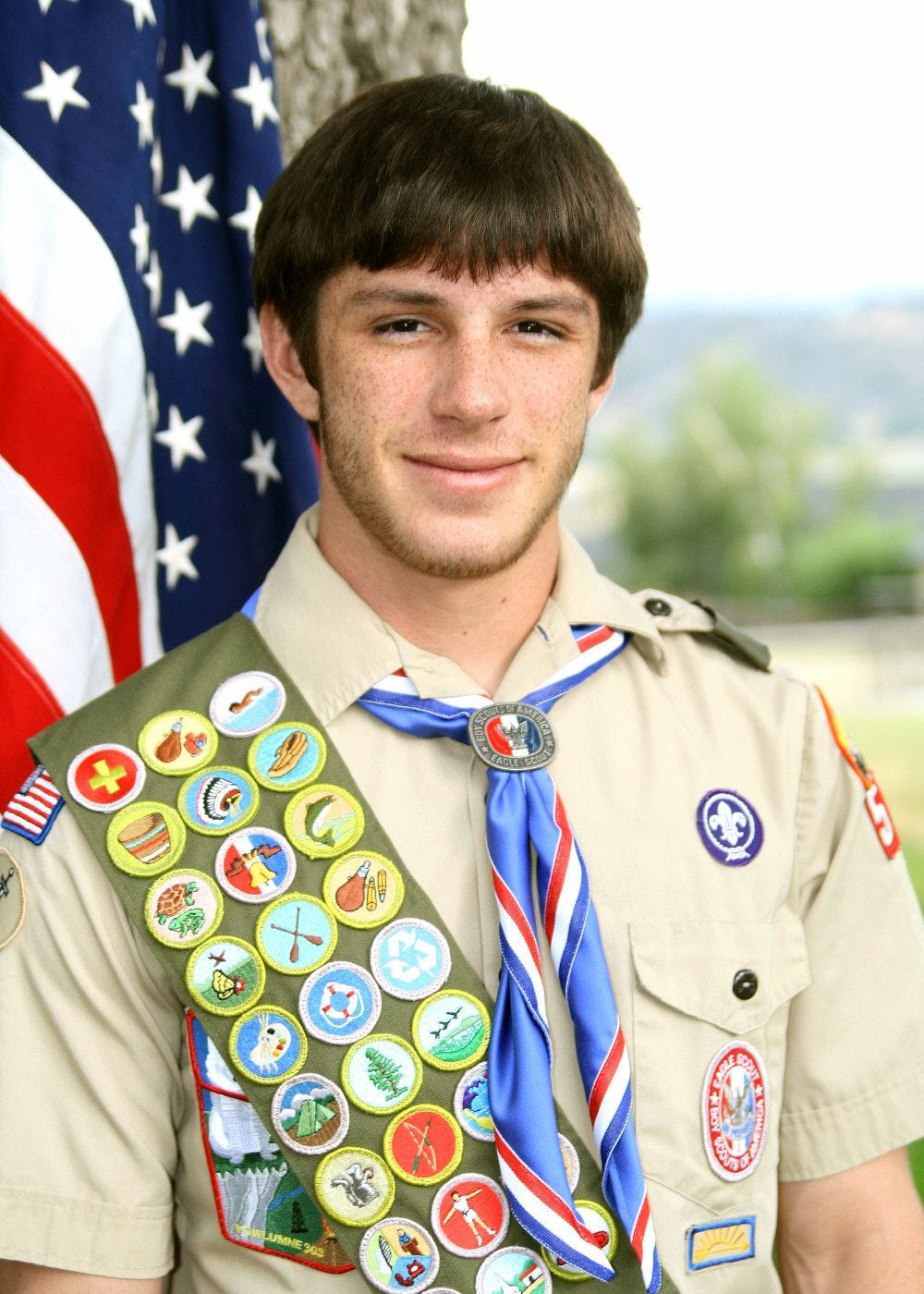 Trevor Reed is an Eagle Scout who served as a U.S. Marine. (Photo: Joey and Paula Reed)

Reed played sports growing up and loved to be outdoors. He is an Eagle Scout who enlisted in the Marines in 2011 where he signed up to be an infantryman. During boot camp, he was selected for the Presidential Support Program. He ended up becoming a Marine Presidential Guard.

One of his assignments included protecting Biden under the Obama administration at Camp David. He was honorably discharged in 2016.

The situation, as Joey and Paula understand it, is that Trevor Reed is in a pre-detention center, which is an old Russian prison, while his appeal makes it way through the country’s legal system.

“We can send letters to him every day. When we write a letter, we have to convert it into Russian, and paste it onto a website and then it’s sent to him. He can get that anywhere from one to five business days,” Joey Reed said.

The Russians read the letters and send a notice saying it’s been read and approved and given to the prisoner. Trevor’s parents usually include 55 rubles so that he can return his letter. Trevor’s return letter consists of a sheet with the same number on it as the letter his parents sent.

He has to handwrite his response in Russian, and the letter is photographed and sent back to Joey and Paula.

“We only have a few letters over the years that have been emotional, but most of these letters are just kind of filling in the facts or maybe venting,” Joey Reed said.

There are periods of time, however, where the couple lose all contact with Reed for several days. In March, Reed went sent to the hospital for an assessment and he disappeared for nine days. The Russians took him to an asylum and put him in a mental ward.

“He was with seven people with mental problems who were murderers. There was blood on the walls, a hole in the floor they use for the bathroom. Luckily, a doctor came in and said ‘Why is this guy in here?’ and they took him to a room with just one other guy,” Joey Reed said. “It took them seven days to get him out of there and back to his regular jail. So obviously, anytime we lose contact with him for any period of time, we are worried.”

Resolutions made so far

Congressman August Pfluger, R-Texas, is sponsoring H.Res 186 with Ranking Member Michael McCaul, R-Texas, denouncing the imprisonment and calling for the immediate release of Trevor Reed. It was introduced on March 3, 2021.

“He’s unlawfully held there and being used as a political prisoner. The charges are false and we need him to come home as soon as possible,” Pfluger told USA TODAY.

A companion bill, S.Res.67, has been introduced in the Senate, led by Sen. John Cornyn, R-Texas.

Joey and Paula are also in contact with Secretary of State Antony Blinken, who says that Trevor Reed and Paul Whelan, another former U.S. Marine who was detained by Russians, are always being brought up in the conversation with the Russians.

The couple also speak with the special presidential envoy for hostage affairs every week and are in constant contact with the embassy throughout the day.

“We are glad and grateful for that kind of support for Trevor from the government,” Paula Reed said.