New York City’s transit workers’ union has voiced its support for members who refuse to help the New York Police Department transport protesters to jail in the wake of a viral video that appears to show just that.

As nationwide protests against police brutality and the killing of Minneapolis man George Floyd grew Friday evening, a video circulated showing a crowd cheering as a city bus driver in Brooklyn stood outside his bus with his arms crossed. Brian Gresko, who tweeted the video along with other footage from the demonstrations, wrote that the bus driver was “refusing to drive it” after police started filling it with arrested protesters. 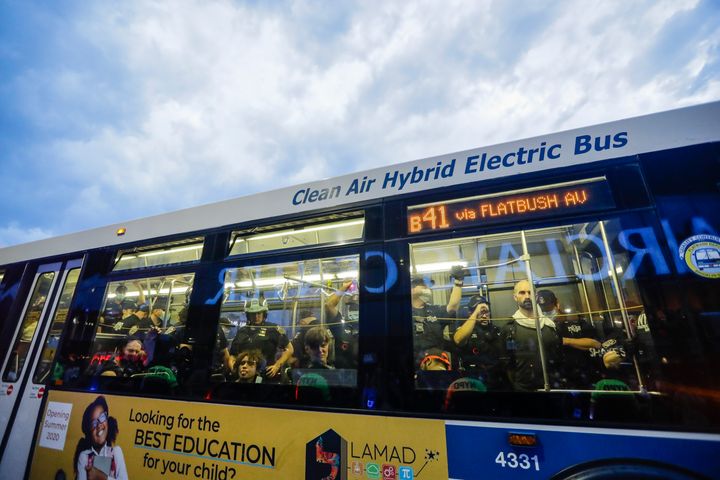 Around an hour after Gresko posted the video, Local 100 of the Transport Workers Union of America — which represents tens of thousands of transit workers in New York City ― tweeted its support for any bus drivers refusing to drive people at the behest of the NYPD.

J.P. Patafio, a TWU Local 100 vice president, made a similar statement to Motherboard.

Patafio told the NYC Metropolitan Transportation Authority that “our ops won’t be used to drive cops around” and that they were acting “in solidarity” with the bus drivers of Minneapolis, he said.

A union representing transit workers in St. Paul and Minneapolis, where protests sparked by the killing of George Floyd have raged for days, issued a statement Thursday asserting the right of its members to refuse to transport people for police.

The New York union’s stance is “not an attack” on the NYPD, Pete Donohue of TWU Local 100′s communications department tweeted Saturday.

“Transit workers aren’t cops or corrections officers and shouldn’t be compelled to move prisoners or arrestees,” he wrote. “That’s a law enforcement role.”