In media news today, an MSNBC reporter warns that Republicans in state legislature are passing voting laws that make ‘January 6 every day,’ a CNN medical guest says that companies should not treat the unvaccinated and vaccinated as equal, and a White House reporter asks Jen Psaki why Biden hasn’t ‘focused more on scolding the unvaccinated.’

Virginia Democratic Gov. Ralph Northam pushed back against a local reporter who continued to question his response to the recent I-95 gridlock.

Over the past few days, Northam continued to face criticism for his administration’s response to one of the nation’s largest interstate highways freezing over after an unusually heavy snowfall, leaving hundreds of motorists stranded for up to 27 hours. Though no injuries or deaths were reported from the interstate, several people have attacked the governor and the Virginia Department of Transportation for not responding promptly and failing to prepare the roads properly.

RALPH NORTHAM BLAMES VIRGINIA DRIVERS FOR GETTING STRANDED ON I-95: ‘PEOPLE NEED TO PAY ATTENTION’ 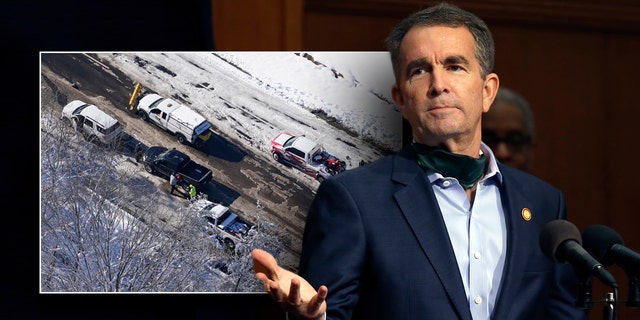 WRVA’s Matt Demlein likewise questioned Northam if there is any effort being done to determine what went wrong in the response or how the roads were being treated.

“Is there anything new with the 95 response, anything new in regards to determining what went wrong and what happened with the huge back up there?” Demlein asked.

Northam responded negatively to question saying “I don’t know why you’re sitting there saying what went wrong. This was a storm that we haven’t seen for a long time.”

He also added that instead of asking what went wrong that people “ought to sit back and say thank you so much to our agencies and roadside management, VDOT [Virginia Department of Transportation], the Virginia state police,” and others who helped over the week.

Northam began venting his frustrations over people who keep asking him “what went wrong” with the response.

(Virginia Department of Transportation via AP)

“I hate to vent on you right now, Matt, but I am getting sick and tired of people talking about what went wrong. I think we ought to be very thankful that nobody got hurt, nobody lost their lives, Interstate-95 is up and running, and people are back at home and back at work,” Northam said.

Before Demlein moved onto the next topic, Northam quickly suggested that the drivers on the interstate should be the ones to answer questions regarding what happened.

“I would also say, Matt, we knew that this storm was coming. We put warnings out. Why don’t you start asking some of these individuals that were out on the highway for hours one, did you know about this storm, two, why did you feel it was so important to drive through such a snow storm, and three, in hindsight, do you think maybe you should have stayed home or wherever you were rather than getting out on Interstate-95? I think that would be interesting, to hear that side of it,” Northam said.

NEW YEAR, NEW LOW FOR ‘NEW DAY’ AS CNN’S MORNING SHOW KICKS OFF 2022 WITH SMALLEST AUDIENCE EVER IN KEY DEMO

Northam prevously blamed interstate drivers on Wednesday when responding to criticism of the government’s response.

“We gave warnings, and people need to pay attention to these warnings, and the less people that are on the highways when these storms hit, the better,” Northam told the Washington Post.

While officers had not put an exact number of the drivers on the road at the time, photos from the scene depicted hundreds of unmoving cars and trucks. Among the drivers included Sen. Tim Kaine, D-Va., who documented his experience on Twitter and spent 27 hours on the road.

Northam will officially leave office on Jan. 15 after Republican Glenn Youngkin is set to begin his term as governor.