Fuel giant Ampol’s chair Steven Gregg says there’s no end in sight to a global petrol crunch due to western sanctions on Russia and reduced exports out of China, and it remains to be seen whether the federal government’s cut to the fuel excise can keep prices from rising.

Gregg made his comments after the Group of Seven nations – which include the US, the UK, three European countries and Japan – formally agreed to phase out or ban Russian oil earlier this week in a move to further isolate Moscow over its invasion of Ukraine.

“We don’t know how long the conflict is going to go on for and the effect of the oil price, or a number of factors that contribute to that,” Gregg told reporters after the company’s annual general meeting on Thursday. With the market for crude oil remaining tight, the fuel giant was now preparing for “all eventualities,” he said. 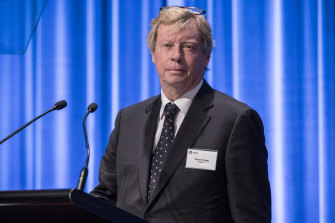 Ampol chair Steven Gregg says the company is preparing for ‘all eventualities’ as the oil supply crunch continues to tighten.Credit:Jessica Hromas

Looking at the surging prices consumers have to pay at the bowser, “whether that effect is mitigated by the fuel excise size reduction by the government, it’s hard to know,” he added.

The federal government in late March halved the fuel exercise to take heat off the bowser when national prices were soaring above $2 a litre.

The move pushed down prices for regular unleaded fuel by 39 cents per litre in Australia’s five biggest cities, according the Australian Competition and Consumer Commission.

However, the war in Ukraine has seen prices start to climb up again since mid-April. Australian Institute of Petroleum figures show prices are now above $1.80 a litre in Sydney and $1.784 cents per litre in Melbourne.

The cut to the fuel excise, which the government said had a net cost to the budget of $3 billion, is due to end in September and has drawn criticism from some experts, who point out there will still be volatile swings in the oil market that drive petrol prices.

Ampol’s chief executive Matthew Halliday doubled down on the company’s condemnation of the Russian invasion. He confirmed Ampol accepted two Russian cargoes of crude oil it had ordered before the conflict escalated that have since been discharged.

“As we’ve committed, we won’t be purchasing any further Russian-origin cargoes,” he said.

Halliday said oil supply had been affected by the sanctions on Russia, reduced exports out of China as it pursued a zero-COVID policy and a rebound in demand amid the ongoing global recovery from the coronavirus pandemic.

“[It’s] certainly a very tight market at the moment, but the excise has made a difference to the customers,” he said.