Gareth Evans, the Jetstar boss who has worked at Qantas for 23 years, is the latest in a long line of senior executives who have resigned under the airline group’s chief executive Alan Joyce.

But the Qantas board, led by chairman Richard Goyder, appears unperturbed at the senior talent that has departed the airline, and the deep knowledge of the company that they take with them when they leave. Nor does the board seem concerned about the corporate governance issues surrounding such a long-serving CEO.

Alan Joyce, who has been the Qantas CEO for almost 14 years, is one of the longest, non-founder CEOs serving on an ASX-listed company, and it appears he isn’t keen to pass the baton on. Nor is the board encouraging him to. Earlier this year, Goyder made a statement that left Joyce’s contract open-ended beyond 2023. 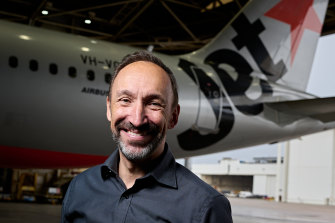 Jetstar CEO Gareth Evans will step down in December but gave no reason for leaving other than it was time to move on.Credit:Michael Quelch

Evans, who was appointed Jetstar’s boss in 2017, had held other senior roles such as Qantas International CEO and also the company’s chief financial officer. He was considered a potential successor but instead will step down in December, giving no reason for leaving other than it was time to move on.

Evans joins at least half a dozen other senior executives who have departed Qantas under Joyce, and some were considered as candidates to replace him. Among the others who have left were former chief financial officer Simon Hickey, another Jetstar boss Bruce Buchanan and Jayne Hrdlicka, who is now chief executive of Virgin Australia.

A 2019 PwC report on CEO success noted that while a board may be keen to keep on a long-serving CEO who has performed over a long period of time, the risk remains that the best possible successors within the senior executive ranks would become impatient and leave or be poached.

The report also said that virtually every top leader grows stale at some point and can easily become locked into a certain frame of mind the longer they are in the job, which is why change is important.

Richard Goyder chairs Woodside and Qantas, both top 100 ASX companies, and also the AFL Commission, which makes him extremely busy. Earlier this year, he spoke of the “incredible job” Joyce had done during the pandemic when many airlines globally filed for bankruptcy. Qantas during that period received close to $2 billion in government support through JobKeeper and other aviation-specific programs.

However, for the past few months there appears to have been a disconnect between the board’s perception of the job that Qantas’s senior management is doing, and the feedback the airline is receiving from both staff and customers.

Complaints from politicians, business people and other customers about the airline’s service have become a deafening roar.

Since the start of this year, criticism of Qantas’s customer service has ranged from delayed and cancelled flights – the airline’s on-time performance levels have been falling – to the failure of its multiple call centres to answer calls for hours, sometimes up to five to seven hours, or respond to emails and messages.

There are also complaints of missing bags, including most recently a woman whose bag was missing for four days: the bag contained her mother’s ashes. Her message to Qantas via the website went unanswered, until her partner took to social media. When the bag was finally delivered the thanks wasn’t to Qantas.

Joyce has since conceded the airline has been “rusty” since emerging from two years of hibernation, after earlier this year blaming customers for the airline’s problems, saying they were not “match fit”.

He went further on Wednesday telling Perth radio: “We absolutely are not delivering the service that we would expect to do.”

In a market update on Friday, Qantas told shareholders it had cut its net debt by $1.5 billion in the past six months to around $4 billion.

Then it talked about how it has put on additional resources to address customer service issues and to cope with the school holiday period, which begins this weekend. In the same release, the company said it would cut its domestic capacity by 15 per cent between July and September, amid high fuel prices and staffing issues.

While the airline quantified how much it had cut net debt, it still hasn’t put a figure on how much it has spent hiring additional staff. Instead, it revealed it would give 19,000 staff a $5000 bonus but only if they accept new work contracts, which offer a 2 per cent annual pay rise, which is below the current level of inflation.

In the market update, Joyce provided commentary on the departure of Evans, wishing him the best and thanking him for his service. However, Joyce didn’t directly comment on the problems of customer service. 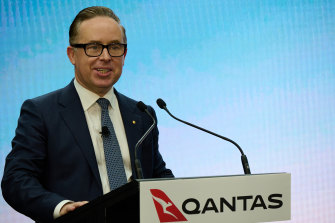 While the news that Alan Joyce would remain Qantas CEO until at least the end of 2023, and possibly beyond, was welcomed by shareholders, it wasn’t received as positively by unions, some staff members and customers.Credit:Michael Quelch

Instead, the release generically said the Qantas group thanked customers for their patience and understanding while the airline works through a challenging restart. Other transport companies and even the hospitality industry have come out of a two-year hiatus caused by the pandemic, but some would argue they are doing a better job at meeting their customers’ expectations than Qantas.

The missing part in Friday’s market update was an apology to customers.