On Wednesday, John Dean reacted on Twitter to news that Trump’s former fixer, Michael Cohen, was set to meet with investigators in Manhattan District Attorney Cy Vance Jr.’s office for a seventh time.

“From personal experience as a key witness I assure you that you do not visit a prosecutor’s office 7 times if they are not planning to indict those about whom you have knowledge,” Dean said.

“It is only a matter of how many days until DA Vance indicts Donald & Co.”

The Manhattan District Attorney’s Office did not immediately respond to Insider’s request for comment on Dean’s tweet.

Vance’s office has been investigating Trump and his organization since 2018, and has stayed tight-lipped on the scope of the probe. His team scored a major victory last month when the Supreme Court ruled that Trump could not continue withholding his tax returns from Vance’s office.

Cohen also declined to tell Reuters on Wednesday what he planned to discuss with prosecutors.

Cohen was one of Trump’s closest associates before he turned on the then-president in 2018 and started cooperating with investigators who were looking into hush-money payments to Trump’s alleged mistresses during the 2016 election. Cohen eventually pleaded guilty to campaign finance and fraud charges.

Comparisons have often been made to the investigations that shadowed both Nixon and Trump’s presidencies. In these analogies, Cohen’s role most closely resembled that of Dean, who turned on Nixon when he felt that the president and his cronies were trying to make him the fall guy for the Watergate coverup, according to NPR. 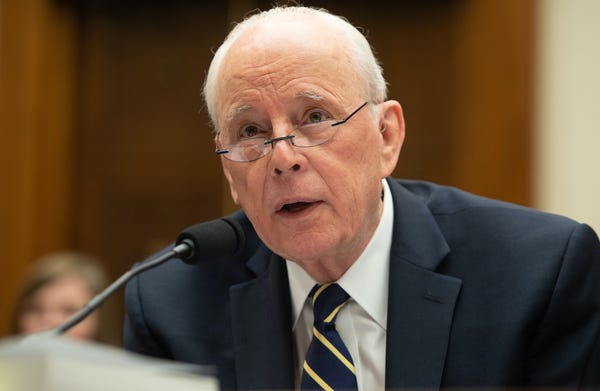 Dean went on to be the star witness in the Senate’s investigation into the break-in at the Democratic National Committee’s headquarters at the Watergate complex in Washington, DC.

Dean testified before the Senate in June 1973, detailing his role in the Watergate coverup, and helping the committee realize that there were Oval Office tapes proving that the president knew about the plot.

Nixon resisted turning those tapes over, but the Supreme Court eventually ruled that he had to, and Nixon resigned two weeks later, according to NPR.

Both Cohen and Dean were sentenced to prison time for their role in the respective Trump and Nixon affairs. Dean served four months of a four-year sentence, according to NPR. Cohen is currently serving out his three-year sentence under home confinement, Reuters reports.