Australians stuck at home in the pandemic splurged on new lounge sets and dining tables throughout June and July, prompting furniture retailer Nick Scali to predict a spike in profits for the December half.

The company told investors on Thursday it expects earnings to jump between 50 and 60 per cent for first half of its 2021 financial year, sparking a nearly 20 per cent rally in its share price. The bullish outlook came with a caveat that there would be no further extensions to the six-week lockdown in Melbourne, nor any further supply chain delays that could affect deliveries.

"In recent months, the furniture industry has experienced unprecedented year on year growth as consumers reallocated their spending into the home given an inability to travel, combined with an increased amount of time spent at home," managing director Anthony Scali said. 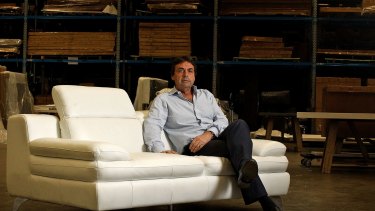 The boom in the new financial year follows a muted full-year result which the company reported on Thursday, with revenue for the 12 months to June 30 down 2.1 per cent to $262.5 million and net profit flat at $42.1 million.

These results were ahead of analyst forecasts and the company's own profit guidance, and was largely achieved by a $5 million reduction in costs, primarily in marketing and property expenses.

Coronavirus restrictions forced Nick Scali to temporarily close its 55 Australian stores in March and April, which were estimated to have cost the business between $9 and $11 million.

However, the surge in housebound Australians looking to spruce up their homes prompted a sharp rebound in sales after restrictions began to ease, with orders across May and June surging 72 per cent on the prior year.

These orders have flown through into the first half of the new financial year, the company said, leading to an "extremely buoyant" 70 per cent increase in sales through July. Revenue for the first half will increase substantially, along with a 50 to 60 per cent rise in profits, it said.

Nick Scali's online business, which was only launched in April in response to the lockdown, processed $3 million in sales across the fourth quarter, with the company expecting the channel to contribute $4 million towards its earnings for the 2021 financial year.

Citi analyst Sam Teeger said the result was well ahead of expectations. "While this extraordinary rate of sales growth is unlikely to continue post calendar 2021, the market may be underappreciating industry consolidation opportunities available to Nick Scali," he said.

Nick Scali claimed $3.9 million via the government’s JobKeeper scheme and also received around $200,000 in rent concession from landlords, figures which were excluded from the company’s final profit and sales figures.