EXCLUSIVE: LAS VEGAS – Republican Gov. Chris Sununu of New Hampshire says that a decision could come as early as next week on whether he’ll run for the Senate next year in a race that could ultimately decide whether the GOP wins back control the chamber in the 2022 midterm elections.

Sununu, in an exclusive interview with Fox News ahead of his lively address Friday night at the Republican Jewish Coalition’s annual leadership summit in Las Vegas, said that “my sense is that I’ll probably come to some decision in the next week or so. Maybe sooner.”

And with Thanksgiving and the holiday season fast approaching, the governor added that “I think I’d like to make a decision before the holidays, frankly. I don’t want this weighing on me and on the citizens…over the holidays.”

The governor is deciding whether to run for the Senate by launching a GOP challenge against Democratic Sen. Maggie Hassan, run for reelection to a fourth two-year term steering the Granite State, or not run for anything in 2022 and return to the private sector.

National Republicans view Hassan, a first-term senator and Sununu’s predecessor as New Hampshire governor, as very vulnerable heading into next year’s midterms. And they see Sununu, whose poll numbers are flagging but still remain very high among Republicans and in positive territory among independents, and who’s carefully navigated his relationship with former President Donald Trump the past six years, as their key to flipping a crucial blue seat red.

The Republicans need a net gain of just one seat to recapture the Senate majority they lost when they were swept in January’s twin Senate runoff elections in Georgia. While they’re defending 20 of the 34 seats up for grabs next year – including five open seats – the GOP sees pick up opportunities to flip a blue seat red in the battleground states of Arizona, Georgia, Nevada, and New Hampshire.

The lobbying effort by national Republicans this year has included phone calls from Senate GOP Leader Sen. Mitch McConnell of Kentucky and other prominent Republicans.

Sen. Ted Cruz of Texas, the conservative firebrand from Texas and runner up to Trump in the 2016 Republican presidential nomination race, told the audience at the conference to urge Sununu to run for the Senate. 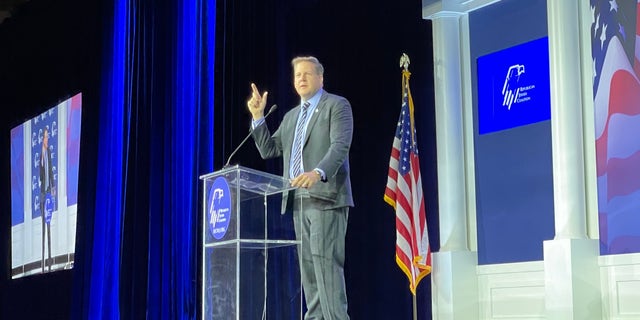 “Every person here needs to come up to Chris and say ‘governor is great but you need to run for Senate.’ Because this man could single handedly retire Chuck Schumer as majority leader of the Senate,” Cruz said to applause.

Asked if the full court press to convince him to run for Senate has stepped up a notch in the wake of the Republicans’ strong showing in elections in Virginia and New Jersey on Tuesday, Sununu told Fox News “I supposed there’s a little more tension to it now that we’re passed Election Day.”

Sununu’s appearance at the RJC conference – a major gathering of top party leaders, activists, rainmakers and mega donors – sparked more speculation that Sununu was leaning towards a Senate run, which would like make the New Hampshire showdown one of the most competitive, combative and expensive races in the country.

But the governor pushed back on such speculation, saying “there’s really nothing to be read into it other than I’m always willing to go out and talk about how we’ve had success in New Hampshire, some of the things that allowed us to connect to voters in New Hampshire and hopefully spread that to what might help in other states.” 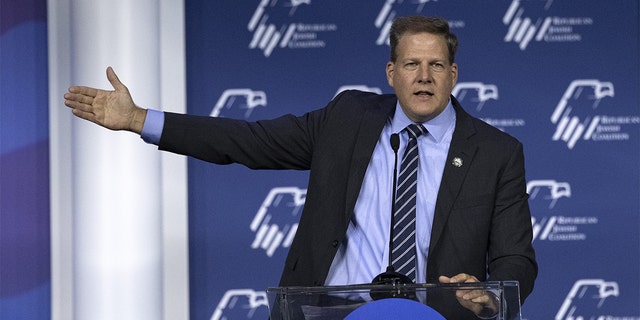 Sununu’s easy going demeanor during his Fox News interview was replaced by a much more energetic and combative speech to the audience at the RJC.

And he threw plenty of red meat to an audience hungry for it.

Taking aim at Vermont – New Hampshire’s progressive neighbor to the west – the governor said “when (Sen.) Bernie Sanders comes within five miles of our border, we all get alerts on our phone, because we’re trying to beat socialism back as far as we can.”

And targeting Ben Cohen and Jerry Greenfield, the founders of Ben and Jerry’s ice cream and major Sanders supporters, Sununu argued that “I’ve got two lunatics to my left in Vermont named Ben and Jerry.”