When New York state Sen. Gustavo Rivera, a Bronx Democrat, first got to Albany in 2011, being an outspoken progressive was often a lonely task.

Rivera still remembers the first time he was “Percoco’d” ― Rivera’s joking moniker for the nasty phone calls he would get from New York Gov. Andrew Cuomo’s top aide, and enforcer, Joe Percoco.

Rivera had joined a demonstration on the lawn of the governor’s mansion calling for the state to raise taxes on millionaires in order to fully fund public education. Percoco berated Rivera for “disrespecting” the governor’s house and subsequently disinvited the state senator from a reception honoring former New Mexico Gov. Bill Richardson (D).

Colleagues warned Rivera to keep his head down, but he ignored them ― and now he feels vindicated.

Percoco went to prison in September 2018 for soliciting bribes. And this week the redistributive economic policies that Rivera dreamed about in 2011 became a reality.

On Wednesday, New York’s overwhelmingly Democratic state legislature passed a budget for the 2022 fiscal year that will raise $4.5 billion in taxes on millionaires and corporations to fund economic relief for undocumented immigrants, schools and housing assistance.

Cuomo, who beat back other tax hikes for a decade, has promised to sign it.

The progressive slant of the tax-and-spending legislation marks a tidal change in Empire State politics that would have been hard to imagine six months ago, let alone at the start of Cuomo’s tenure in 2011.

“The proof is in the pudding,” Rivera declared. “We were able to achieve so many things that the governor has resisted for so long.”

It’s possible because of a combination of massive progressive gains in the state legislature, aggressive pressure tactics and the rapid decline in Cuomo’s influence, all of which converged to turn New York into a national leader in left-leaning economic policy.

“The Biden administration should be looking to New York to say, ‘This is what Democrats can and should be doing to deliver for working-class people,’” said Cea Weaver, campaign coordinator for the tenants’ rights group Housing Justice for All. “It’s exciting!” 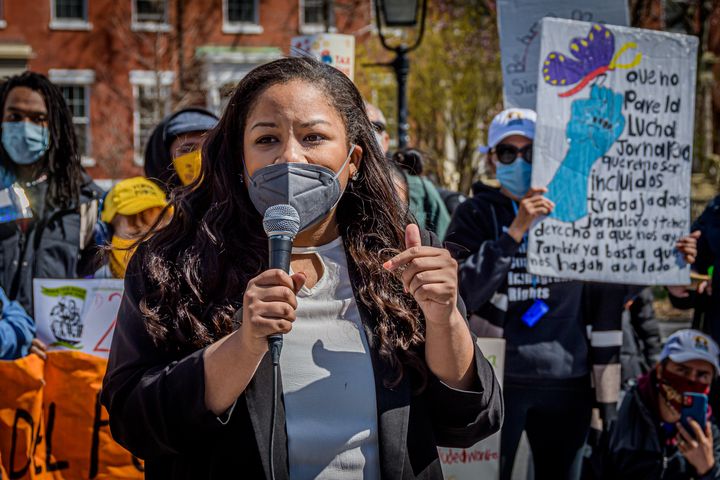 A Backlog Of Progressive Priorities

Although New York was facing a $15 billion budget deficit due to the economic fallout from the coronavirus pandemic, federal aid and new tax increases allowed the state government to adopt a $212 billion budget. It’s a significantly larger sum than both the $177 billion budget that Cuomo signed a year ago at the height of the pandemic or the $175 billion budget a year before that when COVID-19 was still inconceivable.

The new budget has its share of standard Democratic priorities, but the suite of laws that collectively authorize spending priorities and regulations for the coming fiscal year also introduces a host of groundbreaking initiatives. In a key win for Weaver’s group, the state has extended its eviction moratorium for another year and created a $2.4 billion fund for low- and middle-income tenants to pay off as much as 12 months’ rent payments for which they are in arrears because of the economic effects of the COVID-19 pandemic.

For the first time in a decade, the state is due to fully fund public schools in accordance with a 2006 court ruling requiring New York to spend billions of dollars more to fulfill its constitutional obligation to provide residents an adequate education. The new state budget increases the court-mandated funding, known as Foundation Aid, by $1.4 billion, enabling New York to make up for years of underpayment.

In addition, New York has created a $2.1 billion “excluded workers” fund that makes undocumented immigrant workers who lost work eligible for up to $15,600 in unemployment benefits. Because of these workers’ immigration status, they have been ineligible for federal benefits. 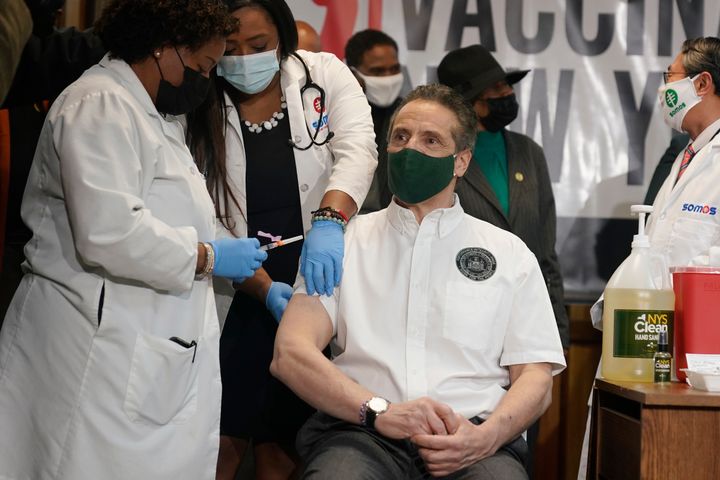 The most radical element of New York’s budget, though, is the way it funds these priorities by asking the state’s wealthiest residents to pay more in taxes.

New York’s millionaires are now due to pay the highest state income taxes in the country.

The state’s corporate income tax rate is also going from 6.5% to 7.25% for companies with incomes of $5 million a year or more.

Kathryn Wylde, president and CEO of the Partnership for New York City, a big business lobby, told Daily News columnist Errol Louis that raising taxes in spite of the federal aid the state is due to receive is “pure venom.”

Wylde’s criticism reflects the frustration of the larger business community with its diminished clout in Albany.

The most obvious short-term reason for corporate New York’s losing hand is the declining influence of Cuomo. The business-friendly governor has spent the past month fending off calls for his resignation over allegations of sexual misconduct and for covering up the number of COVID-19 deaths in the state’s nursing homes.

Since he has been focused on shoring up his public image, Cuomo was less directly involved in negotiating the budget than he ordinarily would be.

What’s more, Democrats in the state legislature have the votes to override a veto by Cuomo.

Given Cuomo’s desire to retain support in the state Assembly, which has the authority to impeach him, it is unlikely that he would risk alienating Democrats with a contentious budget fight, according to Bradley Tusk, a venture capitalist and centrist political consultant.

“Cuomo didn’t have the power to stop them,” Tusk said. 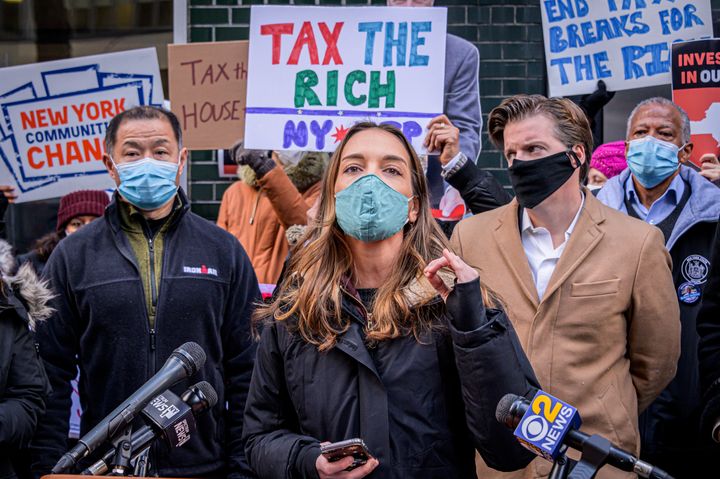 Cuomo’s new weakness, however, is only one of several reasons for the progressive nature of the budget. A decade of progressive organizing had shifted the ground underneath Cuomo long before scandals reduced his leverage.

For his first eight years in office, Cuomo maintained a business-friendly consensus in Albany by doing what he could to keep Republicans in charge of the state Senate. For example, he quietly blessed the formation of the Independent Democratic Conference, a group of rogue Senate Democrats that effectively guaranteed GOP control of the chamber.

But the 2016 election of Donald Trump as president radicalized New York Democrats. These Democrats, eager to fight back against Republicans, were furious to learn about the IDC’s existence, providing an organic constituency for a Democratic takeover of the state Senate led by seasoned outfits like the New York Working Families Party.

“There is a bigger organized left than has existed recently and is working together with organized labor and some nonprofits to bring more people into politics,” said Weaver, a member of the New York City chapter of the Democratic Socialists of America, which also experienced explosive growth during this period.

Although Cuomo brokered a deal to dissolve the IDC in April 2018, progressives refused to give up their campaign against the ex-IDC members. They succeeded in ousting six out of eight, signaling that New York Democrats were prepared to punish lawmakers who betrayed the party’s core principles.

For its part, DSA helped elect Julia Salazar to the state Senate in a separate 2018 primary challenge. The Brooklyn Democrat has since been joined by five more DSA-aligned Democrats.

Facing a Democratic-controlled legislature for the first time in 2019, Cuomo proved more pliant. He reluctantly agreed to sign a bill strengthening rent regulations for the state’s population of struggling tenants, defying the real estate industry with which he was usually aligned.

Weaver sees the bill’s passage as a key turning point.

“Ever since 2019 … organized people are able to outmaneuver the governor and win truly transformative, redistributive legislation in Albany,” she said.

The progressive changes in this year’s budget would likely have been possible without the larger Democratic majorities in the legislature.

“There were a lot more receptive ears on the inside than there normally would be,” state Senate Deputy Majority Leader Michael Gianaris, a Queens Democrat, said. 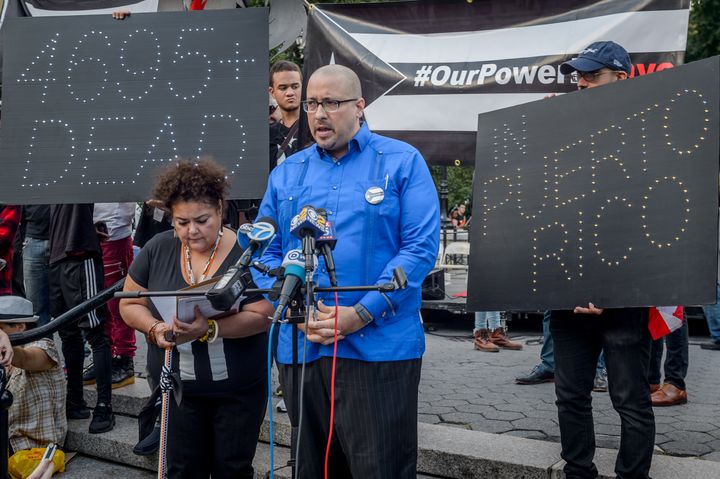 Even before the 2020 election results were known, a coalition of groups that included the New York WFP, the union-backed Stronger Economy for All coalition and Weaver’s Housing Justice for All were plotting a strategy to force Cuomo to raise taxes.

The initiative that emerged from those discussions was the Invest in Our New York (IONY) campaign, which formally launched in January.

Together, Bailin and Klein crafted a simple message ― “Tax the rich” ― with a clear target: Cuomo.

“You have to have a united message and keep hammering it over and over again,” Bailin said.

Every Friday morning, IONY leaders met with a group of core progressive lawmakers, or “champions,” to talk strategy.

The coalition released a report on March 19 showing how the wealth of New York’s super-rich exploded during the pandemic and assembled an open letter from wealthy New Yorkers asking Cuomo to raise their own taxes.

When it came to rebutting claims that tax hikes would prompt a mass exodus from New York, the research of Cornell University sociologist Cristobal Young, author of “The Myth of Millionaire Tax Flight,” proved critical.

Based on an analysis of a dozen years of tax returns for 3.7 million Americans with annual incomes of $1 million or more, Young found that 0.3% of the total moved to lower-tax states.

Tusk conceded that the tax hikes were not likely to trigger a flood of wealthy departures from New York but warned that “since so few people pay such a high percentage of the taxes, even a modest flight can cause a lot of problems.”

“I hope the new spending does more than just make the left feel good because otherwise it would have accomplished more either by remaining in the economy or going to people directly through [universal basic income],” Tusk added.

In the end, IONY and its allies employed a mixture of policy horse-trading and grassroots pressure to cajole just enough moderate Democratic holdouts.

Volunteers from New York City DSA canvassed the neighborhoods of fence-sitting lawmakers, placing custom-made door hangers at voters’ doors with the office phone number of the lawmaker and a model script to use during a call. 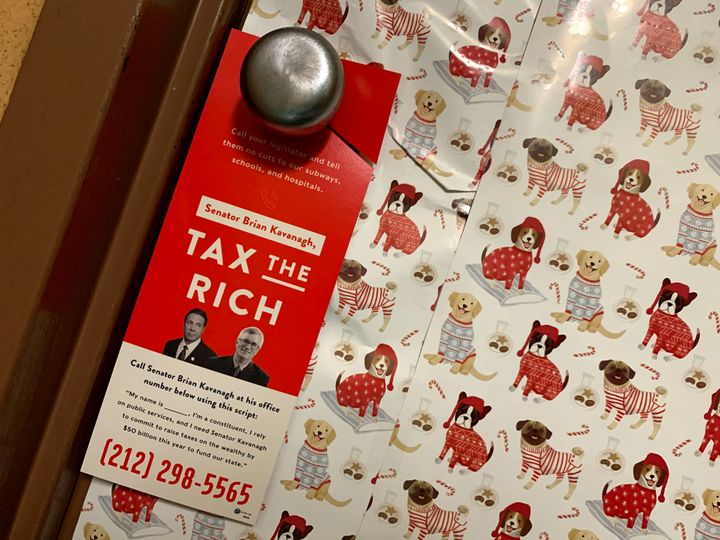 “Call your legislator and tell them no cuts to our subways, schools and hospitals ― Senator Brian Kavanagh, tax the rich,” a door hanger targeting a Lower Manhattan Democrat stated. (He ended up voting yes.)

In the course of negotiations, plenty of progressive revenue raisers got left on the cutting-room floor, including a tax on large inheritances, a financial transactions tax and a long-term capital gains surtax.

The left wants that additional revenue so New York can, among other things, enact universal pre-kindergarten education, adopt single-payer health care and provide housing vouchers to the state’s homeless population.

“We’re not done yet,” Brooklyn state Sen. Jabari Brisport, a DSA-aligned Democrat, said at a Wednesday news conference. “This is bittersweet to me because the amount that we’re raising ― 3, 4, 5 billion, what is that to the billionaires?”

Rivera has found himself commending his younger progressive colleagues for their passion and sharing in their frustration that the bill wasn’t even more ambitious. He then reminds them of just how far the legislature has come in such a short period.

“$4.5 billion in new revenue is nothing to sneeze at,” Rivera said.