The Democratic state lawmaker has “unequivocally” denied the allegations but wrote in a letter to New Mexico’s secretary of state that she felt her resignation was in the state’s best interest, according to the Santa Fe New Mexican.

“This is a decision that weighs heavily on me, and which I have made after a tremendous amount of consideration of the best interest of the people,” she wrote. “In short, because I must devote a significant amount of time and energy to fully defend against these allegations, I believe it is in the best interest of this state and the House of Representatives that my position as both a member of the House of Representatives and Majority Floor Leader be replaced with a representative who can fully and competently resume the tasks and duties that are necessary to continue serving this great state.”

Her decision was supported by Gov. Michelle Lujan Grisham and Democratic leaders in the Statehouse.

“These are incredibly serious and significant allegations,” Grisham, a Democrat, said Friday. “I anticipate a rigorous and thorough law enforcement investigation.” 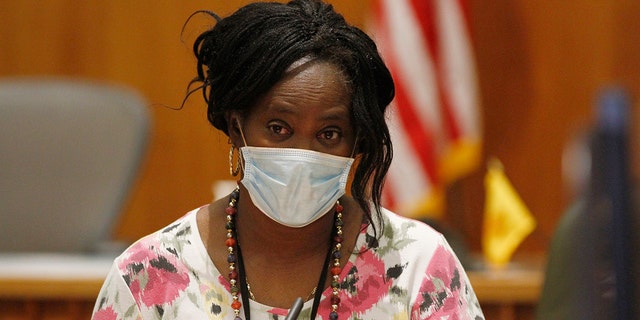 House Speaker Brian Egolf released a joint statement with House Majority Whip Doreen Gallegos and House Majority Caucus Chair D. Wonda Johnson on Friday: “Given the weight of the allegations against Rep. Stapleton and the ongoing investigation, her resignation from the House is appropriate and in the best interest of the Legislature and the state.”

State Republican leaders in the Senate called the evidence “damning” in a statement Friday, according to the New Mexican.

“Corruption by public officials has long plagued our state and we must send a message that no person, regardless of title or status, is above the law,” the statement said.

“Corruption by public officials has long plagued our state and we must send a message that no person, regardless of title or status, is above the law.”

Authorities executed search warrants at the Albuquerque Public Schools offices and Stapleton’s home this week as part of the investigation, which also includes alleged illegal kickbacks and possible violations of a law governing the conduct of state lawmakers.

Stapleton oversees career technical education for Albuquerque Public Schools, the largest school district in the state and the top employer in Albuquerque. She is on administrative leave.

District Superintendent Scott Elder’s allegations of fraud prompted the investigation into Stapleton’s conduct earlier this year, connected to her dealings with Robotics Management Learning Systems LLC, a company that provides computer software to the district.

“Our previous system did not establish adequate controls over this employee,” Elder wrote in an email to district employees earlier this week. “The internal processes failed to stop this fraud. For this, I apologize to you and the public. Most of all, I apologize to our students and their families. I’m deeply sorry for the harm done as a result of this.”

Stapleton told the district the company provided a unique interactive program called CyberQuest, giving it as a justification for sole-source contracting, according to a search warrant affidavit released Wednesday. The district said the program appeared to be a standardized online quiz that wasn’t used by many students.

Investigators and school district officials questioned the existence of the company because it had no physical presence and only a Washington, D.C., address and New Mexico post office box.

Stapleton intervened when the company’s contract with the school district appeared to be in jeopardy, providing documentation and acting as a go-between, according to a search warrant affidavit.

While it had a sole source contract for years, the company went through the formal bidding process in 2019. The district stuck with the company but for less than it had been paying in prior years. Overall, the district paid the company more than $5.4 million from 2006 until May 2021.

The search warrant affidavit showed that Stapleton had access to the post office box where checks were being sent to Robotics, and video surveillance showed her depositing checks from the school district for Robotics on multiple occasions.

Stapleton’s legislative actions and more than $950,000 in checks from the company to nonprofits, a restaurant and a bank account linked to her are also being investigated. From there, some money went directly to Stapleton, investigators said.

Stapleton, a former teacher, began serving in the Legislature in 1995.

the Associated Press contributed to this report.