Netflix could introduce its lower-priced ad-supported tier by the end of the year, a more accelerated timeline than originally indicated, the company told employees in a recent note.

In the note, Netflix executives said that they were aiming to introduce the ad tier in the final three months of the year, according to two people who shared details of the communication, speaking on condition of anonymity to describe internal company discussions. The note also said that they were planning to begin cracking down on password sharing among its subscriber base around the same time, the people said. 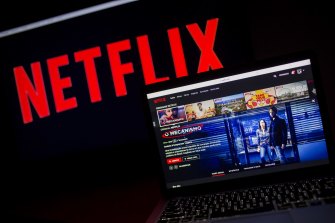 Netflix shares tumbled last month after it announced it lost 200,000 subscribers in the first three months of the year — the first time that has happened in a decade — and expected to lose 2 million more in the months to come.Credit:Bloomberg

Last month, Netflix stunned the media industry and Madison Avenue when it revealed that it would begin offering a lower-priced subscription featuring ads, after years of publicly stating that commercials would never be seen on the streaming platform.

But Netflix is facing significant business challenges. In announcing first-quarter earnings last month, Netflix said that it lost 200,000 subscribers in the first three months of the year — the first time that has happened in a decade — and expected to lose 2 million more in the months to come. Since the subscriber announcement, Netflix’s share price has dropped sharply, wiping away roughly $US70 billion ($100.9 billion) in the company’s market capitalisation.

Reed Hastings, Netflix’s co-chief executive, told investors that the company would examine the possibility of introducing an advertising-supported platform and that it would try to “figure it out over the next year or two.”

Netflix currently offers a variety of payment tiers to access its streaming service, charging up to $22.99 a month for a subscription in Australia. The new ad-supported tier will cost less. Other streaming services have similar plans.

Indeed, in the note to employees, Netflix executives evoked their competitors, saying that HBO and Hulu have been able to “maintain strong brands while offering an ad-supported service.”

Last month, Netflix also announced that it intended to begin charging higher prices to subscribers who share their account with several people.

“So if you’ve got a sister, let’s say, that’s living in a different city; you want to share Netflix with her, that’s great,” Greg Peters, Netflix’s chief operating officer, said on the company’s earnings call. “We’re not trying to shut down that sharing, but we’re going to ask you to pay a bit more to be able to share with her.”