New York (CNN Business)“Stranger Things 4 — Vol. 2” hits Netflix this weekend, and the kids from Hawkins, Indiana, are back at just the right time for the streaming giant.

It’s been an awful 2022 for Netflix. Its stock is down 70% this year. In April, the company reported that it lost subscribers for the first time in more than a decade. Last week, Netflix laid off 300 employees. Its earnings report later this month is projected to show a loss of two million more subscribers.
But there’s one thing that has been great for Netflix (NFLX): “Stranger Things.”

The first part of the science fiction horror series’ fourth season debuted in May to record numbers, becoming Netflix’s most popular English-language TV show. It’s been No. 1 on Netflix’s English top 10 list all four weeks since its premiere, and it also helped make a song from 1985 a big hit again.

So why would a company that revolutionized the viewing experience with binge watching split up its biggest franchise into two parts? The answer isn’t strange at all.

Splitting up the upside down

The two premieres take place in two different quarters for the company. “Stranger Things 4— Vol. 1” dropped on May 27, which is in Netflix’s second quarter, and “Vol. 2” hits on July 1, which kicks off the company’s third.

Fans of the popular show are hardly going to cancel their membership before they’ve seen the entire season. With new episodes straddling two different quarters around holiday weekends, the company has a better chance of retaining subscribers, which it needs to do to keep Wall Street happy.
The other, non-monetary reason that “Stranger Things” is split up: the show is massive this season. 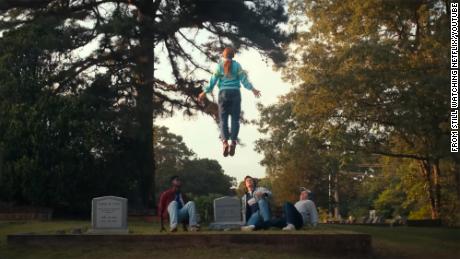 “With nine scripts, over eight-hundred pages, almost two years of filming, thousands of visual effects shots and a run time nearly twice the length of any previous season, ‘Stranger Things 4’ was the most challenging season yet, but also the most rewarding one,” the Duffer Brothers, the show’s creators, wrote in a note in February. “Given the unprecedented length, and to get it to you as soon as possible, season 4 will be released in two volumes.”
The Duffers weren’t being hyperbolic.
“Stranger Things 4 — Vol. 1” is roughly nine hours long. The final two episodes that make up “Vol. 2” have run times that match feature films, with episode eight running an hour and 25 minutes and episode nine coming in at a whopping two hours and 30 minutes.

To binge or not to binge? How about a split?

So there’s a business reason and a creative one for splitting the season. But there’s also another rationale: it keeps the show in the public consciousness.
“They changed things up a little by splitting the release of ‘Stranger Things’ into two halves,” Zak Shaikh, vice president of programming at research-based media firm Magid, told CNN Business. “But in general they can slow down the release of some of their major franchises, so those shows get to stay part of the conversation for longer.”
By having “Stranger Things” episodes separated by a month or so, Netflix gets two bites at the apple, markets the same season twice and keeps the show top of mind for its viewers.
This isn’t the first time Netflix has split up a series. The final season of “Ozark,” another Netflix hit, was split over two quarters when it premiered episodes from its final season in January and April earlier this year.

There’s been a lot of debate around whether streamers should release episodes weekly or all at once. Netflix — which has primarily stuck to the binge model — may have found a middle ground.
“Bingeing worked as a strategy to disrupt the marketplace,” Shaikh said. “But it doesn’t maximize the value of hot properties.”
Source: Read Full Article