The Bank of England Base Rate is currently being maintained at a historic low of 0.1 percent. In response to the coronavirus outbreak, the rate was slashed via two successive cuts back in March 2020, prior to which the Bank Rate stood at 0.75 percent.

Today, the quarterly Monetary Policy Report – which sets out the economic analysis and inflation projections that the Monetary Policy Committee uses to make its interest rate decisions – was published.

As well as confirming the Bank Rate would be held at 0.1 percent, the central bank announced its decision over whether negative interest rates would be viable.

A consultation with banks was launched in September last year, to see how they would handle the potential of taking interest rates negative.

Today’s report confirmed: “While the Committee was clear that it did not wish to send any signal that it intended to set a negative Bank Rate at some point in the future, on balance, it concluded overall that it would be appropriate to start the preparations to provide the capability to do so if necessary in the future.

“The MPC therefore agreed to request that the PRA should engage with PRA-regulated firms to ensure they commence preparations in order to be ready to implement a negative Bank Rate at any point after six months.” 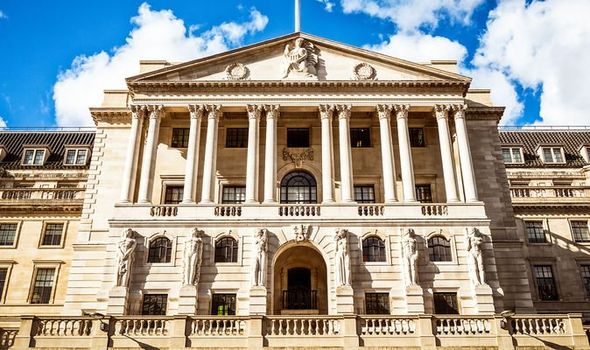 Hinesh Patel, portfolio manager at Quilter Investors, commented: “While the market pricing for negative interest rates has persisted for some time, today the Bank of England has quashed the idea of rates going sub-zero, at least for now.

“We would have to see significant economic weakening in the UK for them to become a reality, and with inflation expected to tick up as the year goes on, the BoE can’t afford to sink sterling as we get back into recovery mode.

“Importantly, the BoE will be watching the unemployment rate closely, particularly given we should begin to see the roadmap emerging for how the furlough scheme and business rates exemptions get withdrawn.

“The unemployment rate without furlough will be running well above 10 percent, and this could easily go higher, so the Bank needs weapons in its arsenal if it is to continue tackling this crisis.

“That said, there are reasons to be optimistic as a UK investor. With the hugely successful vaccination drive and supply issues being overcome, it’s not unrealistic to believe the second half of the year will produce the return of consumer confidence.

“With recent economic data also beating estimates of late, it could be that we are past the point of peak pessimism.”

Myron Jobson, Personal Finance Campaigner, interactive investor, said: “It is clear from the Bank’s tone that preparedness does not necessarily mean negative rates are on the cards, nevertheless, even the preparations will be enough to worry savers.

“News that the base rate will remain at 0.1 percent for the time being offers no reprieve to savers who have seen rates cut back to the bare bone since the onset of the pandemic – from 0.75 percent to 0.25 percent then to just 0.1 percent – all in the space of eight days in March.

“However, it could be a case of ‘never say never’ when it comes to the base rate falling to zero or going negative as part of attempts to rejuvenate the UK economy from the Covid malaise.

“What this would actually look like for savers remains to be seen, but the prospect of being charged to deposit cash into a savings account is likely to have huge ramifications on the nation’s savings habits.

“Many might resort to taking the cash out of savings accounts and let’s hope people don’t resort to shoving money under the mattress.

“In the current low interest rate environment, many people turned to investments to make their money work harder for them.

“Long term this is encouraging – taking too little risk can mean that you won’t achieve your goals, just as taking too much risk can be harmful to your long-term wealth.”

George Vessey, Currency Strategist at Western Union Business Solutions, commented on the pound to euro exchange rate today ahead of the decision.

He said: “The British Pound is weakening ahead of the Bank of England’s (BOE) ‘Super Thursday’ policy meeting at midday today.

“GBP/USD has slipped under $1.36 and is on track for a meaningful weekly loss, which could fuel a full-blown reversal if $1.35 gives way. GBP/EUR remains afloat the €1.13 handle thanks to the overly weak Euro.

“Market participants are expecting the BOE to keeping interest rates at record lows and its quantitative easing programme unchanged today, but all eyes will be on its review of the feasibility of negative interest rates and its updated economic projections.

“Although the UK is in a third national lockdown and economists have reduced growth estimates for 2021, ongoing BOE action has cleared the way for the Treasury to be the main source for further support.

“Affordable government borrowing is integral and takes the pressure off having to reduce its deficit any time soon.

“How might sterling be impacted though? Keeping sub-zero rates as a potential tool to support the economy during this pandemic could send sterling even lower but taking such a policy move off the table would likely send sterling higher.”

What do negative interest rates mean for savers and mortgage holders?

Azad Zangana, Senior European Economist at Schroders, shared his insight into what interest rates turning negative could mean for savers and those who have a mortgage.

“The coronavirus pandemic continues pose a significant threat to the UK economy. The Bank of England (BoE), therefore, wants to keep money in the real economy and to kick-start spending,” he explained.

“The intention is to get money flowing out of banks and into the economy in the form of loans and mortgages.

“Quantitative easing (QE) – the BoE buying government bonds and corporate bonds – is one way to do this. And cutting interest rates is another.

Mr Zangana went on to explain what consumers could see, should interest rates enter negative territory.

“If interest rates are cut so far that they fall below zero, the theory should still apply – negative rates should encourage borrowing and discourage deposits and savings,” he said.

“But, in practice, negative interest rates can result in some bizarre outcomes – for savers and mortgage holders.

“If they cannot do this, then some banks have simply reduced lending, which may be the worst possible outcome given the policy’s intention is to stimulate business activity.

“In this topsy-turvy scenario, the lender would actually pay the borrower. In some European countries, where central bank rates have been below zero for several years, mortgages at sub-zero rates – or ‘reverse-charging’ – are no longer so unfamiliar.

“Put another way, if your mortgage comes with a negative interest rate, you’ll end up paying back less than you borrowed.

“Where this happens, the bank doesn’t actually make monthly payments to the borrower.

“Instead, the bank reduces the outstanding capital, thereby accelerating how fast the borrowers reduce their debt. Clearly, where interest rates are negative, there is little incentive for the mortgage borrower to repay debt.

“Negative interest rates penalise consumers and businesses for keeping savings in their bank accounts, as their value would decrease over time. To avoid charges, some households could even decide to withdraw savings from banks and instead invest in a home safe.

“Not only is this a security risk, but the withdrawal of assets from financial institutions reduces liquidity and the ability of banks to lend.”