The Nationwide FlexDirect account was launched by the building society back in 2012, offering an interest rate of five percent. However, following the Bank of England’s two successive cuts to the Bank Rate in March, those with this current account are among those to see interest rates cut.

The Bank of England Base Rate cut – an emergency response to the coronavirus crisis – saw the Bank Rate drop from 0.75 to 0.25, ahead of a further reduction to 0.1 – a historic low.

And, in April this year, Nationwide announced the cuts meant the building society would be making a number of changes to savings and current account interest rates.

Despite the FlexDirect account rate having been protected since its launch, the building society said it is among those now being changed.

It meant that from May 1 2020, Nationwide’s FlexDirect account pays credit interest of two percent (1.98 percent gross) on balances of up to £1,500 for the first 12 months. 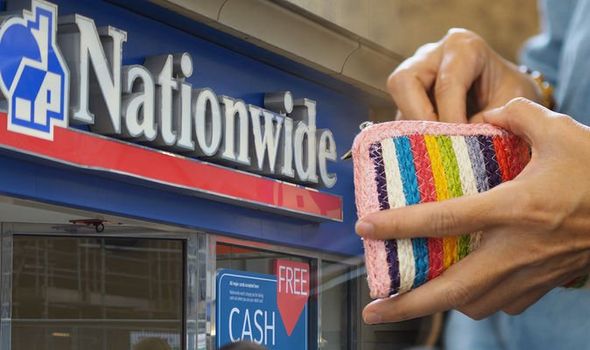 Any FlexDirect accounts which were applied for prior to May 1 will continue to receive credit interest of five percent AER (4.89 percent gross) on balances of up to £2,500 for the remainder of their 12-month introductory period.

The Nationwide website tells savers that they need to pay in £1,000 a month, not counting transfers from other Nationwide accounts or Visa credits, for these rates.

Meanwhile, those who are existing FlexDirect members and who are outside of the introductory period will see a change from next month.

This is because these people will have their credit interest rate reduced to 0.25 percent AER, on balances of up to £1,500, from July 1 – down from one percent AER.

Meanwhile, Nationwide’s FlexStudent and FlexGraduate accounts will no longer offer credit interest from July 1 2020, while the credit interest on the Society’s FlexOne will be reduced to 0.10 percent.

Nationwide said that these changes will affect both existing account holders and anyone opening these accounts from that date.

All current account holders who are impacted will be written to and notified of the change in credit interest rate, the Society said.

Sara Bennison, who oversees Nationwide’s products and propositions, said: “We know that this is a tough time for savers, particularly after two cuts in Bank Rate in quick succession taking it to an historic low of only 0.10 percent.

“In order to preserve the long-term sustainability of the Society for all our 16 million members, we have had to take these decisions on the interest rates we can offer on a number of our accounts.

“We have tried to remain as competitively priced as possible, with our FlexDirect account, for example, remaining one of the best in the market for credit interest and our savings prize draws helping people into good savings habits.”

Managing Director of Marcus by Goldman Sachs, Des McDaid, said: “We are temporarily not accepting new applications for our Marcus online savings account in order to manage our rate of deposit growth.

“This step will allow us to continue providing great value to our existing customers. We remain committed to expanding our UK retail business in future.”

Marcus – which is operated by the investment bank Goldman Sachs – is reassuring existing customers that they will be unaffected by this change, and still able to manage their accounts and get in contact as normal.

The online easy access account was launched in September 2018, with more than 500,000 customers having opened an account so far, depositing a total of more than £21billion, the bank said.

The interest rate offered on the account had been reduced in recent months, currently offering existing account holders 1.05 percent on savings between £1 and £250,000.