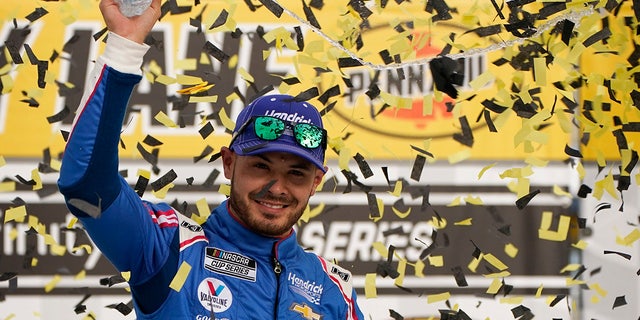 Hendrick took a chance signing Larson from a public relations perspective after he was cleared to drive following last year’s suspension for using a racial slur during a live-streamed virtual car race in April.

Larson, a Japanese American, spent much of the year educating himself on the difficulties Black Americans face by meeting with community leaders and organizations in an effort to win back people’s confidence in his character.

“That night was just a bad lapse of judgment,” the 28-year-old said.

Larson said his job now is to show people who he really is and represent his team and those close to him in a good light.

“I know there’s always going to be doubters, and that’s something I’ve accepted.”

Larson’s car has been running only with Hendrick-backed sponsorship so far, but Cincinnati Inc. has signed on for two future events and Freightliner is debuting on the No. 5 Chevrolet Camaro for the Food City Dirt Race at Bristol Motor Speedway on March 28, which Larson is the odds-on favorite to win.

Larson is a dirt track specialist. He won 43 sprint car races last year along with the Chili Bowl Nationals midget car event in January. Bristol marks the first time the Cup Series has raced on dirt since 1970.

“I’m definitely looking forward to it and I know the fans are, as well.”