The House of Representatives could move forward on Democrats’ agenda with a procedural vote Tuesday as House Speaker Nancy Pelosi (D-Calif.) tries to strike a deal with centrist Democrats who blew up the original plan to vote Monday night.

The moderates, led by Rep. Josh Gottheimer (D-N.J.), threatened to vote against a high-priority budget resolution this week because they wanted the House to vote first on a bipartisan infrastructure bill that passed the Senate earlier this month.

Pelosi has tried to mollify the moderates with some obscure parliamentary maneuvering and the promise of a vote on the infrastructure bill before October.

The nonbinding pledge would be folded into a procedural measure, known as a “rule,” that sets parameters for debate on the House floor. Democrats scheduled a Tuesday afternoon vote on the rule, which will set up a separate vote on a voting rights bill ― but no vote on the more controversial $3.5 trillion budget resolution.

Democrats added language to the rule that says the House will have “hereby adopted” Democrats’ budget resolution without a separate vote. That means moderates wouldn’t have to take a position on the budget itself, which they insisted should not receive a vote before the infrastructure bill.

“When we bring up the bill, we will have the votes,” Pelosi said to reporters, suggesting she’s not yet certain the measure can pass. 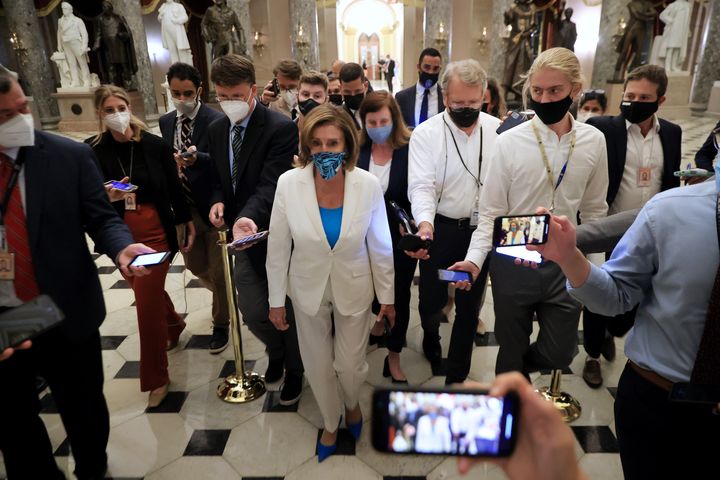 For months, President Joe Biden and party leaders on the Hill have said they would pass the infrastructure bill in tandem with the budget, which Democrats have said will include universal pre-kindergarten, free community college and an extension of monthly checks for parents, among other things.

But Gottheimer and his centrist colleagues began to insist that the House pass the infrastructure bill without waiting for the budget bill, which House committees have only just started to draft.

Gottheimer and Rep. Henry Cuellar (D-Texas) spent Monday evening negotiating with Pelosi in the speaker’s office. Emerging from another meeting in Pelosi’s office on Tuesday, Gottheimer said they were within “inches” of a deal.

House Rules Committee Chair Jim McGovern (D-Mass.) told HuffPost that Democrats were revising the draft rule to strengthen the commitment for an infrastructure vote on Sept. 27.

“My job is to make everyone happy so that’s what I’m trying to do,” McGovern said.

Rep. Richard Neal (D-Mass.), a Pelosi ally, said Tuesday that the moderates had painted themselves into a corner by making demands in newspaper opinion pieces, and he criticized them for fussing over the rule this week instead of the actual budget legislation next month.

“I think if you’re going to dig in, there’s other places you can dig in to do better negotiating,” Neal said. “I’ve been a bit surprised by the reluctance of some to grasp the whole role that procedure plays.”