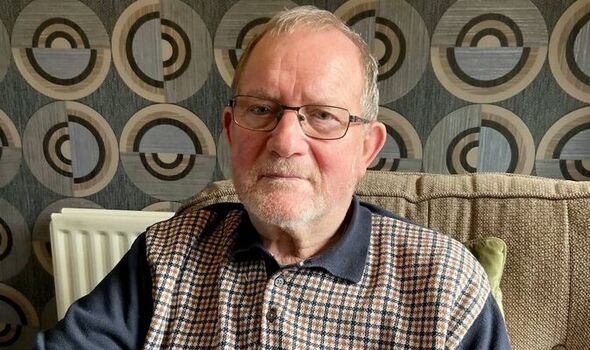 James Colderley, 79, qualifies for the princely sum – which amounts to £13 a year – as he is about to turn 80. However, Mr Colderley, who worked for more than 50 years in labour-intensive jobs, thought the figure was a mistake.

Learning that the meagre amount was in fact correct after a lifetime of graft left the granddad of five “disgusted”.

Mr Colderley, who lives near Oldham, started his first job as an apprentice bricklayer when he was just 15 years old.

He went on to work in telesales before spending 20 years delivering carpets. He then worked as an HGV driver for 30 years and retired at 67.

He said: “I’ve never left a job of my own accord, only because of redundancy as the firms closed, then I went round, knocked on doors and got another job.When I worked for a company delivering carpets, I was leaving at 6am in the morning and coming back at 7pm because we had three young children and not much money.

“I worked hard, 14 hours a day at times. I never claimed benefits, I never even claimed sick money.

“I’ve gone to work when I’ve been ill and when I broke my hand.”

A letter from the Department for Work and Pensions (DWP) arrived last week stating that, from September, Mr Colderley qualifies for the Age Addition, a State Pension bonus for over-80s introduced in the early 1970s. But the amount has been frozen since 1972.

Mr Colderley was left wondering if somebody was having a laugh at his expense and phoned the DWP to discuss the matter. But he gave up after he was left on hold for 20 minutes. He said: “I just wanted to speak to them and ask was the date April 1st? It was like an April Fool’s joke to me. The paper costs me 70p each morning. That’s 25p towards one paper.

“Give it to charity, it’s not going to affect my life. What would 25p buy you? And that’s a week, not a day. You live until you’re 80, you’d think they’d give you something decent.

I’d have sooner not known. It makes a mockery of the money the Government’s giving out.”

A DWP spokesman said: “This Age Addition is linked to legislation from the early 1970s. Since then, a range of new targeted measures have been introduced to support the older pensioners.”