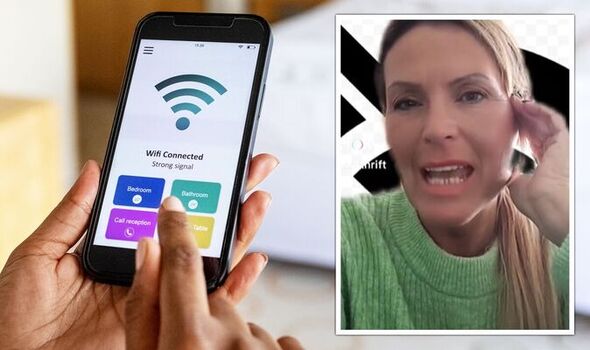 The UK mum has been sharing her tips for saving money on energy bills, which she implements at home with her large family. The clever saver has 30.5K followers on her TikTok account @duchessofthrift.

She has recently detailed a wi-fi trick to keep energy usage low at night. But, the savvy method may not go down too well in homes with teenagers. She explained: “We’ve managed to save a little bit extra on the energy and it’s really random, but before when we went to bed we left the wi-fi on.

“I’ve got older teens and very often I’d go to bed early and the teens would stay up with their smart tellies on and they’d be on their phones. If they went downstairs they’d make extra drinks, some toast, and they’d cook snacks. They’d leave lights on all night.

“So, as an experiment, the wi-fi has gone off at night. There’s a curfew, at 10 o’clock, the wi-fi goes off. The kids don’t have huge data bundles, and as a result, there’s nothing for them to do, so they’ve gone to bed.”

The Duchess of Thrift found many unexpected upsides to the new regime. She said: “There have been several benefits to this. One, it’s easy to get them up for school in the morning.

“Two, we’ve saved money overnight – there are no lights left on in the house, those extra boils of the kettle, the toaster, the microwave, all the things that they were using when we went to bed are no longer being used. And the TVs are off, of course. Very often they’d fall asleep with them on, so it’s an extra way to save a little money.

“It’s taken four days and the kids have adjusted to it. There were complaints on day one and now they’ve adjusted to it and just accepted that they go to bed on a school night. On weekends they can stay up a little later and have the wi-fi on. It’s worked and no one has gone absolutely crazy.”

A number of her fans commented on their own experiences with this kind of curfew. One wrote: “My kids have all devices removed at 11pm. At the weekend my 19-year-old is on his PS4 until 3am.”

Another said: “My grandson said he felt much better after good night’s sleep when his mom turned the wi-fi off.” Another wrote: “Mine used to sneak back down once I was asleep and put it back on.”

Another TikTok content creator showed a way to save money on your energy bills by changing a setting on your boiler.

Beth, the “Budgeting Mum” lives in the Midlands with her two children. Beth said: “I just had on boiler service done and while the engineers were here I asked him what we can do to make this combi boiler more economical and save some money on the gas.

“He said the one thing that you can do is the radiator setting. So, here it’s on an economic setting, but he said you can turn this down.”