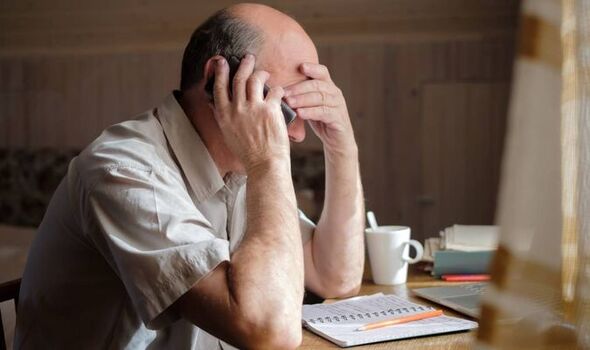 The amount they will need to spend to cover the rising cost of necessities like food, fuel and energy will jump from 67 per cent of their pensions in 2021/22 to 79 per cent in 2022/23

Almost half (960,000) are already living in poverty or just above the poverty line, according to the latest analysis by Age UK.

There is increasing concern that many pensioners will be unable to meet other expenses – and the situation will be worse still for those with disabilities or ill-health who have higher energy needs.

More than half (51 per cent) of the over 70s are already spending less on non-essentials.

Caroline Abrahams, charity director at Age UK said: “Our new analysis shows the brutal impact that rocketing prices are having on our older population and lays bare the desperate situation facing almost a million pensioners next year.

“I’m astonished that the bad news about prices keeps rolling in but the Government continues to sit on its hands, and from what we hear many older people are surprised and disappointed too. There must be more that Ministers can do to help.

“Significant numbers of older people are already struggling, and the Bank of England was crystal clear last week that it’s only going to get worse in the months to come.”

“For older people on low fixed incomes, relying solely on their State Pension and benefits, it’s a terrifying prospect because there are simply no more cuts they can make.

“Without determined government intervention they are at risk of deep hardship like nothing we’ve seen in this country for many years.”

The charity wants the Government to increase benefits and the State Pension in line with inflation and is also calling for a one-off payment of £500 for those on the lowest incomes to mitigate the impact of energy price increases.

Recent official figures show the proportion of older people reporting an increase in their cost of living over the previous month has been steadily increasing since November 2021.

This compares to 71 per cent in the older group when asked in November 2021.

Among those aged 70-plus who reported an increase in their cost of living, the most common reasons given were rises in the price of food shopping (96 per cent), gas or electricity bills (80 per cent) and in the price of fuel (81 per cent).

One caller to Age UK, a gentleman in his mid-80s, said: “I will have to cancel my carer – I prefer to be warm and dirty than clean and cold.”

And a couple in their mid-70s said: “When it’s cold, we go to bed much earlier to keep warm. We used to bathe daily but this will now be cut to twice a week.

“I think this says it all, we simply cannot afford to pay these rip-off prices anymore.  What’s the point of life?”

Jan Shortt, general secretary of The National Pensioners’ Convention, said: “People on low and fixed incomes pay a much higher proportion of their income on essentials – there is no way they can find the extra money when costs rise so rapidly.

“Spiralling energy costs, rocketing inflation and a succession of government policies which have lowered the real value of pensions and benefits, mean millions more face poverty in the coming months.

“It is a disaster that is only set to get worse as we approach autumn and another round of energy hikes.”

Typical households of all ages could be left around £100 per month short of what they need to cover their spending in just two years’ time on average, as costs rise faster than incomes, another study suggests.

By 2024, average weekly incomes could increase to £680 by 2024 – while average weekly UK household spending may reach £705 as energy prices and other costs push up the prices of goods and services.

This projected gap adds up to a shortfall of around £100 per month, according to the Yorkshire Building Society, which commissioned the report from the Centre for Economics and Business Research.

Nitesh Patel, strategic economist at the mutual, said: “Costs are rising at a considerably higher rate than income and will soon overtake income altogether.”

As part of Age UK’s ‘It Doesn’t add up’ campaign, the Charity is urging older people to complete a short survey to explain how the rising cost of living is affecting them. They will use the evidence to press the Government for more financial support. To take part, please click here.