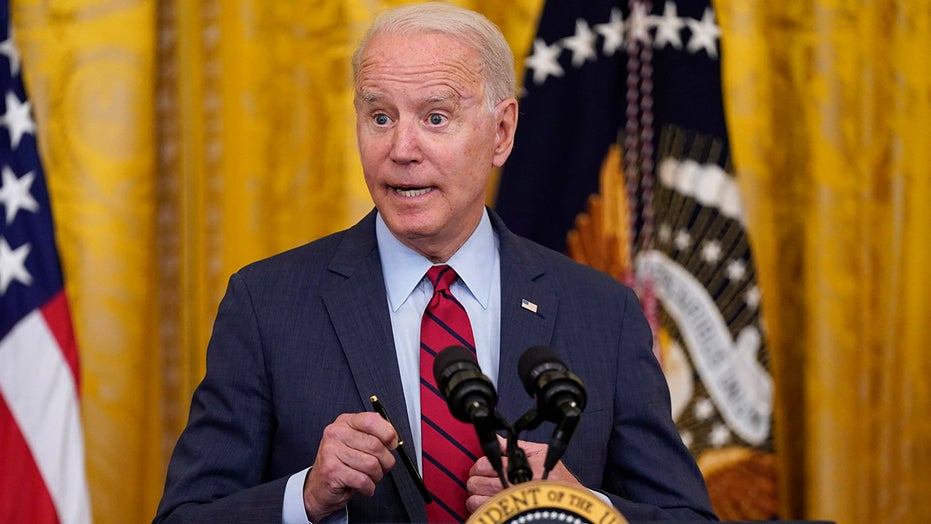 President Biden dramatically whispers for effect in his speeches and remarks.

President Biden at times whispers for effect in his speeches and remarks, and if he does it to get his words more attention, it’s worked.

He was at it again during an address in Pittsburgh on Friday, dropping his voice to dramatically proclaim he’d won “every precinct” in Scranton, Penn., during his election, and later noting a positive development about General Motors.

“Today, right here in Western Pennsylvania, the Union Pacific Railroad is announcing the largest purchase of American-made battery-electric locomotives in all of history. And, by the way, guess who’s supplying those batteries?” he asked. “General Motors,” saying the last part in a whisper.

Biden’s habit always causes a buzz, with some deriding the habit as “creepy” – even Biden supporter and comedian Stephen Colbert has poked fun at it – while some supporters and observers say it’s a method of emphasizing a point in a way not normally employed by politicians. The Associated Press spoke to communications experts in July about Biden’s whispering, with one Vanderbilt professor calling it an “intimate form of communication.”

In June, he did it several times during one question-and-answer session with reporters.

“I got them $1.9 trillion in relief so far,” he whispered to a reporter when asked about additional coronavirus relief for families. “They’re going to be getting checks in the mail that are consequential this week for child care.”

Later, he whispered, “I wrote the bill on the environment,” and at another point he whispered employers worried about workers taking unemployment benefits rather than returning to lower-wage jobs should “pay them more.”

He’s also whispered in the last year to make points about raising taxes on higher earners and other pet issues.

He hasn’t just done it as president. Biden has employed the method going back to his vice-presidential days; at one point during the 2016 campaign, he whispered to ABC’s George Stephanopoulos that there was no way Bernie Sanders supporters would decamp for Donald Trump when it was him versus Hillary Clinton.

“I know you can’t vote for Trump,” Biden whispered what he would say to Sanders supporters, leaning in close to Stephanopoulos. “I know.”