Competition could heat up in Australia’s flu vaccine market, which dominated by CSL, as Moderna pushes forward with local research into new flu shots and a combined flu/COVID vaccine.

Moderna’s managing director for Australia and New Zealand, Michael Azrak, said Moderna will continue to focus on respiratory virus vaccines, and is hopeful it can develop a combination shot that would be useful as COVID becomes endemic. 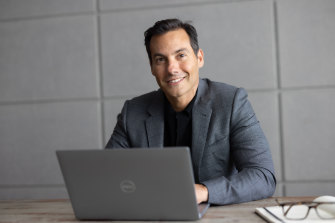 Michael Azrak is leading Moderna’s surge into the Australian market.

“It’s all about improving public health. Compliance [with vaccines] is an issue — and it would be a wonderful invention for physicians or a pharmacist to be able to say, ‘Would you like your COVID/flu shot?’” he said.

Moderna is also working on a new vaccine solely for flu. If successful, the products could eventually be made onshore at the company’s messenger-RNA manufacturing plant, which will be built in Melbourne as part of a deal with the federal and Victorian governments.

Moderna’s entry into manufacturing in Australia means the country will eventually have two cutting-edge vaccine manufacturing plants in Melbourne, the second being CSL’s $800 million cell-based flu vaccine facility, which is set to be ready by mid-2026.

CSL is working on its own mRNA flu vaccine, but the company has signalled it will not be influenced by other biotechs such as Moderna to expand further into mRNA products.

mRNA, or Messenger-RNA, is a type of vaccine technology first pioneered in COVID vaccines where the vaccine delivers genetic ‘blueprints’ to cells to teach the body to fight a disease, unlike traditional vaccines, which contain a weak or inactive form of a virus.

Mr Azrak, who was formerly managing director of pharma giant MSD Australia, would not be drawn on the impact that Moderna’s market entrance might have on CSL or the number of flu vaccines available in the country. However, he said he welcomed any innovation or research competition in Australia.

Moderna’s COVID-19 vaccine is its first commercial product, but the Massachusetts-based biotech has long been focused on using messenger-RNA technology for a range of medical treatments.

Earlier this week, the company outlined its global health strategy, pledging to launch vaccine programs for 15 diseases that pose a particular threat to low and middle income countries by 2025. This includes work on vaccines for HIV, tuberculosis and malaria.

The company also launched a program called ‘mRNA Access’, which will let medical researchers use Moderna’s technology platform as part of their own work on medicines for neglected diseases.

Mr Azrak said Australia’s medical research landscape had influenced his company’s decision to set up shop here and that there were already advanced discussions with academic institutes about how they could use mRNA Access.

“This is where I see Australian researchers having a great opportunity to engage with Moderna,” he said.

The company is also looking at bringing more of its medical research onshore.

“We do want to definitely look at Australia as a key country for our clinical trial platform,” he said.

Moderna hopes to launch its local manufacturing plant by the end of 2024, and will soon embark on a hiring spree to ensure it has enough talent to staff it. The company will also be speaking to Australian universities about its current and future talent needs.

“We will have the need for quite a number of science grads and PhDs,” he said. “The plant is a 10-year partnership. It is going to be very, very heavily dependent on highly educated modern manufacturing graduates.”