The mainstream media was silent on alarming findings from the House Foreign Affairs Committee Republicans’ probe into the possible origins of COVID-19 on Monday, despite one lawmaker calling it the “greatest cover-up in human history.”

The bombshell findings made the most detailed case yet that the coronavirus pandemic resulted from a leak from a Wuhan virology lab, but CNN, MSNBC, ABC News, NBC News and CBS News all failed to cover the report.

Fox News contributor Joe Concha said there are multiple reasons why corporate media has shielded Americans from the news.

“It serves as a reminder that when they rushed to judgement, because … a Republican like Sen. Tom Cotton who said that this can come from a lab, that being COVID, or when President Trump echoed the same thing, they were portrayed as reckless conspiracy theorists,” Concha said Tuesday on “Fox & Friends.” 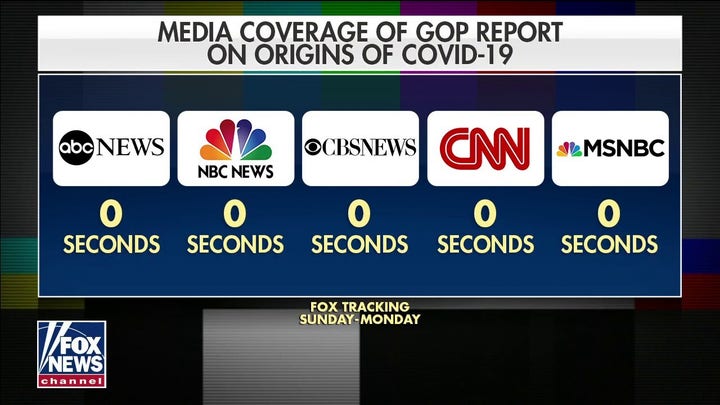 “When you think about it, coming to that conclusion must have been really hard unless, you know, you’re partisan and trying to push a narrative because there were barely any boots on the ground in China,” Concha said. “Wall Street Journal, Washington Post, New York Times all had journalists expelled from China at the onset, the very beginning of the pandemic, so it was impossible to verify anything or get answers.”

Concha said that finding the origins of the pandemic is “the most important investigation we can do of our lifetimes” because history will repeat itself if we don’t learn how the pandemic began.

“Up until earlier this summer … Facebook would suppress, censor any post about COVID originating in a lab in Wuhan, China. Why is that the job of a social media giant like that? And many in the media and Democratic party called it misinformation,” Concha said. “Now, suddenly it’s a real possibility. Even Democrats are conceding that.”

Concha noted that trust in media is at an alarming low and ignoring stories like the the GOP report on COVID’s origins aren’t helping restore credibility.

Rep. Michael McCaul, R-Texas, shared the findings and accused the Chinese Communist Party (CCP) of engaging in the “greatest cover-up in human history” during an appearance on “America’s Newsroom.”

“They were playing with fire,” McCaul said. “They were genetically manipulating at the lab this gain-of-function that was taking place.”

Many of the key points from the report focused on activities in and around Wuhan that appeared to indicate the virus may have been circulating in China as early as September, well before the World Health Organization’s Country Office in the People’s Republic of China picked up a press statement on December 31, 2019, by the Wuhan Municipal Health Commission from their website on cases of “viral pneumonia” in Wuhan.

In September, the Wuhan lab’s genetic sequencing database was taken offline in the middle of the night, which according to McCaul, showed they were trying to “hide” or “cover up” something of significant concern.