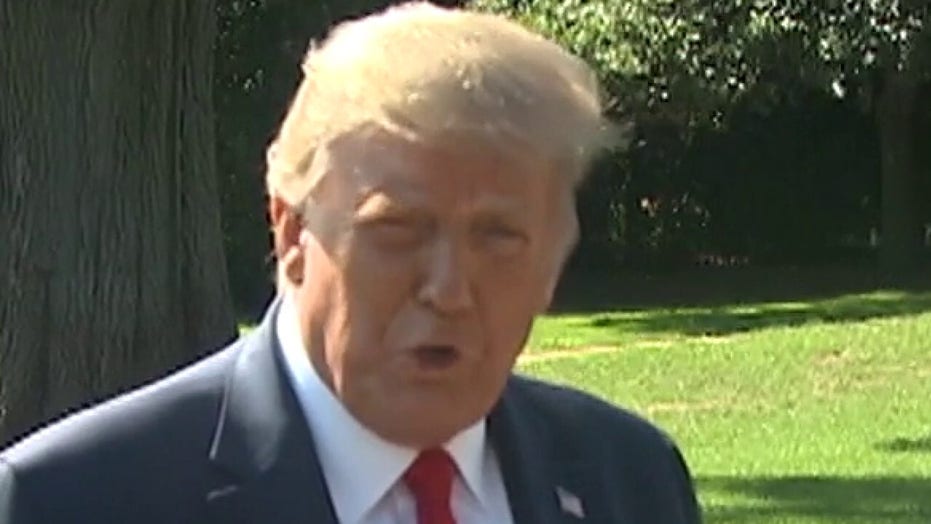 White House press secretary Kayleigh McEnany defended President Trump on Thursday over the fallout from comments he made during this week's debate about the "Proud Boys" and said he has “denounced white supremacy” repeatedly, calling his record on the issue “unmistakable.”

McEnany, during a heated White House press briefing on Thursday, called the news coverage of the president's comments “shameful” and claimed the media “refuses” to cover his response.

“The president has denounced white supremacy, the KKK, hate groups of all forms, he signed a resolution—just last week, he expressed his desire to see the KKK prosecuted as domestic terrorists,” McEnany said.

“His record on this is unmistakable and it is shameful the media refuses to cover it,” McEnany said.

“His record is not mixed in the slightest,” McEnany said.

The questions came after a moment during the first presidential debate when moderator Chris Wallace of "Fox News Sunday" asked the president if he was willing to denounce white supremacists.

The president responded, “Sure, I’m willing to do that, but I would say almost everything I see is from the left-wing, not the right-wing. I am willing to do anything. I want to see peace.”

The president’s response sparked an intense moment with the former vice president.

“Who do you want me to condemn?” Trump said. "What do you want to call them? Give me a name.”

The Proud Boys have been designated a hate group by the Southern Poverty Law Center, and have held multiple events in Portland, alongside other right-wing groups. The gatherings have sparked some violent clashes with left-wing counterdemonstrators.

Biden interrupted, calling Antifa “an idea, not an organization.”

Trump fired back saying,  “Oh you’ve got to be kidding.”

“When a bat hits you over the head that's not an idea,” Trump said. “Antifa is bad.”

The day after the debate, and amid mounting criticism from the media, the president, again responded to the question from reporters.

“I don’t know who the Proud Boys are. I mean, you’ll have to give me a definition because I really don’t know who they are,” Trump told reporters at the White House. “I can only say they have to stand down and let law enforcement do their work.”

McEnany on Wednesday slammed reporters for repeatedly using “Proud Boys” in their stories and headlines, saying that it is giving them “public circulation.”

“The president did denounce them,” McEnany said. “Stand back, he said, and he said stand down specifically—a synonym with stand back.”

She added: “He didn’t know what the Proud Boys were.”

“The president, specifically, verbatim was asked white supremacy —do you denounce them—

He said I have always denounced any form of that,” McEnany explained.

She went on to slam reporters and the media for having “turned a blind eye to Antifa.”

“Ideas do not burn down buildings, ideas do not kill innocent Americans,” McEnany said.

Earlier this week, Trump campaign communications director Tim Murtaugh, in an interview with Fox News, said that the president has “repeatedly, over the course of years now, denounced white supremacists and has been consistent in doing that,” and said he did so “twice” during the debate.

“The media keeps asking him to denounce white supremacy, and he keeps doing it,” Murtaugh told Fox News. “At a certain point, they are going to have to take yes for an answer.”

“Just last week, the president declared the KKK a terrorist organization and it cannot be any more clear than that,” Murtaugh said, pointing to the president’s Black America Plan, also known as the “Platinum Plan.”

The “Platinum Plan” states that it will “prosecute the KKK and ANTIFA as terrorist organizations and make lynching a national hate crime.”

The plan also pledges to increase access to capital in Black communities by nearly $500 billion and vows to make Juneteenth a national holiday.